COVID: India to allow Amarnath pilgrimage despite surge in cases | Asia | An in-depth look at news from across the continent | DW | 26.04.2021

COVID: India to allow Amarnath pilgrimage despite surge in cases

Critics have said the annual Amarnath pilgrimage could lead to a devastating wave of the coronavirus in India-administered Kashmir, which has underequipped health care facilities. 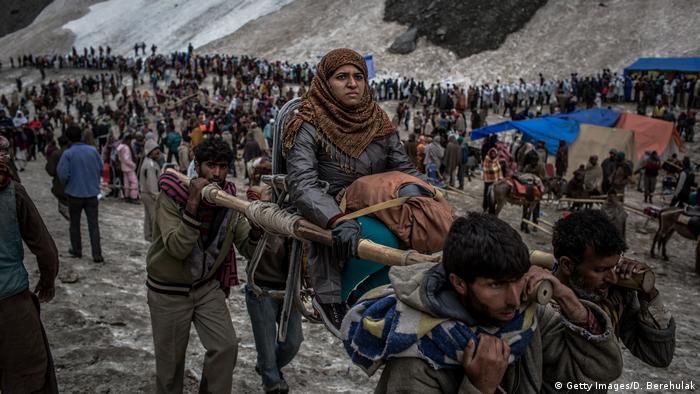 Pilgrims will visit the Amarnath cave shrine, perched 3,880-meters (12,730 feet) above sea level in the Himalayas

The local government in India-administered Kashmir is contemplating setting up makeshift shelters and facilities for 600,000 Hindu pilgrims for the annual Amarnath pilgrimage, which it intends to host this summer despite the ongoing coronavirus pandemic.

The pilgrims will visit the Amarnath cave shrine, perched 3,880-meters (12,730 feet) above sea level in the Himalayas.

The government will set up two base camps — one called Baltal and another called Chandanwari — for the pilgrims, who intend to make the journey on foot. From Baltal, the pilgrims will have to walk a distance of 14 kilometers (9 miles), while those approaching Chandanwari will have to trek 32 kilometers to reach the cave shrine housing the ice stalagmite, referred to by Hindus as the Shiv Lingam (the phallus of Lord Shiva).

Although authorities have temporarily suspended online registration for the pilgrimage in the wake of a spike in daily coronavirus cases, the site still says that the pilgrimage will take place as scheduled from June 28 through August 22.

Recently, hundreds of devotees, including nine top saints, tested positive for COVID-19 in the northern city of Haridwar, where hundreds of thousands of devotees gathered to participate in the Kumbh Mela festival.

Television images of a crowd of devotees taking a ritual bath together in the Ganges River in blatant violation of social distancing rules triggered calls for authorities to call off the event. However, the suggestions were scorned by the local government, which gave preference to the festival, ignoring the reality that the virus was spreading faster.

The congregation of devotees during the pandemic has raised concerns among health experts in the region, who believe that the Amarnath pilgrimage could unleash disaster in Kashmir.

"The situation is bad across India. It would be better if the Amarnath pilgrimage was symbolic this year, and if just a few people were allowed to visit the shrine. Otherwise, it will be a catastrophe," said Tanvir Sadiq, a senior leader of Kashmir's grand old political party, National Conference.

It could prove to be a "fatal superspreader" event given the ill-equipped health care system in the region, Sadiq said.

On January 25, the government announced it was undertaking preparations to host about 600,000 pilgrims this year. Government insiders have said misplaced faith in the concept of herd immunity and unrealistic mathematical models are behind the government's plans.

'Everything seems to be collapsing'

"With the launch of the vaccine and the daily caseload going down, authorities lowered their guard and allowed a full resumption of activities, and now everything seems to be collapsing," a senior official in civil secretariat Jammu, who asked not to be named due to the sensitive nature of the subject, told DW.

The Shri Amarnath Shrine Board (SASB), which organizes the pilgrimage, said at least 30,000 devotees from different parts of the country registered for the event in April.

The annual pilgrimage was suspended in 2019 and 2020, first due to New Delhi's decision to end the region's special constitutional status and later due to the first wave of the pandemic.

Even after the Kumbh Mela proved to be a superspreader event, resulting in a major surge in new infections and deaths in India, authorities have yet to heed the lessons from the virus.

This year, the ruling Bharatiya Janata Party (BJP) lost one of its senior leaders — Jammu and Kashmir former minister Thakur Puran Singh — to COVID-19. Singh had gone to participate in Kumbh Mela, and showed signs of infection upon his return.

Scores of devotees who returned from the festival have also tested positive in the Hindu-dominated Jammu region.

Since August 2019, officials have been pushing to exhibit a sense of normality in Kashmir by inviting film actors, conducting fashion shows and opening tourist spots.

Locals say New Delhi is trying to use the Amarnath pilgrimage to further its nationalist agenda and showcase the return of normality in the region.

Kashmir has meager health care facilities, with just 2,599 COVID beds, including 324 intensive care unit beds, for a population of 13 million. At least 1,220 of those beds are already occupied.

The health advisory issued for the Amarnath pilgrimage makes no mention of the virus, and how pilgrims should behave in view of the accelerating second wave of the pandemic.

"It can prove fatal both to pilgrims as well as locals, because oxygen levels are low at high altitudes, and this disease mainly targets our respiratory system. It can prove to be a superspreading event and overwhelm our poor health care system. The government should behave responsibly and call off the pilgrimage," said Sheikh Ghulam Rasool, a prominent social activist.

Over 2,300 new infections and 21 deaths were recorded in the region on Sunday. Nearly 200 of those cases were on the part of travelers and migrant laborers.

Over 100,000 tourists have visited Srinagar in the past two months to escape both the heat of the Indian plains and the lockdown. This unregulated rush of tourists has propelled the local surge in new infections.

'Any gathering is concerning'

"Any congregation at this point is a cause for concern because with the way the second wave of the pandemic is accelerating, we can't say when it is going to stop," said Anoop Nautiyal, founder of Development for Communities Foundation in Uttarakhand, who has been closely tracking the outbreak at Kumbh Mela in Haridwar.

"In spite of the government's best efforts to promote COVID-appropriate behavior, what we have seen on the ground, is that it's difficult to implement all of these guidelines when people congregate in such large numbers," he said.

Analysts say that for the Indian government, promoting tourism in Kashmir is a high-priority project, as officials see tourism in the region as a sign of a return to normality.

Several BJP politicians have described the influx of tourists in Kashmir as a way of measuring how people in Kashmir have accepted the new political reality, after the change in its semi-autonomous status.