Kashmir: Artisans fight for survival amid dying art of pottery | Asia | An in-depth look at news from across the continent | DW | 27.10.2021

Waning demand and the impacts of the COVID pandemic have pushed Kashmir pottery to the brink of extinction. But some artisan families are continuing the craft in exchange for rice just to survive. 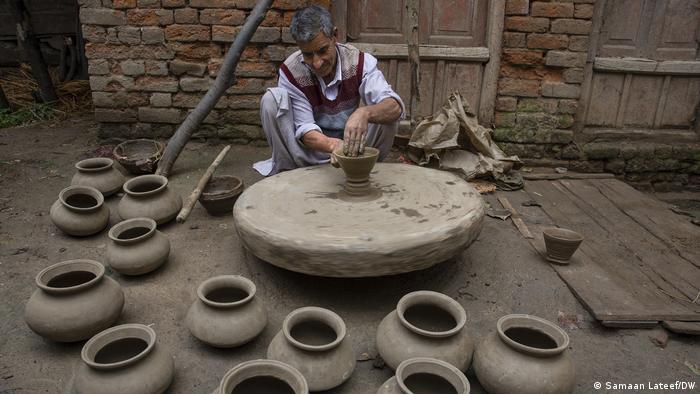 If he couldn't barter his goods for food, 70-year-old Muhammad Jamal Kumhar says his family would starve

As the paddy harvest season nears its end with the onset of winter, Dilshada Bilal, 35, is busy producing earthenware, including fire pots and electric cooking heaters.

Her modest workshop in the village of Larm-Ganjipora in southern Kashmir's Anantnag district has a potter's wheel, an oven, and storage space for her work.

She lives a few meters away in a traditional Kashmiri brick house. The sparsely populated village is made up of a few mud roads and a vital stream which is the only source of water for inhabitants.

Bilal and her family are among the 27 Kumhar families, a historically marginalized people traditionally associated with the art of pottery, living in the region.

A mother of three, Bilal has been creating various earthenware objects for nearly two decades.

She learned the craft from her father when she was a young girl. But now, most of the new generation of potters are abandoning the occupation.

"Due to lack of demand, this craft is on the verge of extinction. There is hardly anyone who pays cash for our products," Bilal's father-in-law, Muhammad Jamal Kumhar, tells DW.

Bilal and her family, however, continue the art to survive.

"Most of us gave up on this craft because it won't give you adequate income to sustain [a living]. But my family had no other way to generate income — though meager — so we continued," Bilal tells DW. 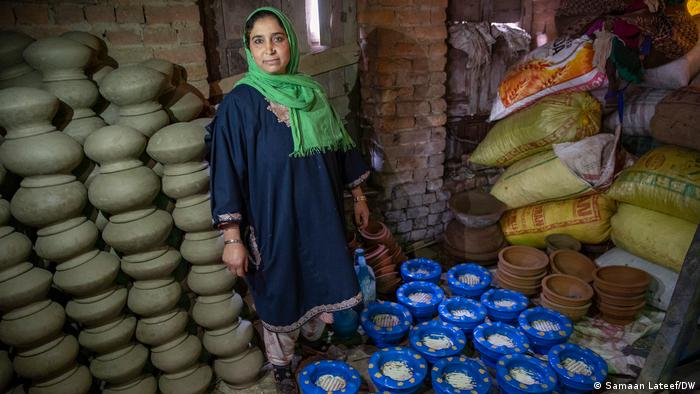 Kashmir pottery on verge of extinction

Pottery as a craft in Kashmir can be traced to the Neolithic settlement during 3000 to 1200 BC at Burzhome, in the outskirts of Srinagar, according to Adil Zubair, an assistant professor of history at Ambedkar University in New Delhi.

In rural areas of Kashmir, clay-made utensils are still used for the storage of water and grains. Traditional musical instruments made from clay like the Tumbakneer (goblet drum) are still widespread.

Kumhar, 70, says his family — like many others across Kashmir — has been associated with the craft for centuries. His grandfather taught him pottery skills as a child.

As modern kitchenware replaces earthenware, however, Kumhar says the lack of government support to facilitate innovations in their craft has led to its near extinction.

"Now, our children are taking up different occupations and becoming drivers, carpenters, among others, to sustain their families," he says.

Zubair warns that the decline of Kashmir pottery is irreversible owing to the introduction of metal and plastic utensils.

"It has gone out of fashion, and now the government has introduced studio pottery where decorative cups and mugs are being made, but that's not a traditional craft," he says. 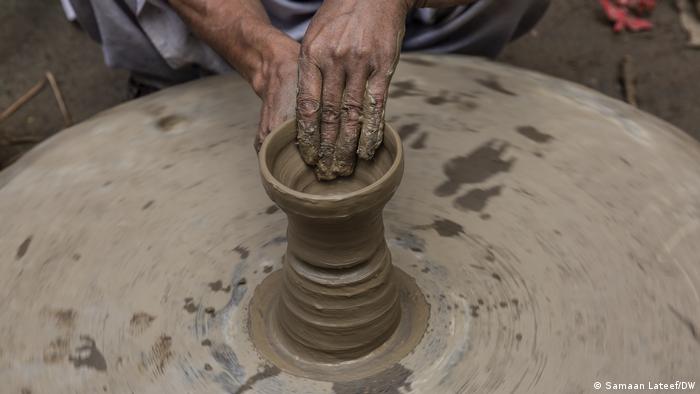 Muhammad Jamal Kumhar, 70, molds the clay on a potter's wheel

Bilal recalls how she felt obligated to continue the craft after marriage and throughout motherhood.

"We don't own land, and my kids are growing, so I have to make a living, hand to mouth," she says, adding that she spends most of her time helping her father-in-law make clay-made products.

Kumhar goes around villages and sells the products in exchange for rice.

For a heater, the villagers pay him 20 kilograms of rice; for a firepot he gets nearly 10 kilograms.

"The barter trade is the only way to sell our products to create some income, otherwise we will starve to death," he says.

But the COVID-19 pandemic has dealt a blow to the potter community.

Kumhar says the pandemic has further impoverished his family and stunted their social mobility as restrictions on public movement hinder them from entering localities to sell their products.

Tandoors offer a glimmer of hope

Meanwhile, potters in the village of Palhallan in northern Kashmir are fighting against the odds to keep their tradition alive.

Here, around 35 to 40 families have been making tandoors (cylindrical clay ovens) used by bakers, restaurants and hotels across Kashmir and in parts of India.

Abdul Rashid, 47, a well-known potter in the village, says the tandoor is the only hope of survival for the dying art of pottery.

In 2005, Rashid's family switched to tandoor making, which he says provides them with "enough income" to sustain their families.

It takes two weeks to make a tandoor, Rashid says, from molding and shaping the clay to drying it under the sun.

Afroza Begum, 38, of northernKashmir'ss Manigam village, says pottery is an art passed on by forefathers and is here to stay.

"Art never dies, it will keep changing its forms and will survive in various forms," she said.