The dying art of papier-mache in Kashmir

Ruptured by conflict and the pandemic, a trade that dates back to the 14th century will soon be a thing of the past in Kashmir, according to local traders. 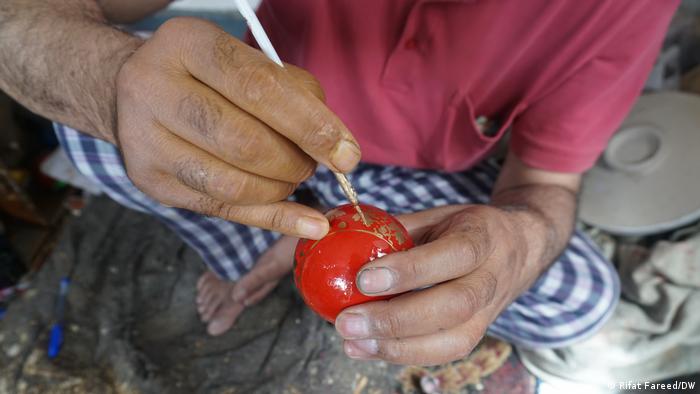 His family has been in the business of papier-mache art for well over a century, but, for Akhtar Hussain Mir, his trade is gradually disappearing before his eyes.

Mir learnt the art at the age of 10 but now, five decades later, he feels disheartened as the craft is slowly vanishing from the Himalayan Valley of India-administered Kashmir and little is being done to preserve it.

For artisans such as Mir, papier-mache is a time-consuming process and requires a lot of patience. It involves two crucial steps — Sakthsazi, which means making the actual item, and Naqashi, the painting and decoration of the product. Both tasks are painstaking processes that require careful deliberation.

Mir, who regularly creates papier-mache boxes that are used for wedding parties when giving candy to guests, learned the art from his uncle. He is the third generation papier-mache craftsman in his family.

But today his company, Akhtar Mir and Brothers, located in the congested Alamgari Bazar in the old part of Srinagar city, is struggling to survive and staring in the face of extinction.

A big blow to his trade arrived in the shape of a complete lockdown, declared on August 5, 2019, after the Indian government scrapped Kashmir's special status and imposed a blockade on movement and communication for several months. In 2020, when businessmen like Mir were hoping that they could revive their trade, another lockdown was imposed after the coronavirus pandemic brought life to a halt across the world. 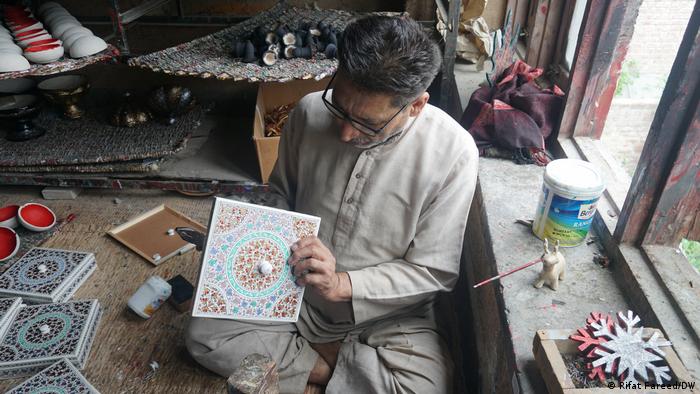 Nasir Mir, who co-owns the company, says: "We would have been completely shut due to these lockdowns as our staff strength decreased from more than 100 to just 15. It is now the local customers who are helping us to survive by ordering boxes and trays for their weddings," Nasir told DW.

"After COVID-19, businesses have collapsed," he said.

And the future doesn't look good.

"No new person is joining this work. We don't want anyone to join, we are not even encouraging our children to do this work because they can do better in other fields," Nasir said. "The art is in a coma already, it can be completely dead anytime."

Nasir said he had seen thousands of people leaving the papier-mache trade because they cannot survive in it.

"We are helpless. We are not having any help from the government. No initiatives are being taken for the survival of artisans," he said, adding that the handicraft sector was previously the backbone of Kashmir.

The Kashmir Chamber of Commerce and Industry (KCCI) — a local union of traders — said the region had suffered whopping losses of $7 billion (€6 billion) during the consecutive lockdowns. The KCCI said, in the handicrafts and tourism sectors alone, thousands of jobs had been lost.

The history of papier-mache in the region goes back to the 14th century, when a Muslim saint — Mir Syed Ali Hamdani, known as Shah-e-Hamdan — brought skilled artists to Kashmir from Persia. He was soon recognized as someone responsible for the spread of Islam in the region and is also credited for introducing different crafts to the locals — one of which was the art of papier-mache.

It takes years to even learn the basics of the craft. From turning paper into pulp, and making them into richly decorated, colorful artifacts like vases, bowls or cups, papier-mache creators can spend several years before they are able to craft more elaborate products such as elephants, wall hangings, jewelry boxes, ornaments or bangles. Through all this, the art depicts the culture and history of Kashmir.

The workshops of papier-mache are mostly located in the congested areas of old Srinagar. However, over the years, hundreds of these workshops have shut down as people switched to better-paid jobs. There are nearly 35,000 people engaged in the art in the city of Srinagar, which is home to almost 1.5 million people.

Mir said the job used to be well-paid. In fact, it used to be a "luxury," but times have changed. The salary is so low that he doesn't even want any of his three sons to get involved in the business.

Hundreds of hand-crafted elephants of different sizes are present in Mir's workshop. There are a large variety of ornaments and decorations too, like tree hangings, colorful stars, bells and trinkets, waiting to be exported for more than a year. Lockdown has put a stop to most of their export trade.

With little business, the salaries are continuing to fall, adding pressure and forcing many to give up the work they love. 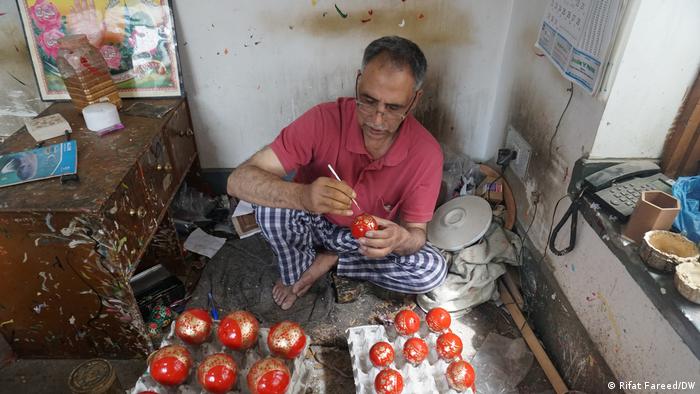 Too late to change

Barkat Ali, 50, steps into his Srinagar workshop at 8 a.m. after working for 12 hours straight, sitting in the same place, focusing on the product and intricately painting with the brush motifs on vases, boxes and other decorative items, all for the princely sum of less than 300 rupees (€3/$3.50) per day.

"I cannot run a family on this work. I have two children, and it consumes your eyesight. But I am compelled that, at this age, I cannot learn any new skill. That's why I am still doing this," Ali said.

Ali, who has been working for several decades in the trade, feels disheartened that, despite his hard work, the job does not paying well.

"My two sons dropped out of school and now work as salesmen in the shops to support the family. This work cannot help you to carry on the education of your children. It cannot even help one individual to survive," he said. "If we were dependent on this work at this time we would have to sleep on an empty stomach."

Ashiq Hussain, another skilled artist who has been in the trade for half a century, had to shut his company due to the losses and now works at Mir's workshop as a laborer. 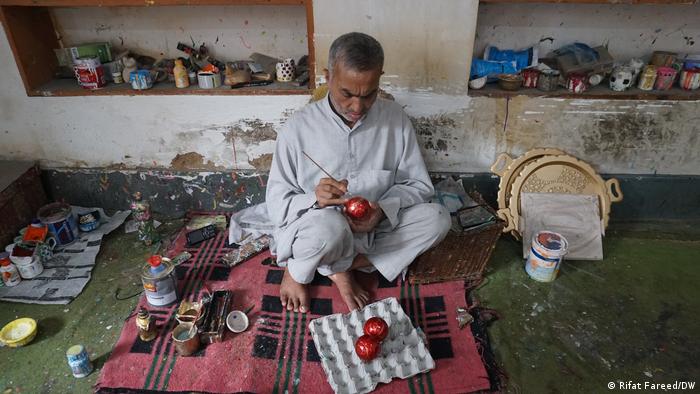 Another artist, Ghulam Muhmmad, 50, who learned the craft at the age of 13, said the art of papier-mache would soon be a thing of the past.

"This art will not survive anymore," Muhammad said. "The raw material is getting costly, but our labor charges are decreasing day by day," he added.

Before the onset of armed insurgency against Indian rule in Kashmir, the handicraft industry was considered a lucrative business. But when the insurgency broke out in the early 1990s, it hit all trade sectors in Kashmir, particularly as international tourism was badly hit.

The director of handicrafts in Kashmir, Mehmood Ahmad Shah, who works for the government in the tourism sector, recognizes the difficulties faced by artists, but said the issues were only temporary.

"We are taking several initiatives and want to hold exhibitions across the country if the COVID-19 situation allows," he told DW.

"We are also holding local exhibitions in the city to connect customers directly with artisans," he said. "We want to take the initiatives of e-commerce so that the artisans can sell their products across the globe," he said, adding that they are also rolling out many financial schemes. 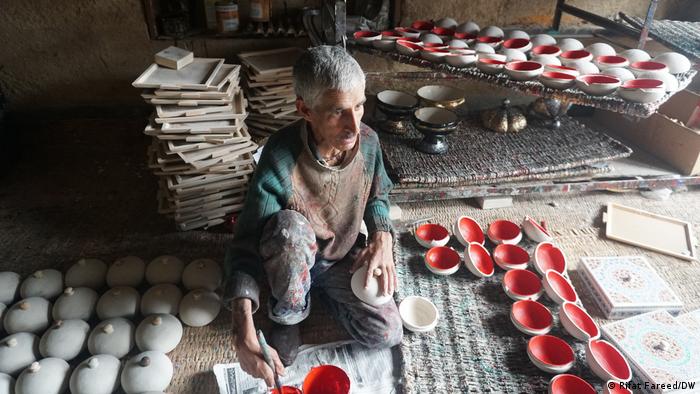 Why is India deploying female soldiers to Kashmir?

Female soldiers were sent to the restive region for the first time in May, but critics say the military still has a long way to go on gender equality.

Indian police have moved against the head of Twitter in India, Manish Maheshwari, over a map which showed Jammu and Kashmir and a Buddhist region as independent countries.

Thousands of Kashmiri youth are becoming addicted to heroin, amid extreme economic and psychological stress. Experts say recent lockdowns and the widespread availability of the drug are major contributing factors.