A kangaroo in central Adelaide filmed by Australian police is just the latest wild creature lured into cities subdued by the pandemic. In recent weeks, two cougars entered Chile's capital Santiago, before being captured.

The "suspect," posted South Australian police Monday, was "wearing a gray fur coat" and "hopping through the heart of the Adelaide Central Business District."

The kangaroo, police quipped, "was last seen on foot heading into the West Parklands," a prized greenbelt of the capital of South Australia state. 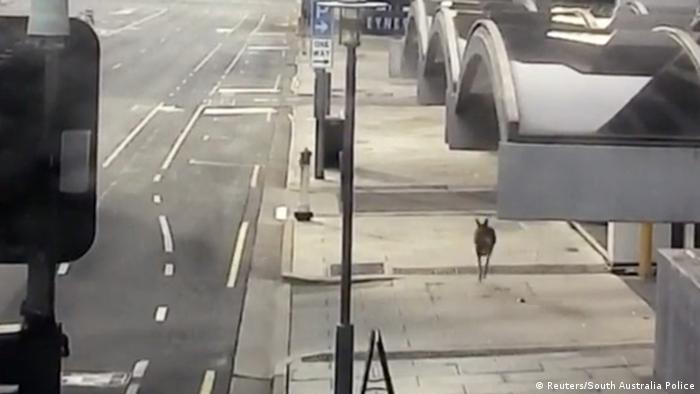 CCTV footage at one point showed the kangaroo and a lone car narrowly avoiding collision.

"We sometimes spot kangaroos in the suburbs but never in the [center of the] city," a police media officer said. "Normally it's bustling with cars."

Around the world, reports have accumulated in recent pandemic-shutdown weeks of wildlife entering urban and commercial areas.

Two normally reclusive cougars were captured in Chile's capital Santiago while under nighttime curfew in what livestock service director Marcelo Giagnoni described as a "unique" phenomena.

"There's no people, there's no noise, so they dare to explore a little more," said Giagnoni, referring to prolonged quarantine measures.

Both cougars, one weighing 35 kilograms, were taken to zoos for checks.

At Yosemite National Park in Northern California in recent weeks herds of deer, coyotes, and a bear have ambled where tourists typically gather with their cars.

"Nature is obviously welcoming the change," said Yosemite conservancy president Frank Dean. "The wildlife is getting a little bit bolder now because there are few people around."

Most notable were coyotes, Dean said: "They're not afraid. I mean, they're just sort of walking by people and walking around, among buildings."

Meanwhile, in the small Welsh town of Llandudno, mountain goats captured the internet's imagination as they roamed down from the hills into the deserted high street.

The South Australia state on Sunday also announced the death a 74-year-old Adelaide man who contracted the coronavirus during a recent South Pacific cruise on board the ship Ruby Princess.

More than a dozen former passengers of the vessel which docked in Sydney last month have since died. More than 500 persons, including crew, were infected.

Australia has recorded 57 coronavirus deaths during the pandemic.