A journalist has been killed in Derry/Londonderry during violent demonstrations in an Irish nationalist part of the city. Police are treating the murder as a "terrorist incident." 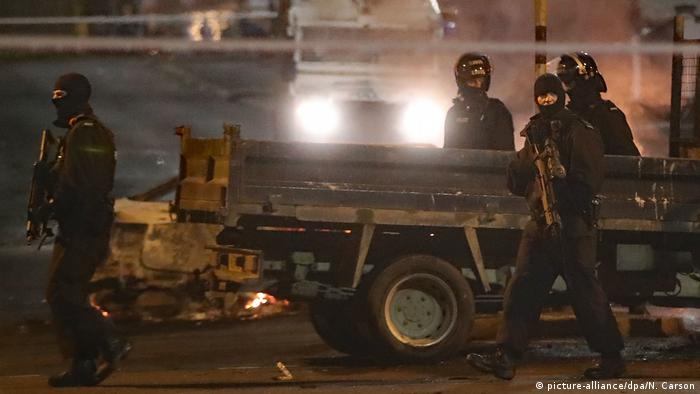 A 29-year-old woman who was shot dead during a demonstration on Thursday in Derry/Londonderry was a journalist, Northern Ireland police said early Friday.

Assistant Chief Constable Mark Hamilton said that police were treating it as an act of terrorism.

"We believe this to be a terrorist act, we believe it has been carried out by violent dissident republicans," Hamilton told reporters at a news conference.

Hamilton said a group called the New IRA was likely behind the murder of reporter Lyra McKee.

On Thursday, petrol bombs were thrown at police vehicles in Creggan, an Irish nationalist area of Londonderry, according to Britain's Press Association. The news agency distributed images of heavily armed police and burned-out vehicles near the scene.

The murder comes after a car bomb claimed by the New IRA was detonated outside a courthouse in Londonderry in January. Nobody was killed or injured in the attack, which led to the arrest of four male suspects.

Londonderry — known to republicans as Derry despite its name on the map — was once a flashpoint in fighting between Irish republicans, who want to unite Ireland, and Unionists, who want to keep Northern Ireland within the UK. The nationalist fight was spearheaded by the Irish Republican Army (IRA), which ended its armed campaign against Britain in the 1998 Good Friday peace accord. Small splinter paramilitary groups are still active.

Easter weekend is a key time of the year as republicans opposed to a British presence in Northern Ireland mark the anniversary of a 1916 uprising against British rule.

Leaders of the nationalist Sinn Fein, which once served as the IRA's political arm, and the pro-British Democratic Unionist Party (DUP), both condemned the killing.

The incident highlighted the threat of militant groups opposed to the 1998 peace deal that largely ended three decades of conflict in Northern Ireland. Concerns over a reinstated border between the EU member state of Ireland and the country of Northern Ireland, one of four countries that make up the UK, have also risen as London and Brussels set terms for Britain leaving the bloc.

A message from the US

US House of Representatives Speaker Nancy Pelosi led a congressional delegation to Londonderry earlier Thursday. The trip aimed to show support for the peace agreement, which politicians in Washington helped broker.

Pelosi told a special joint sitting of Ireland's parliament in Dublin on Thursday: "I've said it before and I'll say it again, we must ensure that nothing happens in the Brexit discussions that imperils the Good Friday accord, including, but not limited to, the seamless border between the Irish Republic and Northern Ireland."

"Let me be clear, if the Brexit deal undermines the Good Friday accord, there will be no chance of a US/UK trade agreement. As you face the challenges posed by Brexit, know that the United States Congress, Democrats and Republicans in the House and in the Senate, stand with you," Pelosi said.

"Soldier F" is to be charged over one of the most notorious cases from the Troubles: the killings of 13 unarmed Catholic demonstrators in Londonderry. There was insufficient evidence to charge a further 16 soldiers. (14.03.2019)

Trimble was instrumental in ending 30 years of violence that killed more than 3,500 people in Northern Ireland. British PM Boris Johnson and Irish Prime Minister Micheal Martin have led the tributes.