The singer is pulling her songs from streaming service Spotify over COVID disinformation it has helped spread. She said the lies it was airing were "costing people their lives." 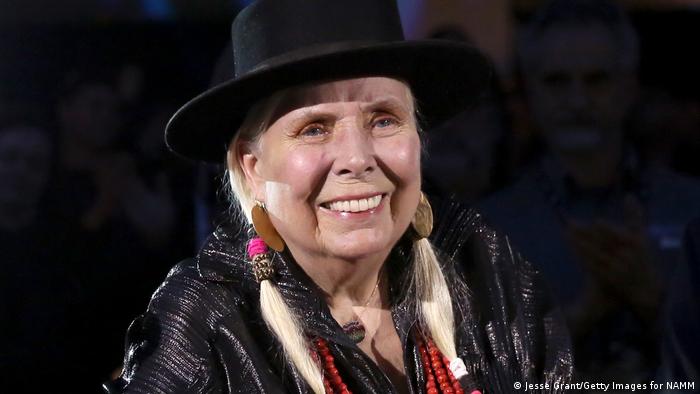 Canadian singer-songwriter Joni Mitchell on Friday said she was seeking to remove all her songs from Spotify, days after fellow songwriter Neil Young did so in protest at the streaming service's airing of a podcast containing false information about the coronavirus.

She is the first prominent musician to follow Young's call to join the action directed at "The Joe Rogan Experience" podcast, which critics have said is a platform for conspiracy theories and disinformation, particularly over COVID-19.

"Irresponsible people are spreading lies that are costing people their lives,'' Mitchell, 78, said Friday in a message posted on her website. "I stand in solidarity with Neil Young and the global scientific and medical communities on this issue.''

Although Mitchell has not recently come up with any hits, several of her songs, particularly "Big Yellow Taxi'' and "A Case of You,'' are still highly popular on Spotify.

What has the controversial podcast said?

On the podcast, which has a massive following on Spotify, Joe Rogan has discouraged young people from being vaccinated against COVID-19.

He has also advocated the use of the anti-parasitic drug ivermectin in treating the disease, despite the fact that leading global health authorities say it is not authorized or approved as a remedy.

Last month, the comedian interviewed an infectious disease specialist, Dr. Robert Malone, who has been banned from Twitter for promulgating misinformation about the coronavirus.

What has Spotify said?

Following Young's action this week, Spotify said it had policies in place to remove dis- and misinformation from its services. It claimed to have taken off more than 20,000 podcast episodes related to COVID-19 since the start of the pandemic.

But the service has said nothing about Rogan, one of its major attractions, who has a contract that could earn him more than $100 million ($89.7 million).

"We regret Neil's decision to remove his music from Spotify," the service said, "but hope to welcome him back soon."