Joint World Cup 2026 bid very much a US affair

The US, Mexico and Canada are to put together a joint bid to host the 2026 World Cup. However, although it is technically a joint bid, the plan the three football associations envisage is very much a US affair. 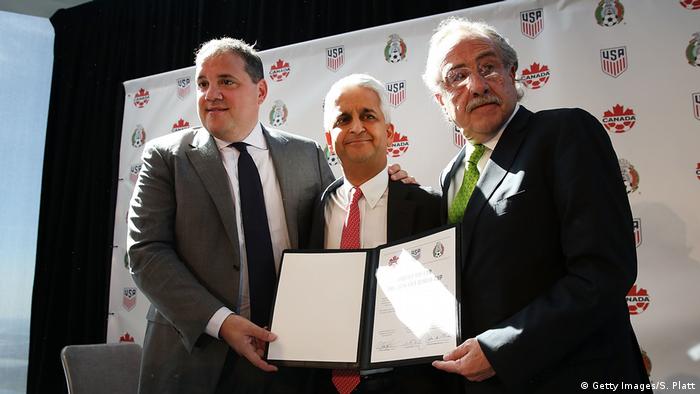 US Soccer Federation President Sunil Gulati announced the plans for the joint bid at a press conference in New York on Monday, where he was joined by his Mexican and Canadian counterparts.

"We announce our bid to bring the World Cup back to the United States, to Canada and Mexico in 2026," Gulati said. "We look forward to welcoming the world after what we hope is a successful bid."

The tone of his remarks alluded from the very start to the fact that the plan is to make the joint bid very much a US affair, as he referred to the nearby Statue of Liberty and the extraordinary diversity of "this country."  Just how American the proposed bid is to be, was make crystal clear when he announced that the plan is for the US country to stage 60 of the tournament's 80 matches with Canada and Mexico hosting 10 games each.  From the quarterfinals onwards, all matches would be held in the US, Gulati said.

He also acknowledged the fact that Mexico in particular, which has hosted two previous World Cups, in 1970 and 1986, would prefer to host more matches.

"I think it's safe to say both countries would have liked to host more. In the end, it was a discussion, a negotiation, but a very friendly one," he said.

Stronger than a US-only bid

And while some in Mexico and Canada may have wondered why their football associations had agreed to a bid that would see them host so few matches, some Americans wondered why they should bother bringing their two neighbors on board.

"We could host the tournament on our own," Gulati said... but (joining forces) makes our bid stronger."

It had long been rumored that the three countries were looking at a joint bid, but Gulati said it had taken some time to finalize the agreement.

By the time they reached the agreement, FIFA had decided that the 2026 World Cup would be made up of 48 instead of the current 32 teams, something that apparently led the Canadian Soccer Association (CSA) to drop the idea of going it alone. And given the outcome of the US election, Gulati saw the need to play down any suggestion that President Donald Trump's antagonistic relationship with Mexico could hamper the bid.

"The president of the US is fully supportive... We are not at all concerned at some of the concerns that some people may raise," Gulati said, stressing that Trump was "especially pleased" that Mexico was on board.

Following the press conference, Gulati, his Mexican counterpart, Decio de Maria, and CSA President Victor Montagliani, who is also a FIFA vice president and the president of the regional federation CONCACAF president, signed a memorandum of understanding on the bid.

The joint bid goes into the race for the 2026 World Cup as the clear favorite, particularly after the FIFA Council ruled last year that neither Europe nor Asia would be eligible to bid, as Russia is hosting the 2018 tournament, and Qatar is to do so in 2022. However, rival bids could still come from the regional federations in Africa, South America and Oceania. The decision on who will host the 2026 World Cup is to be made in vote by FIFA's 211 member associations.

Without knowing the details, which are still to be worked out, the bid appears to have a lot going for it. As Gulati pointed out, the three countries have more than enough existing stadiums to host a World Cup, meaning there is little risk of venues being left to rot after the tournament, as has happened following the 2010 and 2014 World Cups.

Not just that, but Mexico and the US, which hosted the 1994 World Cup, have a track record in staging what were then admittedly smaller events. Canada has done so with a number of FIFA tournaments, including the 2015 Women's World Cup.

And while Mexico has an established football culture, hosting the event should add momentum to the growth of the sport in the US and Canada, where Major League Soccer has posted increases in average attendance for the past three years. 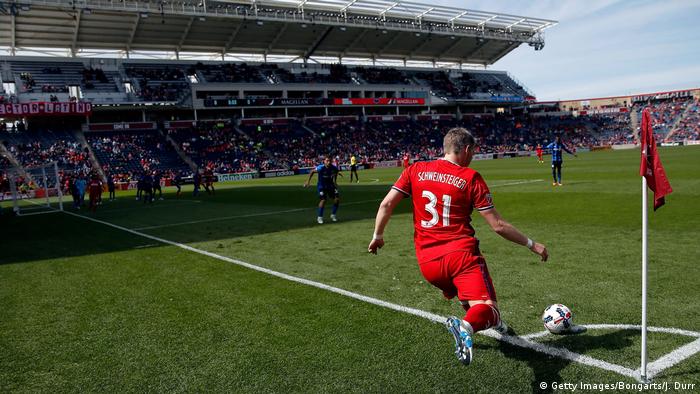 However, the joint bid already has its critics, particularly in Mexico.

"Together there will be a lot of problems - the long distances, the time zones, it will be worse than in Brazil," Ricardo Ferretti, coach of the Mexican champions Tigres told US-based sports broadcaster ESPN.

"Mexico is only getting the crumbs," read a headline in the Mexican sports paper "Record."

The reaction from Canada has been more understated. Asked for his reaction to the fact that Canada would only get 10 games, former national team goalkeeper Craig Forrest told sports broadcaster Sportsnet that he was "a little disappointed" and that it seemed to be a US bid with the other two countries included to bring it in line with FIFA's new concept of inclusion. At the same time though, Forrest described the possibility of Canada co-hosting a World Cup as an "exceptional opportunity."

Given the fact that Canada has only once qualified for the World Cup (in 1986), an overriding concern is whether or not all three host countries would qualify automatically. Forrest noted that while the hosts of all previous World Cups had qualified automatically this was still far from a done deal for 2026.