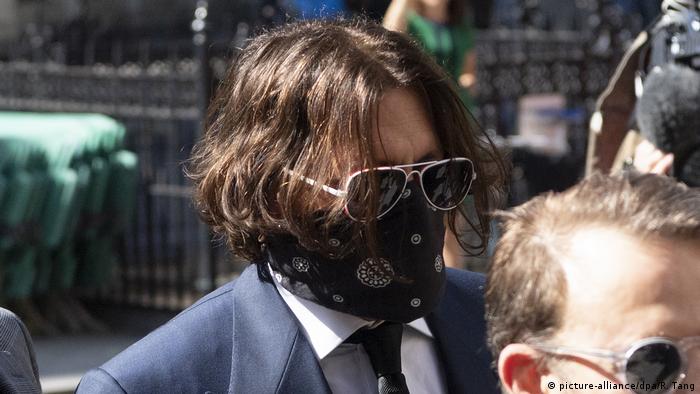 A British court opened a hearing Tuesday in a libel case filed by US film star Johnny Depp against the publisher of UK tabloid newspaper The Sun over an article that called him a "wife beater."

The article accused Depp of abusing his former wife Amber Heard, a claim which the actor strongly denies. The couple divorced in 2017 following a short and tempestuous relationship. Both accuse the other of abusive behavior.

Heard has accused Depp of 14 incidents of violence, including a drug-fueled "ordeal of

physical assaults'' while the couple was in Australia in 2015. Depp has denied all of the allegations.

"There is a substantial body of evidence … which clearly demonstrates that this was a lie manufactured by Ms. Heard and her friends," Depp's lawyer David Sherborne said in a written opening statement.

Depp and Heard were photographed arriving separately at the High Court in London Tuesday for the start of the hearing, which is expected to last three weeks. Both of them will give evidence during the trial.

Depp's former partners, actresses Vanessa Paradis and Winona Ryder, are also expected to provide evidence during the hearing, according to British media. Both have issued statements supporting Depp.

Print and online versions of the story were published in 2018 with the headline: "GonePotty: How can JK Rowling be 'genuinely happy' casting wife-beater Johnny Depp in the new Fantastic Beasts film?"

The Sun said the article refers to "overwhelming evidence" of domestic violence, referring to a previous US court action by Heard.

Lawyers for The Sun said in a written opening statement that the description of a wife beater was accurate and the testimony will prove it.

"They will show that the sting of the articles is correct — namely that the claimant beat hiswife Amber Heard causingher to suffer significant injury and on occasion leading to her fearing for her life," they said.

Depp's legal team also accuses Heard of having an affair with Tesla chief Elon Musk in 2015 and with actor James Franco.

France is the world's second biggest exporter of films after the US, and the industry is hugely important to the country. But the coronavirus has had a dramatic impact on the movie business. So what does the future hold? (06.07.2020)

A spaghetti western star whose 'Dirty Harry' films made him an anti-hero of the political right, the Oscar-winning actor and director later praised Donald Trump. But as he turns 90, his true legacy is as an auteur. (29.05.2020)