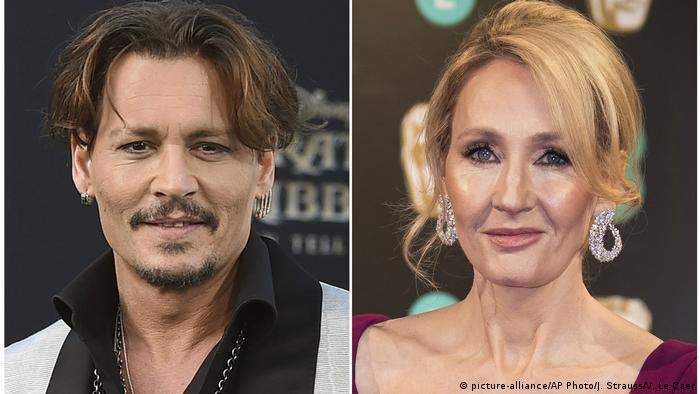 In a statement on her website, Rowling said, "'Harry Potter' fans had legitimate questions and concerns about our choice to continue with Johnny Depp in the role" and that she and director David Yates had even considered recasting the role.

"However, the agreements that have been put in place to protect the privacy of two people, both of whom have expressed a desire to get on with their lives, must be respected," wrote the "Harry Potter" author. "Based on our understanding of the circumstances, the filmmakers and I are not only comfortable sticking with our original casting but genuinely happy to have Johnny playing a major character in the movies."

Rowling added: "I accept that there will be those who are not satisfied with our choice of actor in the title role. However, conscience isn't governable by committee."

Depp is set to star as villain Gellert Grindelwald in the upcoming "Fantastic Beasts: The Crimes of Grindelwald," which is scheduled to be released at the end of 2018.

The film will be the second in a planned five-movie spinoff of the hugely successful "Harry Potter" franchise.

Depp made a brief cameo as Grindelwald in the first film, "Fantastic Beasts and Where to Find Them," but is set to star as one of the main characters in the sequel.

Depp separated from actress Amber Heard in May 2016, after she accused the "Pirates of the Caribbean" star of being "verbally and physically abusive."

Depp, however, has maintained that the allegations were "salacious false stories, gossip, misinformation and lies."

The divorced couple reached a private settlement in August 2016 and issued a joint-settlement saying their relationship was "intensely passionate and at times volatile but always bound by love," and that there was "never any intent of physical or emotional harm."

The film studio Warner Bros. said in a statement that, while recognizing "the magnitude of the issues raised," they stood by the decision to cast Depp.

At the beginning of 2017, Depp declared bankruptcy, with some media reports suggesting the actor had enjoyed a $2 million-a-month (€1.7 million) lifestyle.