A spaghetti western star whose 'Dirty Harry' films made him an anti-hero of the political right, the Oscar-winning actor and director later praised Donald Trump. But as he turns 90, his true legacy is as an auteur.

In 2016, when Clint Eastwood said he'd support Donald Trump over Hillary Clinton during the US presidential election, he also had a lot to say about the "political correctness era" that was "weakening society." Sick of the "kiss-ass generation," he pined for a time when "nothing was politically incorrect because everything was always a joke."

It was something his character Harry Callahan from the Dirty Harry franchise of the 1970s and 80s might have said in a swipe at the social liberalism of the era.

But lately there's been a shift. In February, Eastwood said he sympathized with the #MeToo movement, itself a vanguard of identity politics and political correctness. He stood by women and men who are "standing up against people who are trying to shake you down for sexual favors," he said in an interview with the Wall Street Journal. He also endorsed Democratic presidential candidate Mike Bloomberg and distanced himself from Donald Trump.

As a director, Eastwood's films have mostly transcended politics. The uncompromising auteur has emerged as a true artist, honored with best director Oscars for the arthouse western Unforgiven of 1993 and his stripped-back, heartfelt portrayal of a female boxer in Million Dollar Baby. He remains difficult to pigeonhole — and at 90 years of age, a formidable filmmaker who can't be ignored. Last year's Richard Jewell attracted controversy but also won plaudits and a place in the American Film Institute's top 10 films of the year. 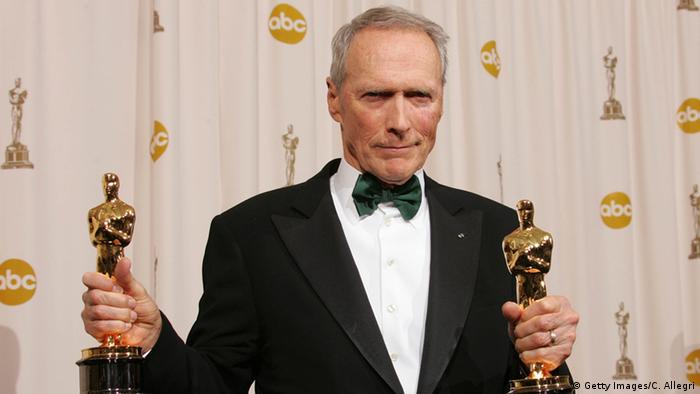 Holding his Oscars for 'Million Dollar Baby' in 2005

Rise of an anti-hero

Born on May 31, 1930 in San Francisco, Eastwood's career has straddled the contradictions and fissures of American political and cultural life.

After growing up in poverty and playing the piano for coins, Eastwood started acting in low-budget TV westerns and B-grade films. After a roll in the hit western TV show Rawhide (1959), his major breakthrough came playing the ruthless lead in a trilogy of spaghetti westerns with Italian director Sergio Leone.

Starting with A Fistful of Dollars, shot in Spain in 1964 and based on the Samurai epic Yojimbo by Akira Kurosawa, further turns as the outlaw with no name in For a Few Dollars More and The Good, the Bad and the Ugly made Eastwood a global star.

Read more: Hope for a film industry struggling to adapt to corona

He liked playing the anti-hero and moving beyond cliches of the white knight in shining armor. Taking this premise to the next level, he embodied the brutal, ice-cold cop in the Dirty Harry films of the 1970s and 80s. "Do I feel lucky?" Eastwood famously goaded one criminal about to be dealt deadly justice. "Well do you punk?"

But his character's passion for guns and vigilante justice was flavored with a misogyny and racism that he struggled to live down. No darling of the counterculture, he would later call it political correctness run amok.

Doing his own thing

Eastwood might have retained the image of the gun-toting patriot willing to take the law into his own hands, yet after his psychothriller directing debut from 1971, Play Misty for Me, he began to direct affecting melodramas like The Bridges of Madison County of 1995. One reviewer wrote: "Bridges is an admirable achievement, one that probably does more to reposition its maker as someone who can carry a movie without carrying a gun." Eastwood's politics were hardly mainstream however; his liberal costar Meryl Streep would later call him out for his apparent support of Trump. 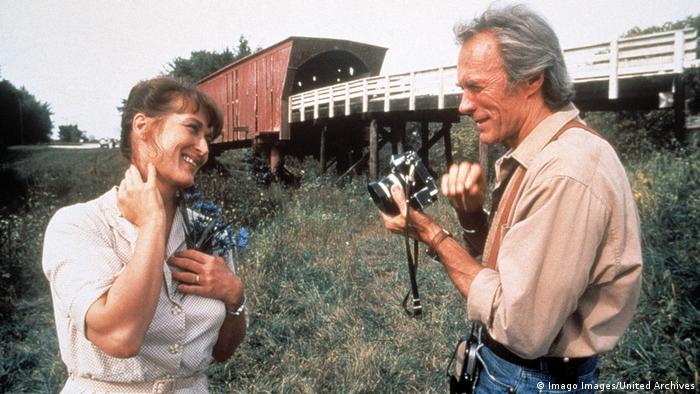 Meryl Streep and Clint Eastwood in 'The Bridges of Madison County'

To date, Eastwood has directed near 40 feature films. From the Charlie Parker biopic Bird to finely wrought dramas and mysteries like Mystic River, Changeling and Gran Torino, many of Eastwood's best works date from the new millennium, after he'd passed the age of 70.

Despite his embrace of the politically incorrect politics of Donald Trump in 2016, his shift back to the center in the current election cycle implies that Eastwood remains a free-thinker who does things on his own terms.

"I like the libertarian view, which is to leave everyone alone," he once said. "Even as a kid, I was annoyed by people who wanted to tell everyone how to live."

Oliver Stone's 1991 movie about the Kennedy assassination was a masterpiece of the genre. While many of these films come from Hollywood, there’s also a history of conspiracy films in Germany. (19.05.2020)

At 86, Clint Eastwood may be politically unpopular, but has offered a based-on-a-true-story film with hit potential. In "Sully," Tom Hanks plays the pilot that bravely landed a passenger plane in the Hudson River. (08.09.2016)

Before actor and filmmaker Clint Eastwood became a world star, his career began sluggishly. His breakthrough came in Europe — in a spaghetti Western. (31.05.2015)

Golden Palms, an Oscar, Golden Globes, European and German film awards: Few directors have been honored for their work as widely as Michael Haneke.

In nearly 75 years, the Oscar for best international film has only gone to an African production three times and a Bollywood production has never won. Europe dominates the category. Why?