Wearing a "LOVE" emblazoned jacket, the US first lady stole the limelight from her husband, President Joe Biden, ahead of the G7 summit. But was she trolling the former FLOTUS? 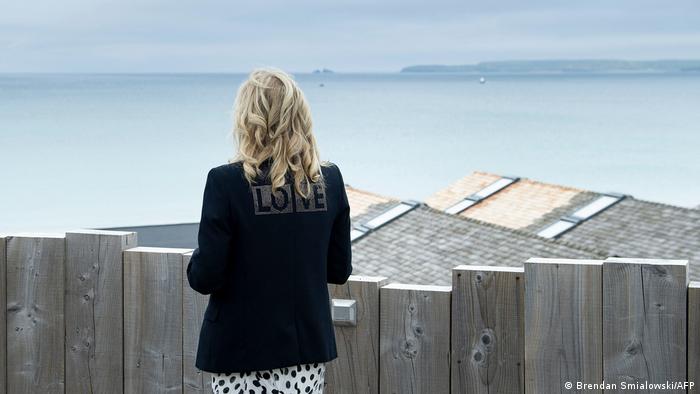 First lady fashion once revolved around illustrious designers like Christian Siriano — who dressed Michelle Obama in 2016 for the Democratic convention — or the latest cut of a Hillary Clinton pantsuit.

But in recent years the FLOTUS has been donning slogan couture in an apparent bid to make a statement.

On Thursday, Jill Biden wore a black blazer with the word "LOVE" studded in rhinestones on the back that sent the internet into a spin. Alongside President Joe Biden, Jill Biden was meeting with British Prime Minister Boris Johnson and his wife, Carrie Johnson, in Cornwall in the lead-up to the G7 summit.

"Well, I think that we're bringing love from America," Jill Biden told a journalist when asked about the slogan. "I think that this is a global conference and we're trying to bring unity across the globe and I think that's important right now that you have a sense of unity."

But social media was more interested in comparisons with the infamous "I really don't care, do u?" jacket worn by former first lady Melania Trump on a visit to migrant detention camps on the US-Mexico border in Texas in 2018.

At a time when the Trump administration had been separating children from migrant families, Melania Trump's slogan appeared to many to be in bad taste.

She had been visiting a facility housing 2,300 migrant children separated from their families by the US government on the day that President Donald Trump said he would reverse the policy.

But the outrage was palpable. Twitter users used hashtags including #IReallyDoCare and #WeShouldAllCare in protest of the statement by the FLOTUS.

In the wake of that lingering controversy, one progressive political group called the slogan jacket-wearing FLOTUS Jill Biden a "massive upgrade."

Jill Biden herself tweeted an image of herself barefooted on a Cornwall beach in her "LOVE" blazer alongside Carrie Johnson and her young child.

The first lady has been seen in the same jacket before, including at the launch of Joe Biden's presidential campaign in 2019, lending credence to the narrative that the latest FLOTUS is a woman of the people who is unafraid to wear the same thing twice —  indeed, a similar Zadig & Voltaire blazer can be found selling online for around $149 (€123).

By contrast, the media had liked to point out Melania Trump's high fashion faux pas, including when she strutted out in six-inch stiletto heels in devastated Texas to view relief efforts in the wake of Hurricane Harvey in 2017.