A Belgian playwright has created a sensation with a play about disillusioned youth becoming foreign fighters in Syria. Ismael Saidi mixes serious messages with mockery of what he considers misinterpretations of Islam. 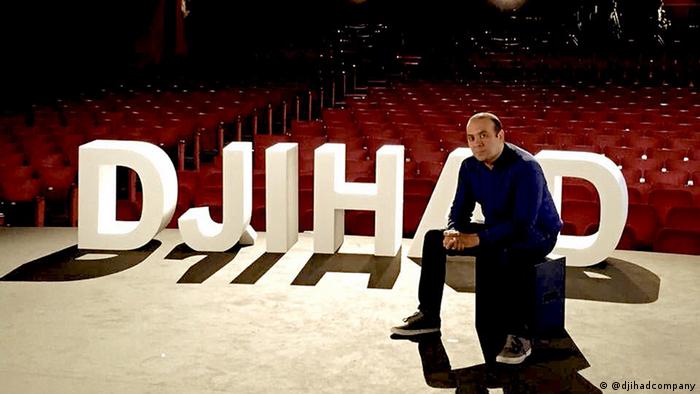 Ismael Saidi's play was scheduled for a five-day run in December 2014. That was a few days before the attacks on the satirical magazine Charlie Hebdo and the discovery of an Islamist terror cell in Verviers, Belgium. The crisis of Belgian youth sneaking off to fight with the "Islamic State" in Syria was in full swing and with it, the concept of "jihad" carried increasingly sinister implications.

In the midst of this tension, Saidi decided there must be a funny side to the phenomenon, even if he had to create it himself. The playwright wrote up three hapless characters to be sucked in to supporting Islamist militants, confronting head-on what he considers the stereotypes and mistakes of Muslim society, basing the plot on his and his friends' life stories.

Defiantly, Saidi called his comedy "Djihad" (the French spelling). "In my vision as an artist it was important to say we can use any word," he explained, without concern as to whether that word is "sacred" to one religion or another. "People were scared at the beginning because they said 'what is that - 'Djihad'?" Saidi recalls with a laugh. "And when I told the press it was a comedy, it was worse! 'What? A comedy? Are you crazy, man?' "

The production's public relations manager Lucile Poulain says she had a tough job back then. "[T]he journalists didn't want to hear from us," she chuckles. "They didn't want to even write the name 'Djihad' in their cultural agendas." Poulain says she received many phone calls and emails in accusatory tones. "'Seriously, you named your play 'Djihad' - in this period of harsh times, with radicalization?" she recounts. "'Are you crazy to do that?' They thought we were a threat, actually."

That is, until people started actually seeing the show. Once they became acquainted with the clueless but sweet Reda, the Elvis-loving Ben and the earnest Ismael himself, crowds loved them.

The three young Belgian friends sit on a park bench in Brussels and decide their lives are so lackluster and directionless that they might as well become foreign fighters in Syria, as Belgians have in fact done in record numbers per capita. But their innocence and camaraderie, laced with constant jokes, make people forget they're headed off to supposedly become ruthless killers. They are just young men who haven't gotten a good start in life, who deserve a second chance.

Sitting in the Syrian desert, they recount their lost loves: For Reda, it's the non-Muslim girl, Valerie, his mom forbade him to marry; for Ben, it's Elvis, whom he's devastated to learn has a "Jewish" middle name: "Aaron." Ismael wanted to be an artist but was told the Koran doomed artists to hell. They confront and decide to reject these dogmatic religious restraints, with a loose plan to go back to Brussels and follow their reinvigorated dreams.

The "secret", Saidi says, is that "Djihad" is Muslims making fun of Muslims first. "I'm laughing about me," he explains, "and then I'm laughing about society." It's a formula some authorities believe can be so potent for addressing both radicalization and isolation that the Belgian Education Ministry latched onto "Djihad" just three weeks after its five-show run and subsidized its performances for schools, calling it a "public service." Now there have been more than 100 showings with more to come; tens of thousands of people have seen it. It's being translated into Dutch and this troupe will take it to Paris this spring.

Message for all communities

Saidi's two co-stars Reda Chebchoubi and Ben Hamidou are friends of his, and Saidi took the play's plot from experiences they all had growing up on the sometimes harsh streets of Brussels. By age 14, Saidi had already been recruited to go fight in Afghanistan, something he says would have been applauded in his local mosque. While he withstood the pressure, many of his friends did not and got on planes to Afghanistan, their fates still unknown to him.

The worst part of that, Saidi says, is that "society, the government, knew it and let them go because they saw it as a fight against the Russians" in Cold War days. But he says the same thing happened this time when young people started going to fight with forces opposing Syrian President Bashar Assad. "At the beginning [authorities] knew it and they let them go to Syria too. Everybody knows it," he says with agitation in his voice, alleging politicians only started paying real attention now that the radicalized youth are "coming back to kill here."

Though he may express it in slang and jokes, Saidi's message is deadly serious: Now Muslims and other communities must come together to save their kids, and ultimately themselves, from the terror threat. That's why the playwright has gone to such great lengths to humanize his "jihadists," to show how three normal guys can head down the wrong path simply because they don't see alternatives.

Without spoiling the ending, things go south quickly in Syria and audiences find themselves going from laughter to tears, usually surprising themselves. But by then, Saidi says, the magic has worked. "You feel something," he explained, "and if you have the ability to feel something about those guys, maybe everything's not over."

The message embraces all communities. Saidi has invited Badibanga Ndeka, a Belgian rapper, to accompany the troupe at some performances with #link:https://www.youtube.com/watch?v=ZPBgroI92gg:his song "Na Lingi Yo,"# which means "I love you" in Lingala, a Congolese language. "Badi" sings about his biracial family, warning extremists of all stripes that these integrated citizens "are the dream of Dr Martin Luther King Jr and the nightmare of Bart [de Wever, the Antwerp mayor and a Flemish separatist] and Marine [Le Pen, president of the anti-immigrant nationalist French party]."

Le Pen's disdain for radicalized European youth was one of the reasons Saidi says he was compelled to write "Djihad." He felt disaffected young Belgians needed to see they weren't alone and other Belgians needed to better understand their situation.

It worked with students from the College Notre Dame de Bon Secours in Binche, Belgium, who saw the play earlier this month. Amandine Falcicchio, age 17, said she already knew "there's an integration problem in Belgium," but this helped her relate to young people who actually experienced it. Her classmate Emma Innocente said she had gone into the play unsure how there could be a comedy about something so dark as "jihad" but she emerged calling it a "really good idea." "We don't have the opportunity to talk much about this problem," she said, except when it's a crisis and in the press. "Now we can talk about it through laughing and through jokes."

Teacher Caroline Wallez added that she's not sure "Djihad" will help Belgian authorities keep youth from traveling to Syria but she hopes at least "our students will be thinking."

Mothers of foreign fighters have attended and thanked him for portraying their children as humans, “not as monsters”, Saidi says. Chebchoubi's mother even came up on stage in tears and apologized for having forced her son to abandon a great love, which she only understood completely after seeing the play.

As with any handling of sensitive religious views, Saidi and his show have their detractors. He doesn't like to talk about threats he and the group have received for their portrayal of Islam, but at the public debates they hold after each performance, audiences almost invariably raise comparisons with the satirical magazine Charlie Hebdo, whose journalists were killed in Paris just over a year ago by Islamist extremists.

"Of course we are afraid," publicist Poulain acknowledges, but she says Charlie Hebdo stood for freedom of speech "and we have to fight like they did."