The billionaire businessman was in Germany to be honored by publisher Axel Springer for business innovation and social responsibility. But Amazon's European workers argue that the company's practices are the opposite. 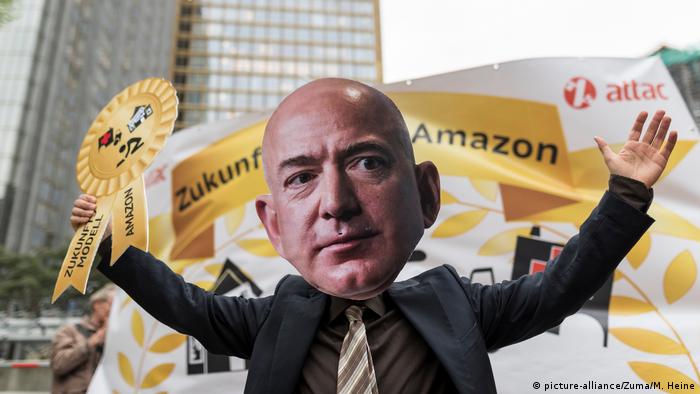 Bezos refuted criticism of his company's wage and labor practices, which have led to past strikes and also caused prominent German politicians to weigh in. 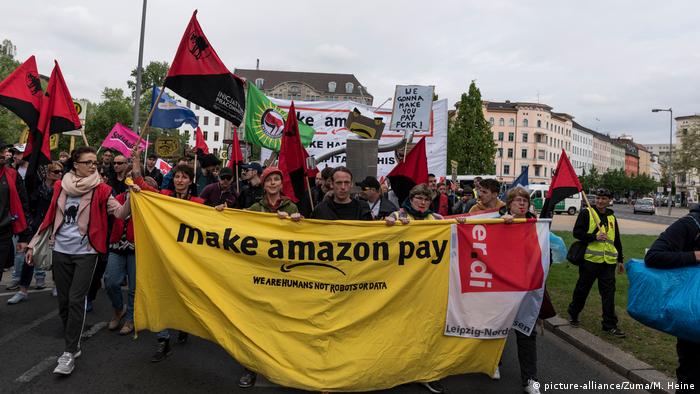 Verdi union boss Frank Bsirske described Axel Springer's decision to award its 2018 prize to Bezos as a "mockery and a shame" and accused the Amazon head of seeking to "Americanize" labor conditions in Germany. "We don't want to go back to the 19th century."

Other European workers' unions expressed solidarity with the protests in Berlin.

The newly elected chairwoman of the Social Democrats (SPD), Andrea Nahles, whose party is in a coalition government with Angela Merkel, said Bezos "didn't deserve any prize" and criticized Amazon's conditions for workers.

When asked about workers' criticism of Amazon during the prize ceremony, Bezos described it as unjustified and said that the company provides good conditions and wages for its German workers.

Amazon under fire: Tuesday's protests in Berlin demonstrated that the consistent criticism the online behemoth has faced over the past year shows no sign of abating. Additionally, the statement from SPD chairwoman Nahles, which dpa reported was greeted by boos, also shows how the party is trying to refresh its image as the political defender of German workers.

Past action: Amazon workers across Europe have walked off the job in protest, with employees in Spain conducting their first-ever strike in March. Both the EU and US President Donald Trump have criticized the company's tax policies.

Read more: Opinion: Andrea Nahles must now prove she can reinvent the SPD

The ceremony in Berlin

Bezos is the third-ever recipient of the Axel Springer Award. The publishing house says the nonmonetary prize is awarded to an "extraordinary person, who is uniquely innovative, creates and changes markets, and influences culture and simultaneously assumes social responsibility."

In a press release, Axel Springer, which publishes Germany's daily Bild, praised Bezos for Amazon's "visionary" digital business practices, as well as his consistent digitalization strategy for the US newspaper The Washington Post, which Bezos bought in 2013. In his acceptance remarks, Bezos said he believes his legacy will be based on investment in space exploration. The Amazon CEO described Blue Origin, the space exploration company he funds, as "the most important thing I'm doing."

Bezos is currently the richest man in the world, according to Forbes business magazine. The company, which Bezos founded in 1994, reported a profit of slightly more than $3 billion (€2.45 billion) last year.