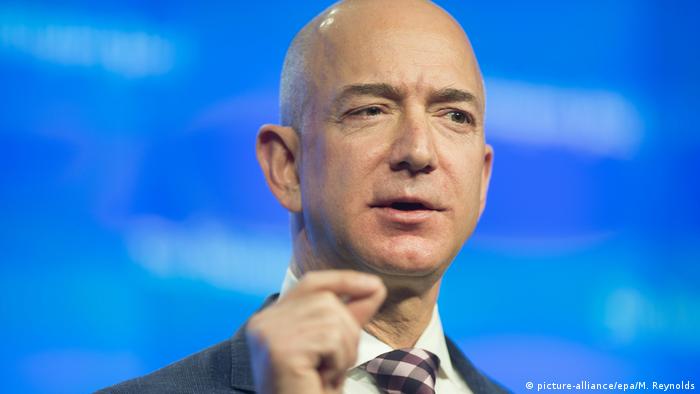 Read more: What if billionaires could live forever?

Bezos' boost: The magazine said the 59 percent rise in the price of Amazon stocks caused the company's CEO to shoot up to the number 1 spot. The publication of the rich list led to another rise in stock price on Tuesday, boosting Bezos' worth to $127 billion in a matter of hours. Bezos also owns the US daily The Washington Post and the rocket manufacturer Blue Origin.

Frenchman richest in Europe: Bernard Arnault was able to enter the top ten after achieving a solid 11th place in the 2017 list. The magazine said the euro's increased strength against the dollar in the previous year helped Arnault snatch fourth spot.

Poor Trump: The US president, who has regularly touted his intelligence and business acumen, saw an estimated $400 million shaved off his wealth in the past year. Trump is now estimated to be worth $3.1 billion.

Chinese gains: The top 20 included two new entries from China: Alibaba founder Jack Ma and the richest person in Asia, Ma Huateng, who is CEO of the Chinese internet company Tencent. China, which is ruled by the Communist Party of China, has the second highest number of billionaires in the world (373) after the United States (585).

In and out: Of the 259 new billionaires to enter the list, some were among the world's first cryptocurrency billionaires. 121 people who had been on last year's list had the misfortune of becoming "mere" millionaires.

Pretty successful year: Overall, the billionaire class did an admirable job since Forbes' 2017 list. There are now a record 2,208 billionaires worldwide and their combined worth is $9.1 trillion. That is an 18 percent increase in combined wealth compared to 2017. The group was also able to increase their average fortune to a new record: $4.1 billion.