Worker's at Amazon's main hubs in Germany and Italy have launched walkouts to hit the US e-commerce giant at a time when it hurts most — Black Friday and Cyber Monday — the busiest online shopping days of the year. 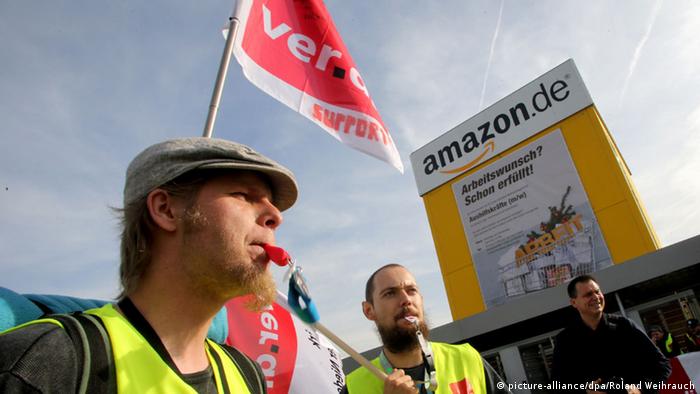 German services' sector union Verdi said on Friday that Amazon employees were striking at six distribution centers in the country as part of a long-running dispute over pay and conditions.

Amazon has already launched big promotions for the "Black Friday Week" — a US tradition that has been embraced by Germans in recent years because online retailers like Amazon are offering large discounts on clothing, electronics and toys.

Verdi said the US-style shopping bonanza unveiled the contradictory policy of Amazon as it was offering huge discounts, while refusing to pay their employees fair wages.

"The world's biggest online retailer wants to achieve record sales on this day, but employees have to produce record performance not only on this day so that everything runs how Amazon wants it," said Verdi board member Stefanie Nutzenberger.

Verdi has organized frequent strikes at Amazon since May 2013 to press demands for the retailer to raise pay for warehouse workers in accordance with collective bargaining agreements in Germany's mail order and retail industries. But the company has repeatedly rejected the union's demands, saying it believes warehouse staff should be paid in line with competitors in the logistics sector, not as retail staff.

Germany is Amazon's second-biggest market after the United States, with 11,000 warehouse staff plus thousands of seasonal workers. Unions have also complained about poor working conditions.

"Constant checks, heavy workloads and physically stressful activities lead to an extreme strain on the workforce, which is especially evident at this time of the year," Nutzenberger added.

The company said in a statement it was "focused on maintaining delivery times for Black Friday and the following days," adding that it was committed to fostering a climate of "positive co-operation" with its workers and creating an "inclusive environment" in the workplace.

First strike at Amazon in Italy

Workers at Amazon's main distribution hub in Italy are also planning to walk out on Friday — their first ever strike. Labor unions CGIL, CISL and UIL said in a joint statement that more than 500 Amazon staff at the Piacenza site in northern Italy had agreed to industrial action after efforts to negotiate bonuses with the company had failed.

Workers have also decided not to do any overtime until December 31, covering the peak season for the online retailer which hires temporary workers during this period.

Amazon employs around 4,000 workers at Piacenza during the pre-Christmas season, of which about 1,600 are permanent staff while the rest are on temporary contracts. They earn about €1,300 ($1,539) per month on average.

Gianluca Zilocchi, the secretary of CGIL in Piacenza, said employees wanted a bonus because Amazon was "having great results, and the profits need to be distributed."

"There's also a question of rights and a suffocating climate for workers. It [Amazon] squeezes people, it makes very heavy demands [on workers]," Zilocchi added.

The company said salaries paid to its workers were among the highest in the logistic sector and that it also provided some benefits such as private medical insurance or money to pay for training programs.

Amazon delivery drivers now let themselves into your home

Amazon Key delivery is being tested in 37 US cities, allowing drivers to enter customers' homes to drop off parcels. But the new service was quickly mocked on social media amid security concerns. (08.11.2017)