Jean-Claude Juncker: A European helmsman hands over the tiller | Europe | News and current affairs from around the continent | DW | 01.12.2019

Jean-Claude Juncker: A European helmsman hands over the tiller 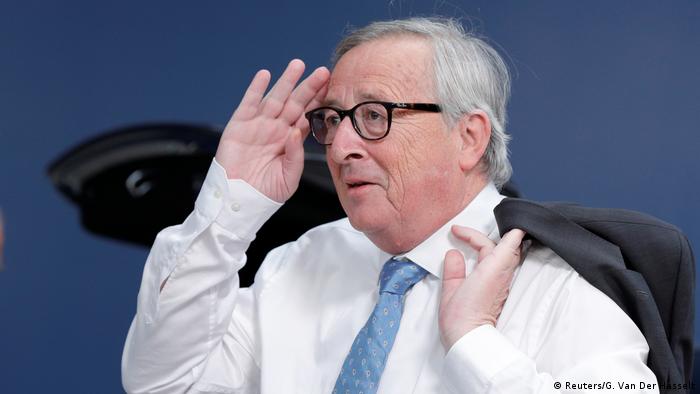 "I'm leaving office — not sad, but not bursting with happiness either — with the feeling that I have given it my all," said Jean-Claude Juncker in his final address to the European Parliament.

For more than 20 years, Juncker was at the forefront of European politics. First as finance minister and prime minister of his home country Luxembourg, then as chairman of states in favor of the euro and, finally, as head of the EU's political administration. Now, at 65, Juncker plans to retire from public life. He says he looks forward to writing a book and reading more poems by the German writer Rainer Maria Rilke.

The challenge of migration

In his five years as European Commission president, Juncker was tasked with navigating a number of complex challenges: Greece had to be saved from bankruptcy and the eurozone stabilized and the effects of the global financial crisis and growing unemployment had to be combated. The influx of migration along the Balkan route and across the Mediterranean also weighed heavy on the EU. Juncker, along with a number of willing EU member states, was able to strike a deal with Turkey and Libya to significantly drive down migration numbers. Despite that effort, however, the issue was not entirely resolved by the end of his term in office. Juncker never tired of championing solidarity among member states, as well as with many of the African countries from which migrants arrived.

But this solidarity should not just be out of charity: "Charity is a traditional reflex of Europeans, but what is needed today is to establish a genuinely equal partnership between Africa and Europe. Investing in Africa, creating jobs in Africa, that should be the mantra for our action, not viewing Africa solely in terms of the refugee crisis. To view our relations with Africa only in terms of refugees is disrespectful to Africans. But let us do what has to be done on the ground to avoid unfortunate people taking to the seas," said the outgoing Commission president in summarizing his tenure before the European Parliament. 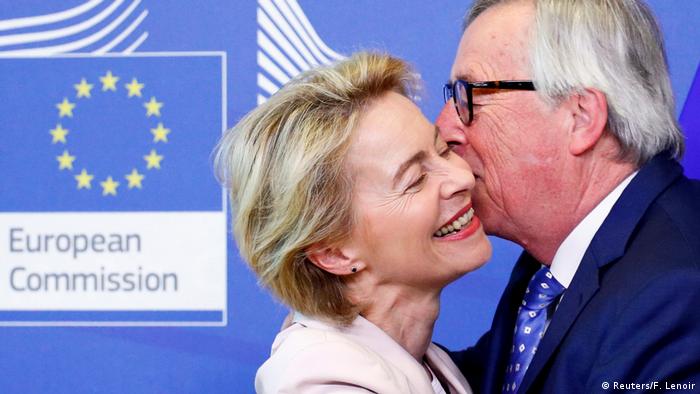 Juncker gave a kiss but no advice to his successor — at least, in public

His kisses were feared

Juncker embraced friends and political foes alike and was not sparing with his blandishments. His kisses and hugs for presidents, chancellors and potentates became the stuff of legend in Brussels. And his unique sense of humor caused confusion at times. He would ruffle the hair of ministers before meetings, he gave others fat kisses on the forehead and he often laughed while greeting Hungarian Prime Minister Victor Orban with the words, "Hello, dictator."

Juncker and Orban, who belong to the same Christian Democratic political family, were often at loggerheads with one another. The Commission president was convinced that Orban was hollowing out Hungary's democratic foundations. Ultimately, Juncker was forced to admit, "I have given up on Orban." 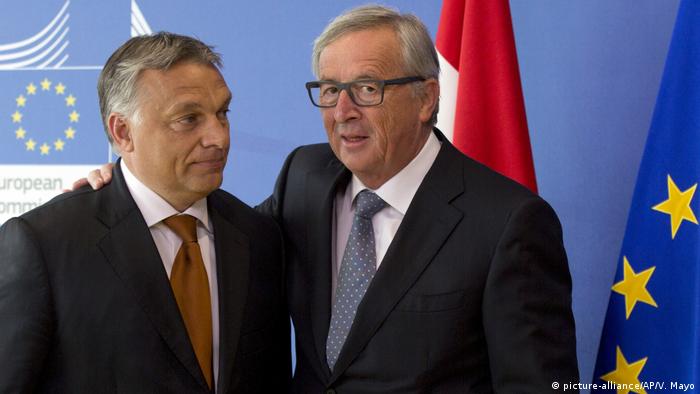 For Juncker, Orban's grip on power in Hungary is simply an expression of a larger crisis that has worsened during his tenure at the helm of the Commission: the rise of nationalist and right-wing populist movements in many EU member states. The Luxembourger was adamant about the fact that Europe must be protected from such "stupid, narrow-minded nationalism."

Juncker, the son of a steelworker who was forced into the service of the Nazis during the Second World War, always saw the European project as one of establishing peace: "Our greatest success and finest achievement remains the fact that we have been able to preserve peace in Europe. It sounds so self-evident — but it is not."

Yet others, like Marco Zanni, who leads right-wing populists in the body, say Juncker was the wrong man for the job. Zanni, a member of Italy's far-right League party, says Juncker leaves behind a fractured EU, and that he provided no antidote for citizens' fears about migration, security and economic growth.

Juncker's willingness to embrace also had its limits, however. "I never kissed Nigel Farage," said Juncker after a debate on Brexit, the UK's departure from the EU. Farage sees himself as the leader of the Brexit movement in the European Parliament and has often leveled harsh verbal attacks against Juncker. When Farage returned to the body after the 2016 Brexit referendum, Juncker barked, "What are you still doing here?"

When the two men put their heads together, a photo of the incident made it appear as if Juncker was about to kiss the Briton on the cheek. "I just whispered an insult into his ear," Juncker later said.

Juncker sees Brexit, which has since been delayed until January 2020, as his single biggest political failure. Today, he says he should have been far more active ahead of the referendum, adding that it was "a big mistake" to follow the advice of then UK Prime Minister David Cameron, who told him not to get involved.

Read more: Brexit was a 'waste of time and energy,' says Juncker 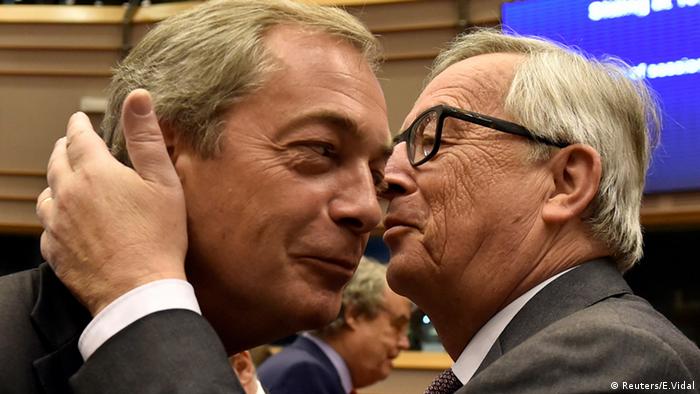 A kiss — or a whispered insult?

In his first State of the European Union address, faced with an EU paralyzed by the Greek debt crisis, Juncker labeled his team the "last-chance Commission." Did he use that chance? He certainly had a good touch when it came to economics. His €300 billion ($332 billion) investment package was a success, and many jobs were created.

However, he made little progress in pushing for the far-reaching EU reforms championed by the likes of French President Emmanuel Macron. He undertook a number of cosmetic changes, but structural problems remain.

Juncker's proposal to combine the EU Commission presidency and that of the European Council were greeted with pained smiles from the powerful heads of state and government in the Council. The outgoing Commission was also checked in its attempt to begin accession negotiations with Albania and North Macedonia. "There will be no accessions during my tenure," he promised — or, depending how you look at it, threatened — when he took the helm in 2014. He kept his word on that front.

Of course, Juncker wished his replacement, Ursula von der Leyen, all the best. "But I am not giving any advice, especially in public," he said with a grin at his last EU summit, the 148th of his career.