Japan′s ′hidden darkness′: The detention of unwanted immigrants | Asia| An in-depth look at news from across the continent | DW | 25.11.2019

Denied asylum, undesired immigrants in Japan are being placed in prolonged detention, with some resorting to hunger strikes. That's not about to change even after a recent death, reports Martin Fritz from Tokyo. 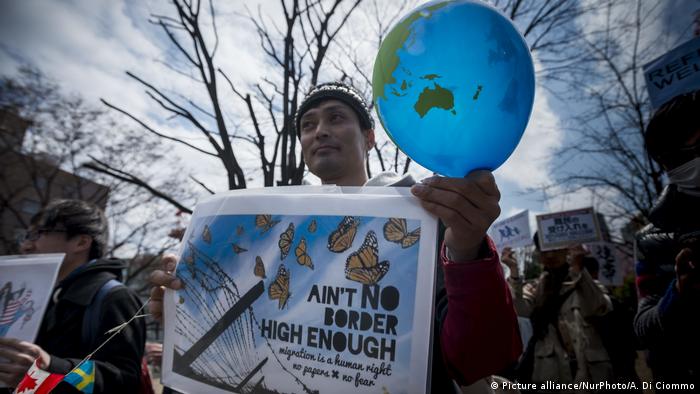 "We are human beings and want our human rights protected!" On November 2, Behzad Abdollahi, armed with a megaphone, stood in front of Tokyo's Shinjuku station with a group of supporters and demanded more rights. The Iranian had spent three years and 10 months at Ushiku deportation center, about 80 kilometers (50 miles) northeast of the capital.

The authorities had released him temporarily after he ended a hunger strike. But five days after his megaphone protest and after just two weeks of freedom, Abdollahi was detained again and had to return to his cell. "My body and soul are battered; I don't want to eat and I can't sleep," he said.

Abdollahi's fate is typical of Japan's iron-fisted treatment of foreigners who have lost their right of residence. Many of them are refugees whose asylum applications have been rejected. If they refuse to be deported, the Ministry of Justice tries to break their resistance by placing them in prolonged detention.

Currently, more than half of the 1,100 prisoners in the 17 deportation centers have been behind bars for longer than six months. Quite a few have resorted to a hunger strike. Since November 6, 10 long-term inmates at the Osaka center, for example, have refused food. At the end of September, 198 people were on hunger strike. According to the Ministry of Justice, Iranians were the largest group. 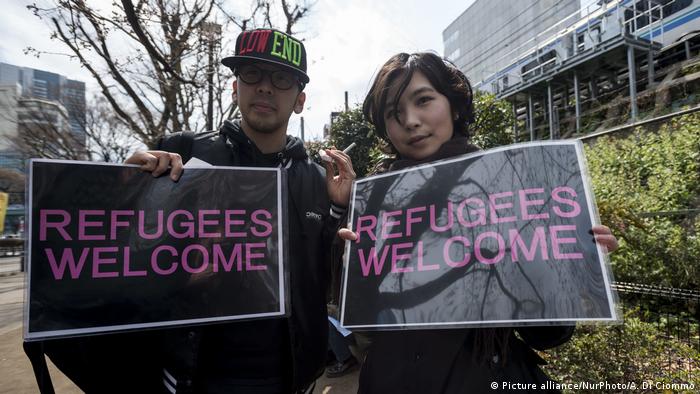 Japan's low intake of refugees has been criticized by protesters

Release as a bargaining chip

Japan's immigration authorities have reacted to this development with cynical tactics, promising the prisoners that they will be released if they quit their strike and start to eat again. This offer is made to inmates who have been starving themselves for more than 10 days and have lost more than 10 kilograms (22 pounds) in weight,  says the Ushikunokai aid organization. But any hopes they have of staying free for long are quickly dashed. Many of them have to go back to detention after two weeks. Others have to report regularly to the police but live in constant fear of being arbitrarily put in custody again. They are not allowed to work.

"Putting pressure on people who are in detention pending deportation and coercing them to break off their hunger strike is a form of torture," said Takeshi Ohashi, a lawyer who represents several of those detained. In the interview with DW, the Tokyo Bar Association called for a discussion on human rights. At a press conference on October 31, chamber member Teruo Tojo demanded that remand pending deportation be limited. Up to now, the authorities have not needed to give reasons for either detentions or releases. "Detaining foreigners without documents for years is not reasonable; it violates personal rights," Kanae Doi of Human Rights Watch Japan told DW.

In an editorial, the liberal Mainichi newspaper asked whether the Japanese government was even aware of human rights. The paper had previously described the conditions in the deportation centers as "hidden darkness." In the same article, it said some 15 foreigners had died while being transported or after being detained by Japanese immigration authorities. This sits badly with Japan's praise of itself as an open-minded country ahead of the 2020 Olympic Games in Tokyo.

The Ministry of Justice's new strategy against hunger strikers comes after a Nigerian starved himself to death at the end of June after 3 1/2 years' imprisonment at the Omura deportation center. Apparently, the man was not force-fed due to a lack of medical personnel. The authorities nonetheless claimed in early October that their staff had acted correctly.

"We are obliged to deport," the head of the immigration office, Shoko Sasaki, told foreign journalists. "We don't want the people who are in such detention in our country." Later, her office disseminated the claim that 43% of the people who refused to be deported had committed crimes.

This suggests that their release would endanger public safety, said the lawyer Masako Suzuki. But in fact, Japanese criminal law does not provide for the preventive detention of potential offenders, she said.

Meanwhile, Japan is looking for new ways to enforce deportations. In July, the government succeeded in persuading Turkey to take back even Turkish citizens who had no passport. In return, Turkey is allowed to participate in the new visa program for foreign workers. Japan has offered Iran the same deal. One-third of the prisoners in remand pending deportation in Japan are Iranians. So far, however, the government in Tehran has insisted that its citizens have the right to refuse deportation.