Japan's prime minister, the US ambassador, and thousands of visitors have marked the 70th anniversary of the bloody World War II battle. Okinawa still houses a huge US military base, stirring anger among the islanders. 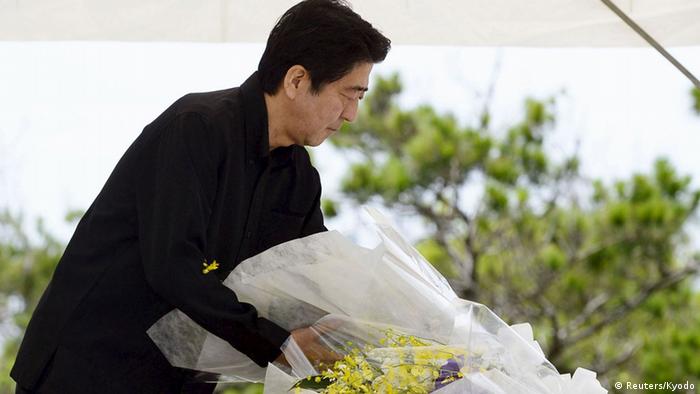 Resentful locals heckled Japan's Prime Minister Shinzo Abe at the Tuesday ceremony in Okinawa, expressing their protest against the large number of American troops still present on the island.

Shouts of "Go home!" could be heard while Abe was starting his speech, marking seven decades since the end of the battle, which claimed some 200,000 lives.

Visibly rattled, Abe told the 5,000-strong crowd that Japan had for decades enjoyed the dividend of peace after the horrors of World War II.

"People in Okinawa have long been asked to carry a big burden for our security," he said. "We will continue to do our best to reduce (it)."

The islanders have long complained about noise, accidents and occasional crimes associated with the base. Tens of thousands of American soldiers are stationed on Okinawa. Tempers have also flared over US plans to build a new base, sparking massive protests led by the island's governor, Takeshi Onaga, last month.

On Tuesday, Onaga's speech denouncing the "heavy burden" of US bases was warmly welcomed by the crowd.

Almost 20 percent of the main island of Okinawa is devoted to US military facilities.

American ambassador Caroline Kennedy attended the anniversary ceremony, which was held in Itoman. The site is near the spot where terrified locals had jumped from cliffs or were pushed to their deaths to prevent their surrender to US soldiers in June 1945.

Thousands of visitors, many of them survivors of the war, filed past black marble monuments paying their respects to the victims.

Among them was 87-year old Yoshiko Shimabukuro, who was mobilized as a battlefield nurse for the Imperial Army in March 1945. On Tuesday, Shimabukuro said she felt remorse for surviving the war when so many of her friends died.

"Especially in June, all sorts of memories come flooding back," she told AFP. "Memories, fear, sorrow, terror - even after 70 years. I can't put into words the sadness and terror that comes flooding back.

"You accepted you could die at any time. I don't know how I survived, looking back."

Naeko Teruya, a representative for the relatives of Okinawa victims, said that remains and unexploded bombs are still found underground and at construction sites.

"Seventy years since the war has ended, we still feel that the war hasn't truly ended," she said. "We continue to find the scars of war in Okinawa today."

Japan's island of Okinawa looks set to get a new governor, Takeshi Onaga, who sides with residents opposed to US military bases. This is in sharp contrast with the closer security ties sought by Japan, US and Australia. (16.11.2014)

A powerful typhoon has made landfall in Japan, bringing heavy winds as it made its way towards Tokyo. Several people are already dead or missing as the storm hit the south of the country. (06.10.2014)