Japan recalls baby formula and reports new Daiichi radiation | Asia| An in-depth look at news from across the continent | DW | 07.12.2011

Japan's dilapidated Daiichi nuclear power plant is posing new challenges. Baby formula has had to be recalled and a new leakage of radioactive material is reported to have been released into the sea. 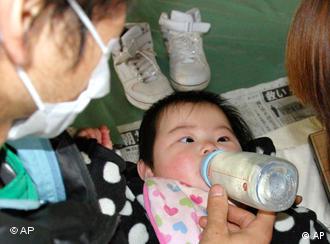 The levels of cesium contamination are far below allowed government levels, and are thus not harmful to infant health, according to a Meiji spokesperson. Kazuhiko Tsurumi, a Health Ministry official in charge of food safety, also said the radiation was no problem, "because the levels are within the government limit." 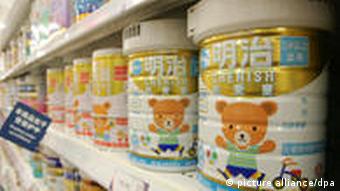 The contamination is below government limits

Meanwhile, the Japanese government has dispatched just under 1,000 troops to help in cleanup efforts around the dilapidated Daiichi Nuclear Power Station in the Fukushima prefecture, which was rocked by a massive earthquake and tsunami at the beginning of March this year.

Japan has since been fighting to contain its ensuing nuclear crisis and a number of food products have been called off the shelves because of contamination.

Japanese media has reported that around 150 liters of water contaminated with strontium and other nuclear substances have recently leaked into the ocean near the Daiichi plant.

Tens of thousands of protesters who want to abolish all nuclear plants in Japan rallied in central Tokyo Monday, just over six months after the nation's worst nuclear crisis since the war. (19.09.2011)

Fukushima's evacuees won't be going home for some time yet

Six months after the earthquake and tsunami triggered a nuclear crisis in Fukushima, as protests break out in Tokyo, some 87,000 evacuated inhabitants still don't know when or if they will be able to go home. (20.09.2011)

Despite government reassurances, many Japanese consumers are worried their food might be contaminated by radiation. The farmers in the region around the crippled nuclear plant in Fukushima say their products are fine. (18.08.2011)