Japan harvesting junk electronics to tackle resource shortages | Asia | An in-depth look at news from across the continent | DW | 14.09.2022 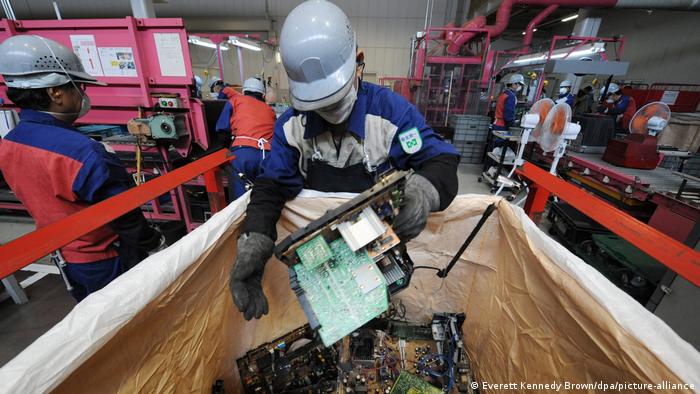 Japan has announced ambitious plans to utilize tons of disused electronic equipment that are discarded every year, as disruptions in international trade threaten shortages of raw materials critical to the country's high-tech production sector.

The Environment Ministry announced in late August that it is aiming to double the amount of metals recovered from electronic devices by 2030 and for the resources to be recycled and reused in everything from state-of-the-art electric vehicles to computers and smartphones.

According to the ministry, an impressive 210,000 metric-tons (231,485-ton) of metal was recovered in 2020 by specialist companies that operate as "urban miners."

A gold mine waiting in the trash

So much is discarded every year that a 2020 estimate suggested that there could be as much as 6,800 tons of discarded gold alone in Japan, which is more than the known deposits still waiting to be mined in South Africa.

"A decade ago, discarded electronics was not seen as being very valuable or a resource that that needed to be exploited, simply because the price of the metals that they contained was relatively low," said Kohmei Harada, director of the Sustainability Design Institute and a former director at Japan's National Institute for Materials Science.

"But that has changed dramatically and there is a growing recognition that more must be done to recover and reuse the materials that are already here," he told DW.

Many other countries are doing the same, Harada said, but the need in Japan is probably more acute because of the voracious appetite of the nation's advanced electronics companies combined with their almost complete reliance on imports from overseas.

And he argues that Japan is among the best-prepared economies in the world to take advantage of the resources that are already effectively at hand.

"Japan first began efforts to create a circular economy for electronic components as far back as the 1990s," he said, with manufacturers encouraged to recycle household appliances for the plastic, rubber, glass and other materials that they contained.

Gradually, greater importance has been placed on recovering the small amounts of metals that they also contain but were previously considered uneconomic to recover.

"Also, Japan has a very advanced waste management system and it has become cheaper to recover these metals now, far cheaper than in other countries," Harada said.

Powering the future with recycled batteries

Hiromi Murakami, a professor of political science at the Tokyo campus of Temple University, said recycling resources is critical for weaning Japan off imports that are susceptible to disruptions that are beyond the government's control.

"Japan is famously short of virtually all the resources that a modern economy requires and for years the two primary areas of concern have been energy and food," she told DW.

A decade ago, a dispute between Tokyo and Beijing over the sovereignty of a small archipelago of islands in the East China Sea led China to effectively ban exports to Japan of rare earth metals needed for electric vehicles.

The experience shocked Tokyo and has led successive governments to seek supplies from a wider variety of sources and from partners that are less likely to use them as political leverage.

"There is a critical national security aspect in play here," Murakami emphasized. "In the last few years, we have seen the impact of a global pandemic, the effect that has had on supply chains and the damage that has caused to industries that rely on timely and regular arrivals of components or raw materials from abroad," she added.

"That has been made worse by the war in Ukraine and the pressure that Russia has been able to exert on countries that rely on it for energy resources," she said.

"Japan has realized that it is vulnerable in many areas, not just fuel and food, so 'urban mining' and making the most of what is already here is a sensible tactic."

An Olympic effort to reuse metals

The Tokyo 2020 Olympic Games also provided a platform for Japan's drive to reuse resources. For the first time in Olympic history, it was announced that every one of the 5,000 gold, silver and bronze medals awarded during the Games would be forged from recycled metals.

The organizing committee appealed to the entire country to dig out the old computers, mobile phones and other devices that they had simply forgotten about when they purchased upgraded versions and donate them to the campaign. The public could therefore "participate" more directly in the Games.

Communities across Japan took part in the drive, including more than 1,300 schools and 2,400 retail outlets. Ultimately, 80,000 tons of waste was collected. After it had been smelted down to recover the most valuable metals, the haul yielded 30 kilograms (66 pounds) of gold, 4,100 kilograms of silver and 2,700 kilograms of bronze.

The invisible waste behind our laptops and smartphones   21.12.2020

We tend to focus on household garbage as a measure of our ecological footprints. But what about the waste and pollution that is generated to make the stuff we buy?

Toxic and radioactive: The damage from mining rare elements 13.04.2021