Jann-Fiete Arp: The Hamburg talent who feels move abroad would be 'nonsense'

Hamburg have started the new Bundesliga season better than many would have predicted, but the club may have even more excitement ahead. One of the club's best prospects wants to play for them - not a Premier League team. 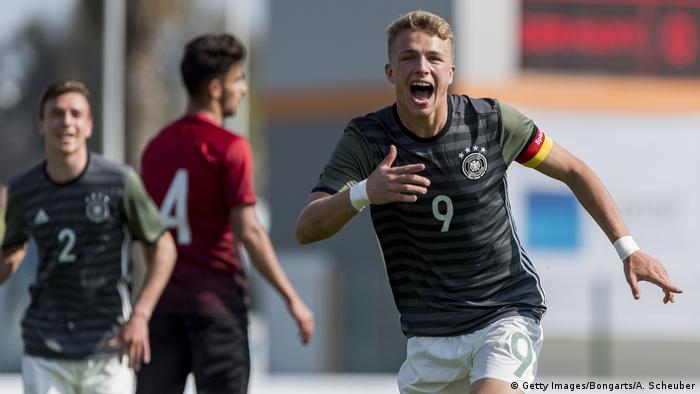 Seventeen year old Jann-Fiete Arp is one of the most exciting talents to come out of Hamburg's academy in recent years and this week he was awarded the U17 Gold Fritz Walter Medal (a series of annual awards given to talented young players in Germany).

"The kid has something. No, actually he has everything. I think he can pave HSV's way to the top," said the sporting director of the German football association (DFB) and Hamburg legend Horst Hrubesch, who presented Arp with his prize. Previous U17 Gold winners include Timo Werner, Leon Goretzka and Mario Götze.

The player who started as a central defender in his first few years at HSV because of his height (1.84 meters - 6 feet), wants to take the next step at the Bundesliga club not elsewhere.

"It doesn't make sense to join Chelsea as a 17-year-old," Arp said in an interview with the mass-circulation daily Bild after the Premier League club reportedly made an offer for the youngster this summer. "You have achieved next to nothing, basically have no experience in pro football. The risk is too high. It would have been nonsense to move abroad."

Hamburg have made sure the talent will be staying for a while, having signed Arp to a new deal  that runs until 2019. "It has been a great year for me, but I know I have to continue working - there's no doubt that HSV is where I want to do so," he told the club's website.

Arp has been a member of HSV's youth team since 2010 and last season he rose to prominence after finishing with an impressive scoring record. Twenty-six goals in 21 games for the U17s - a tally that included two hat tricks and two four-goal games, as well as braces in four after being called up for the U19s, drew both internal and external attention.

A strong domestic season at youth level was followed by an impressive showing at the U17 Euros last summer, where Arp scored the fastest ever hat trick (13 minutes vs. Bosnia and Herzegovina) in the competition's history. He has been chosen to captain the side at the U17 World Cup in India in October.

According to Bild, Arp's wages are set to rise to €5,000 ($6,033) a month but the youngster affirmed that "money must not play a role at my age" and appears keen to just keep on improving.

"He can score a goal out of nothing. That's not something many can do," said Hrubesch said.

The 17-year-old's role model is Tottenham Hotspur and England striker Harry Kane. "He plays the way I want to play," he said in a UEFA interview.

Arp's strong finishing, unique movement and strength shielding the ball have impressed, but HSV head coach Markus Gisdol is keen to play down the hype surrounding the player.

"Why should I play the lad if I don't think he's ready yet? He is 17 years old, fresh out of the U17s and can still play two more years in the U19s," Gisdol told  the Hamburger Morgenpost newspaper. "That shouldn't be forgotten and he should be left alone so that he can develop into a solid player."

Arp appears to be doing just that. In an interview with the DFB's website in April of last year, he said he wanted to improve his weak left foot and his heading. "None of my skills have reached their potential."

Despite having been a part of the club's preseason and a regular in first-team training, a ligament injury has slowed the youngster's progress for the moment. Arp has only played 80 minutes for HSV's U19s this season, but he does have one goal to his name.

While Markus Gisdol is keen to give the youngster time to develop, first-team football this season doesn't sound impossible.

"I also think Fiete has the quality to play in the Bundesliga - if he continues to work hard for it," Gisdol added in his interview with the Hamburger Morgenpost.

Hamburg legend Uwe Seeler - arguably the greatest-ever HSV academy product - believes Arp will soon break into the first team. Arp, though, is keeping his feet on the ground and not forgetting about the other things in his life.

"Football is a day-to-day business and it can be over any day," Arp told Bild. "But nobody can take away your high-school diploma."

While it might take a while for Arp to finish his studies and get healthy again, it doesn't feel like the Bundesliga is too far away from welcoming a new teenage sensation.