Pope Francis has appealed for an end to conflict in his New Year's address at St. Peter's Square at the Vatican. The Roman Catholic Church dedicates January 1 to the promotion of world peace. 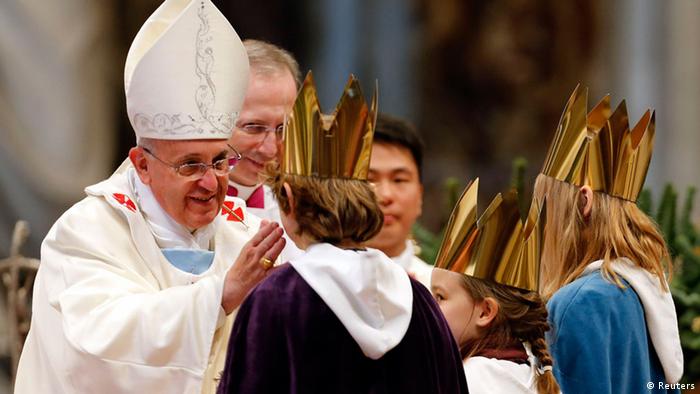 Pope Francis set aside his prepared text for a moment on Wednesday, issuing an appeal for an end to conflict around the world.

Speaking to several thousand onlookers from a studio window overlooking St. Peter's Square, he called on the world to listen to the "cry for peace" from suffering people.

"We are all children of one heavenly father, we belong to the same human family and we share a common destiny," the 78-year-old pontiff said in his first New Year's address since taking over from German-born Pope Benedict XVI. Francis said he hoped the "gospel of brotherhood speaks to every conscience and knocks down the walls that impede enemies from recognizing that they are brothers."

The Argentine pontiff formerly known as Jorge Mario Bergoglio took his papal name from St. Francis of Assisi, the saint most associated with peace.

The late 1960s, the Roman Catholic Church has dedicated every January 1 to promoting world peace. Unlike his predecessors, Francis has not set up home in the spacious apartment behind the window from which he delivers his weekly "general audiences."

The new pope was named Time magazine's person of the year for 2013, along with several other awards, for the impact he's made since taking up the position. His repeated appeals to narrow the gap between rich and poor, the establishment of a committee to combat child abuse, and calls for major changes in the Vatican's own hierarchy have been broadly interpreted as a different direction compared to his predecessors Benedict XVI and John Paul II.

Francis is expected to appoint his first batch of cardinals early this year, new entrants in the exclusive group that will ultimately appoint his successor. Results from committees appointed to suggest reforms to both the central Vatican administration and the Vatican bank are also penciled in for the coming 12 months.