Members of Italy's fractured Democratic Party hope their new leader, Nicola Zingaretti, will be able to turn around the opposition group's dismal performance in the polls and take on the ruling populist coalition. 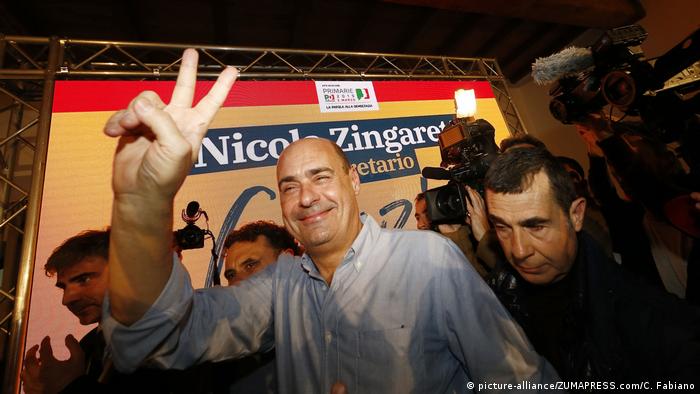 Nicola Zingaretti was elected as head of Italy's center-left Democrats (PD) in a primary vote on Sunday.

The 53-year-old moderate will be tasked with revitalizing a party that has been plagued by infighting and diving popularity since last year's election defeat to a coalition led by the far-right League.

Zingaretti, the governor of the central Lazio region that encompasses Rome, won 65-70 percent of the vote, with more than 1.5 million ballots cast, according to an initial tally released late Sunday.

Zingaretti tweeted his thanks to his supporters, saying it was "now time to turn the page."

The PD, Italy's largest opposition party, was in government for five years before losing power in the March 2018 national election. The defeat triggered the resignation as party leader of former prime minister Matteo Renzi.

The party is currently polling at 18.2 percent, according to Italian pollster YouTrend. By comparison, the governing right-wing League party is on 35.9 per cent, while its coalition partner, the anti-establishment 5-Star Movement, is on 21.2 per cent.

The ruling coalition has struggled with internal divisions over policy and flagging economic growth — factors the Democrats will be hoping to capitalize on as they attempt to woo voters ahead of European parliamentary elections in May. In another negative development for the government, tens of thousands of people attended a massive rally in Milan on Saturday to denounce the anti-migrant policies of the League.

Zingaretti, who has governed Lazio since 2013, is a former member of the Italian Communist Party and was a founding member of the PD in 2007.

His Jewish mother and grandmother escaped the Nazis in 1943, while his great-grandmother died at Auschwitz. His older brother Luca is famous in Italy for playing the title role in the popular television detective series Inspector Montalbano.

Giuseppe Conte is a 53-year-old jurist who has never been elected to parliament. Populist leaders Salvini and Di Maio will be joint deputy prime ministers. (01.06.2018)

Italy's trade unions called for the demonstration against economic stagnation and social injustice. Italy has one of the highest unemployment rates in Europe despite being home to some of its most productive regions. (09.02.2019)

Pressed on his party's migrant policies and support of Russia, Italian MEP Marco Zanni, of the far-right League party, abruptly stopped an interview with DW's Conflict Zone and walked off the set. (13.02.2019)

Tanzania votes in election marred by fraud accusations 17m ago