Nearly half of Italy's population wants to leave the EU, the country's economy is among the worst in the eurozone. Can the government solve this? Sandro Gozi, European Affairs Minister, is on Conflict Zone this week.

Referring to Germany's vice-chancellor Sigmar Gabriel, who said that the EU would go "down the drain" unless more EU states were kept from following Britain's lead, Gozi acknowledged the Union was in a "delicate phase" and could not afford to maintain "the status quo".

But a poll in May of this year showed that 48 percent of the Italian public would like to leave the EU, especially members of the Eurosceptic Five Star Movement. Minister Gozi told Tim Sebastian: "I love too much my country to let my country go towards suicide." And referring to Brexit he said: "I fully respect the British choice, I think that it is a deeply wrong choice."

But many Italians have grown frustrated over the EU's failure to look after the refugees and migrants arriving on Italian shores and turning down the country's requests for financial assistance.

Blame it on Brexit?

In June of this year, Renzi asked the EU to suspend state aid rules and allow Rome to lead a recapitalization of Italy's weakest banks. Angela Merkel turned down the request saying: "We wrote the rules for the credit system. We cannot change them every two years." The Italian Prime Minister Matteo Renzi said the uncertainty prior to Britain's EU Referendum was one reason why Italy's economy is struggling to pick up. 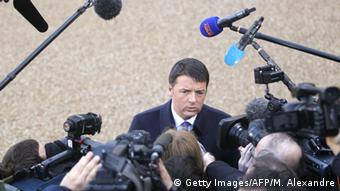 Ítaly's Prime Minister Gozi announced he will step down should his party lose the referendum.

Italy is the eurozone's third largest economy and yet it currently has half the average rate of growth in the eurozone. The administration's last forecast from April 2016 envisaged a growth-rate of 1.2 percent. But now economists expect it to be around 0.8 percent, and even weaker in 2017.

The International Monetary Fund (IMF) has given Italy the worst forecast of any eurozone country and said it won't return to pre-2008 levels at least for another ten years.

Confronted with these numbers, Sandro Gozi put the blame on the EU and previous Italian governments: "The country has never done serious reform for the last 15 years. A country which has suffered more than others because (of) wrong European therapy. […] We are doing the reform effort which nobody has done before." He also promised more reforms if his party wins an upcoming referendum on amending to the Italian constitution.

To be held in November 2016, the referendum will allow Italians to vote on restricting the powers of the regional governments by reducing the influence of the upper house of parliament. Renzi’s government hopes that this will make it easier to pass legislation. Critics of the referendum say it is a political gamble and could easily be hijacked by anti-European voters. Renzi has suggested he could step down if the result goes against him.

After Brexit, his chances have gotten slimmer. 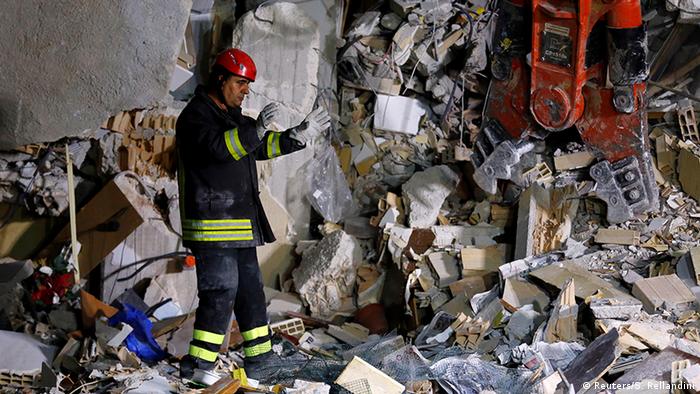 The earthquakes in Amatric have killed almost 300 people.

At the same time, the government's reaction to the earthquakes in central Italy in August 2016 that killed almost 300 people has also come under fire. Rome has been repeatedly criticized for not having done enough to prevent a disaster like this one by allowing illegal construction and corruption in reconstruction projects.

"Experts estimate that some 70 percent of Italy’s buildings are not built to anti-seismic standards, with codes routinely not applied to older buildings when they are refurbished, and not respected at all when new ones are built," Jon Henley wrote in the Guardian.

But it's not just about being unprepared. Italy suffers the highest rate of perception of corruption in the EU. Brussels released €494 million from its Solidarity Fund after the earthquake in L'Aquila which caused 300 deaths and damaged 30.000 buildings. According to an EU report, there was serious mismanagement of those funds.

"Here, in the middle of a seismic zone, nothing has ever been done," said Dario Nanni of the Italian architects’ council. "It does not cost much more, when renovating a building, to make it comply with earthquake standards. But less than 20 percent do."

Soren Bo Sondergaard, a European Parliament rapporteur, said that there is reason to believe that part of the money spent on building new housing for the quake's victims was paid to companies with "direct or indirect ties" to organized crime.

Tim Sebastian pointed out to Mr. Gozi that if Italy were serious about fighting corruption, the government would "rush new legislation through parliament and enforce it". Gozi said: "I don’t think that the problem in Italy is laws, we've probably got too many laws. The issue is to enforce them." He also said: "[In our] fight against corruption ... we are getting results."

Sandro Gozi was born on March 25, 1968. He worked in Italy's diplomatic service between 1995 and 1996 and received a doctoral degree in public law from Bologna. He worked in the private office of Romano Prodi, when he was president of the European Commission. He has been a member of Parliament since 2006 and was appointed Minister of European Affairs in the office of Matteo Renzi in 2014.

Juncker rallies support for EU in State of Union address

Jean-Claude Juncker has used his State of the Union speech to attack populism and urge unity within the EU. He also outlined an agenda for the future of the bloc for the first time since the UK Brexit referendum. (14.09.2016)

British Prime Minister Theresa May said Britain's economy was likely going to suffer as a consequence of leaving the European Union. Her comments came as the G20 summit got underway in Hangzhou, China. (04.09.2016)

Italian authorities recently caught more than 40 Sudanese migrants in the Italian town of Ventimiglia on the border with France and deported them. Emanuela Barbiroglio reports from the border. (08.09.2016)

European Parliament draft report on response to the 2009 earthquake