Video footage shows Italian riot police beating a veteran journalist even after he was identified as a reporter. Prosecutors described the incident as "absurd," saying he was doing his job "in a peaceful manner." Italian prosecutors on Friday launched a probe into the beating of Stefano Origone, a journalist for the center-left newspaper La Repubblica.

Origone was beaten by police on Thursday during clashes between the neo-fascist CasaPound movement and anti-fascist protesters in the coastal city of Genova.

"It is absurd that something like that happens," said Genova's chief prosecutor, Francesco Cozzi. "The journalist, Origone, was in the piazza to do his job in a peaceful manner as a reporter. I don't know how he could have been mistaken for a rioter."

Read more: Nationalist and far-right parties rally in Milan ahead of EU vote

'I thought I was going to die'

The veteran journalist said he was pushed down when police charged counterprotesters. They hit him with batons and kicked him while he shouted that he was a journalist, Origone said.

"Over my entire body, which I tried to protect by curling up into a fetal position, they unleashed a rage that I had never encountered, brutality that I had never felt in my 30 years on the streets as a journalist," Origone said in an account published by his newspaper. "I thought I was going to die; I'm not ashamed to say it." 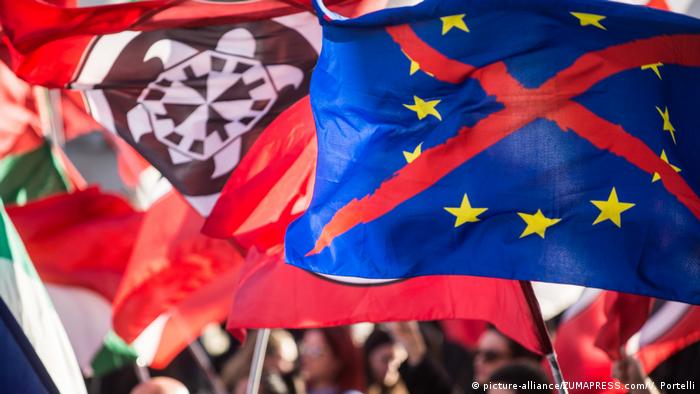 CasaPound views the EU as a threat to Italy

Genova Deputy Prosecutor Francesco Pinto said the police were actively cooperating with the investigation. He noted that law enforcement's cooperation is much better than when charges were dropped against police in 2001 in the death of a 23-year-old activist during clashes at the G8 summit that year.

"Since early this morning, we have received maximum cooperation from the police," Pinto said. "We have no reason to doubt the professionalism and honesty of the police officers."

Italy has been on edge amid a resurgence of far-right activity over the past five years, including growing support for neo-fascist groups, such as CasaPound and Forza Nuova (New Force).

Italian Interior Minister Matteo Salvini, who leads the far-right League Party, rose to power on a wave of support for his right-wing policies.

Italy: The specter of Mussolini