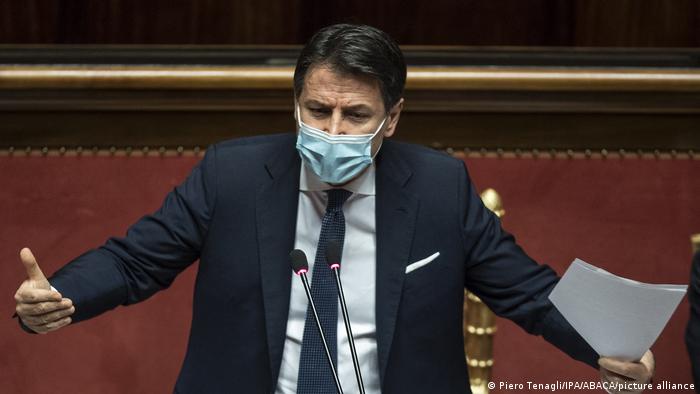 Conte will likely seek to build a new ruling coalition, but with whom?

The office of Italian Prime Minister Giuseppe Conte has announced that he will offer his resignation on Tuesday in hopes of securing a mandate for a new government.

The office said Conte has scheduled a Cabinet meeting for 9 a.m. (0800 GMT/UCT), "during which the prime minister, Giuseppe Conte, will inform ministers of his desire to go to the Quirinal [President Sergio Mattarella's office] to resign."

Italy has been gripped by political turmoil in recent weeks, mainly over the government's handling of the coronavirus pandemic — which has devastated the country. Conte's government began to wobble out of control on January 14 when former Prime Minister Matteo Renzi withdrew the support of his Italia Viva party, robbing the government of its majority.

Despite winning confidence votes in the Senate (156–140) and the lower house (321–259) last week, Renzi's departure left Conte without a clear mandate. Stepping down will now allow him to take a third run at governing the country.

Out of service: Italy's unused hospital

His current 16-month stint at the head of a center-left coalition was preceded by a 15-month government coalition with right-wing populist Matteo Salvini and his League party. That government collapsed when Salvini withdrew his support to launch his own bid to become prime minister.

Canada: Most espionage since Cold War amid pandemic 0m ago