Relatives of Italians who died from COVID-19 are suing the government for negligence in handling the outbreak. Italy was the first country outside China to be hit by the virus, which raged across Lombardy and beyond. 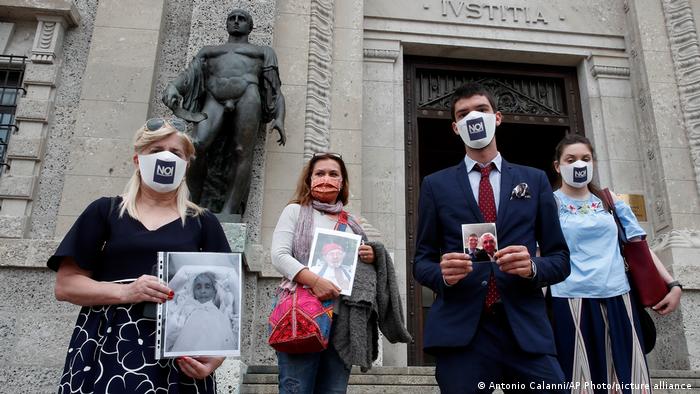 The roughly 500 family members say the government's mishandling of the coronavirus crisis led directly to the deaths of their loved ones. Italy was hit hard by the virus, becoming the first country outside China to suffer the dramatic consequences of its aggressive spread.

The northern Italian region of Lombardy was particularly hard hit, prompting calls for solidarity from EU neighbors. In the civil suit, the families claim that major mistakes early on, such as not quarantining the cities of Alzano and Nembro despite raging infection numbers, as well as a general lack of a plan to tackle the problem were key to the disease's further spread. The suit specifically points to the Lombardy state government's decision to reopen a hospital in Alzano after an outbreak occurred there on February 23 as a crucial health security lapse.

Italy did not enter lockdown until March 10, almost three weeks after the gravity of the situation had become clear. Prosecutors in Lombardy are currently investigating whether that lockdown should have been imposed earlier. The issue has also put state and federal leaders at odds as to who bears blame for the situation.

Lack of a plan in Italy, cover-up at the WHO?

"With proper planning, as requested over and over again by the European Union (EU) and World Health Organization (WHO), we are sure there would have been many fewer [deaths]," said Luca Fusco, president of the Noi Denunceremo (We Will Denounce) group, which has spearheaded the suit and filed some 300 complaints with prosecutors in Bergamo, which itself was overwhelmed by the virus.

The suit rails against the lack of an updated Federal coronavirus management plan — Italy was using an untried 2006 plan at the time the outbreak occurred — which in turn led to a lack of preparedness at the state level.

Prosecutors last week heard testimony from Francesco Zambon, a WHO official who co-authored a report critical of Italy's handling of the crisis. Zambon charges that the WHO engaged in a cover-up by deleting all trace of the report less than 24 hours after its publication.

The report cited the outdated pandemic management plan as well as describing Italy's hospitals as "improvised, chaotic and creative" in their initial response. It is alleged that the WHO report was removed at the urging of Ranieri Guerra, currently the WHO's assistant director general for strategic initiatives. In his previous job in the Italian Ministry of Health between 2014 and 2017, Guerra was responsible for updating the country's pandemic response plan to conform to guidelines laid out by the WHO as well as the European Center for Disease Prevention and Control (ECDC).

About responsibility, not money

To date, nearly 70,000 Italians have lost their lives to COVID-19, almost half since mid-July, when infections between the brutal first and second waves of infection were at their ebb. Unlike other EU nations, Italy has restrained from issuing overly strict lockdown measures since infections began to spike again in October. The government has, however, imposed travel bans over the holiday season to keep the virus from spreading from one region to another.

"Citizens gave the state and regional government the job of protecting their lives and they didn't do it," said Consuela Locati, a lawyer leading the civil case whose father died in the pandemic.

Locati said the suit is not primarily about monetary compensation: "It might only be one euro. But what that one euro would demonstrate is responsibility and the admission of responsibility."