Italy has requested the seizure of the MV Aquarius for alleged anomalies in its disposal of on-board waste. It is the latest obstacle to the rescue ship operating in the Mediterranean. 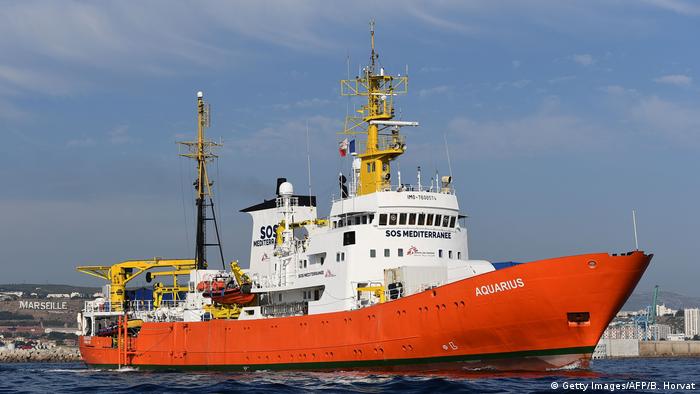 Italian prosecutors requested the seizure of the Aquarius on Tuesday for alleged anomalies in its disposal of on-board waste.

The ship's operators slammed the move as a "disproportionate and unfounded measure purely aimed at further criminalizing lifesaving medical-humanitarian action at sea."

The Aquarius — run by SOS Mediterranee and Doctors without Borders (MSF) — is currently docked at the French port of Marseille due to having its registration flag revoked twice in two months, so the Italian confiscation order was not executed.

Prosecutors in the Sicilian city of Catania said they documented the illegal disposal of 24,000 kilograms of waste by the Aquarius and another MSF ship, the Vos Prudence, between January 2017 and May 2018.

Prosecutors said the waste included clothing worn by migrants with contagious diseases such as scabies, as well as blood-stained bandages and other medical waste.

The ships' crews were accused of dumping the waste material while docked at Italian ports, without separating potentially dangerous items.

By doing so, they avoided paying 460,000 euros ($526,000) of waste disposal costs, prosecutors said. They ordered that this sum be frozen in the accounts of the charities.

MSF refuted the accusations and said its vessels have always followed standard procedures. It plans to appeal to Italian courts.

Italy's interior minister, Matteo Salvini, said the investigation justified his decisions. "I was right to block NGO ships," he said. "I stopped not only the trafficking of migrants but also, as it appears, the trafficking of waste," he said in a statement.

Last of the rescue ships

Before losing its flag, the Aquarius was the last privately-operated ship conducting rescue missions in the Mediterranean.

More than 17,000 migrants have died attempting the dangerous voyage to Europe across the sea since 2014. That year, the number of migrants making the crossing surged, triggering what would be dubbed a migration crisis in 2015.

Since then, several EU member states have been critical of irregular migration, including Italy, which has prevented search and rescue vessels carrying migrants from docking at the country's ports.

More than 100 migrants who were rescued at sea have been waiting months to be transferred to Germany, the German government says. Bureaucracy seems to be the main obstacle. (21.10.2018)