Many grieving Genovese have paid their final respects to the victims of the Ponte Morandi bridge collapse. For some, the tragedy is the latest failure of Italian politics. DW's Elizabeth Schumacher reports from Genoa.

Across Genoa on Saturday morning shops are closed, a picture of a black ribbon hanging in their windows as the city mourns the 41 victims killed when the bridge collapsed on August 14. The signs announce to customers that the stores' staff are joining the thousands who descend on the Pizzale John Fitzgerald Kennedy for a public funeral held inside the Fiera di Genova events arena for some of the dozens of victims of the Ponte Morandi collapse.

There is mostly silence as the mourners file past the coffins, stopping at one draped in scarves and a jersey from Genoa CFC — Italy’s oldest official soccer club is also here to pay its respects. While some mourners have come from as far away as Austria and France (the homelands of several victims), for the most part the atmosphere here is very communal. Draped in Genovese flags, one gets the feeling that something sinister has been wrought specifically against the people of Genoa. 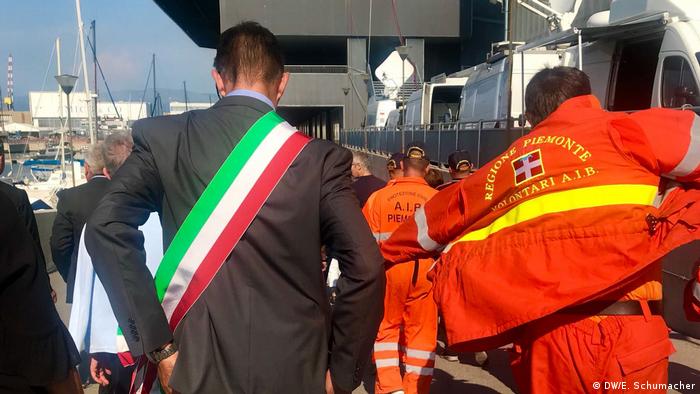 For a while, the only noise comes in the form of massive applause as the firefighters and rescue workers file in. Hundreds of them have come from all over Italy to help in the recovery effort that continues to unearth bodies of victims in the rubble.

But as the politicians arrive, boos and heckling can be heard. A scuffle nearly breaks out after one man chastises another for cheering on Matteo Salvini, the interior minister and leader of the far-right League party.

Only President Sergio Mattarella receives approval from the crowd before he stops to talk to the relatives of the dead.

Anger at the government

"No one is surprised," says 34-year-old Silvia, who has lived in Genoa her whole life and carries an enormous bouquet of white roses. "The central government will scapegoat the bridge company, the company will scapegoat someone else — they're all to blame. We all know how bad our infrastructure is in Italy."

Asked why she isn’t then boycotting the service, as are 17 victims' families, she explains, "We're here to support the rescue services. And the families. And each other."

Italians have long regarded their institutions with suspicion. Having lived through so many iterations of corruption and political stagnation, they have come to view their governments, the things they make and the rules they set as a trick to pull the wool over their eyes. The tragedy of the Ponte Morandi seems to have reconfirmed their suspicions.

"Politics is powerful in Italy," says Gianluca, "but not for the people." In the 55-year-old's eyes, the tragic bridge collapse is just the latest way that Italians have been let down by their politicians.

Read more: Opinion: Instead of reforms after Genoa, Italy's government blames others 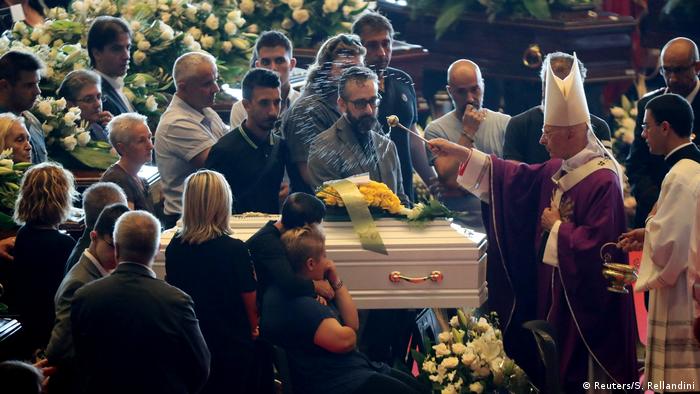 The archbishop of Genoa, Cardinal Angelo Bagnasco, blesses the coffins of victims during the funeral service

Not an act of God

On the other side of town, in the shadow of the broken bridge, the way in which disasters can bring out the best in a community is on full display. Local boy and girl scouts are handing out free food, water and coffee to the firefighters and medics who have been working through the night to clear the debris and look for people who may still be trapped.

"This is the least we can do for our city," says the teenage boy scout Stefano, who adds that he is now too scared to drive on the many crumbling bridges that crisscross Genoa and are the only way in or out of the city surrounded by the Alps on one side and the Mediterranean on the other. Like many Genovese, he wishes the city would go back to being known for its beauty — not its proximity to violent death and criminal negligence. 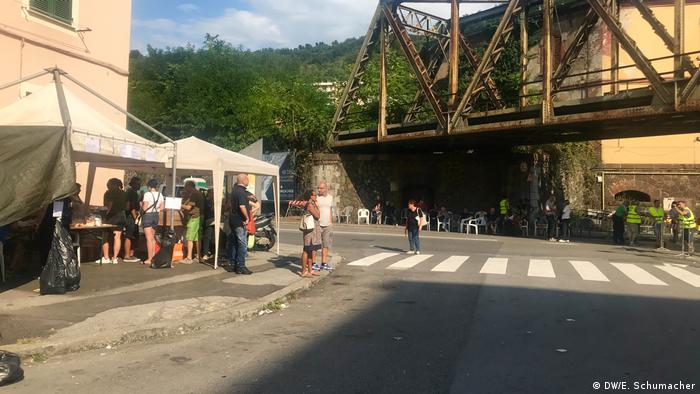 Boy and girl scouts hand out provisions to the rescue workers, who continue to uncover bodies at the site of the bridge collapse

Like most disasters, the Ponte Morandi collapse is likely to hit some of the city's poorest residents the hardest. Hundreds have had to flee their homes in the Sampierdarena district, an industrial area home to many immigrants and high-rise housing. Those who don't have friends and family to stay with have been put in emergency accommodation, and although Prime Minister Giuseppe Conte has said that finding them permanent homes is the government's first priority, no one knows when and where they'll be moved.

One middle-aged man, who says he has been forced from his house in Sampierdarena, stands watching the firefighters line up for sandwiches and drinks.

"Everyone says we are like the people in Amatrice after the earthquakes two years ago," he says, visibly upset. "But an earthquake is an act of God. This is the inaction of men."

Italian media say more people have been found dead amid debris from a collapsed bridge as Italy holds a national day of mourning. But some families of victims are not taking part in ceremonies out of anger. (18.08.2018)

Italy has launched an investigation into the operator of the Morandi Bridge in hope of finding out why it collapsed. A €20 million project to improve the bridge's safety had recently been approved. (17.08.2018)

Can an investigation into the bridge collapse placate an angry public? DW's Charlotte Chelsom-Pill from Genoa

How often are bridges inspected?

A tragedy in Italy. But could it happen in Germany?