A group of soccer fans have been injured — some seriously — when an escalator collapsed at a Rome metro station. Most of those hurt were visiting fans of the Russian football club CSKA Moscow. 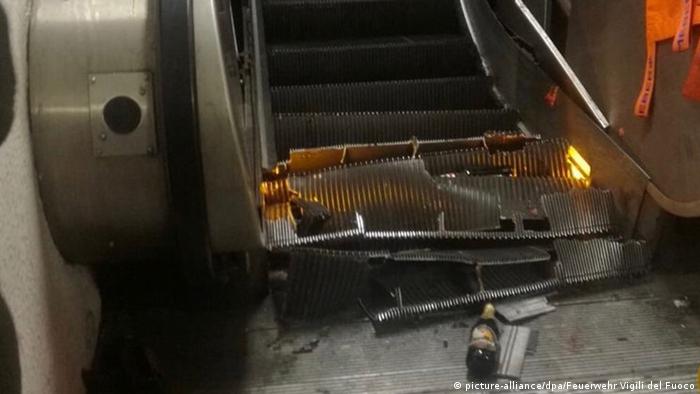 Soccer fans in Rome were injured on Tuesday evening when an escalator packed with traveling supporters suddenly appeared to buckle and give way.

Most of those injured were fans of the Russian football club CSKA Moscow, who were in town to play AS Roma in a Champions League group clash.  The Russian fans were headed for the city's Olympic Stadium, where the match was to take place.

The accident happened at the city center's Repubblica station, near to Rome's main Termine train station.

State television channel RAI broadcast footage of the incident showing how the packed escalator suddenly sped up, hurling people down the stairs. The coverage showed passengers on the opposite side of the escalator pulling clear some of those caught up in the panic.

A CSKA Moscow fan group posted footage of the incident via Twitter.

Some football fans were reported to have been trapped between crumpled metal stair plates at the lower end of the escalator.

Most of those who became stuck had injuries to their legs, with reports that one person had to have their foot amputated. Ten of the injured were said to be in a serious condition.

Rome provincial fire chief Giampietro Boscaino explained what the emergency crew found when they arrived at the scene. "People one on the top of the other looking for help," he said. "They had various injuries caused by the escalator that was twisted, therefore serious injuries."

Local media said the accident was caused because fans started jumping up and down and singing, with Italian news agency ANSA speculating they may have been drunk.

Some witnesses spoke of bottles and shards of glass lying around the scene.

Read more: The fight against racism in Russian football

The metro station was closed in the immediate aftermath, with buses and cars diverted and emergency vehicles deployed outside.

According to the website of Italian daily newspaper La Repubblica, transport operator ATAC said it carried out monthly checks on all of the city's escalators.

Russian footballers Alexander Kokorin and Pavel Mamayev are the subject of a criminal investigation for hooliganism. The pair are accused of carrying out violent attacks in Moscow, which were captured on CCTV. (11.10.2018)

Four weeks of football mania, street parties and exceptionally friendly police: Many Russians don't want the World Cup to end. So will any of the changes in the country's host cities stick? (13.07.2018)

A team of migrants, priests and disabled people has met with Pope Francis in the Vatican. The team is set to play in a charity soccer match, refereed by Lazio star Ciro Immobile, to help the Roma community.

Sport is utterly insignificant in the face of Russia's invasion of Ukraine. However, those connected with it have been making their voices heard.

Essen's young talents are not enough to overcome Cologne and Bayern Munich labor to a victory at the top of the table. Meanwhile, a Cameroonian is the pride of the Russian top flight.