Italy's Coast Guard cited "technical irregularities" and said the ship was carrying too many passengers. SOS Mediterranee, the aid group that runs the ship, called the move "a new level of official harassment." 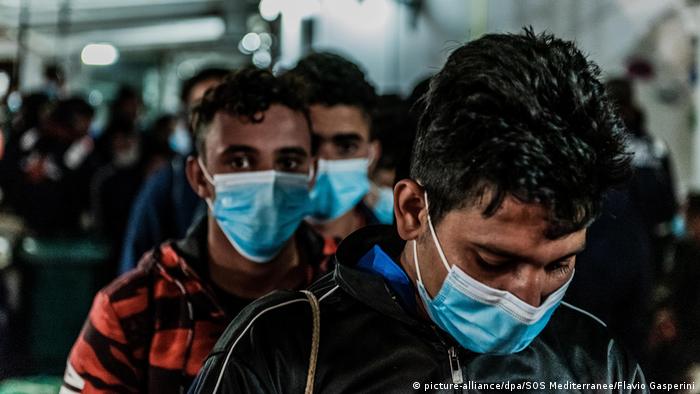 The Italian Coast Guard says it has detained the Ocean Viking migrant rescue ship, blocking it at the Sicilian port of Port Empedocle due to "several irregularities."

The ship had been allowed to disembark at the port on July 7, with 180 rescued migrants onboard transferred to another boat for a two-week coronavirus quarantine. That quarantine ended on Tuesday, but the next day the ship was immobilized.

The Coast Guard said in a statement that an inspection had revealed "several technical and operational irregularities" and the ship was under "administrative detention" until they were corrected. Authorities also said the ship was carrying more people than stated in the ship's certificate.

Rescue organization SOS Mediterranee, which runs the vessel, denounced the move as "a new level of official harassment" and "a blatant administrative harassment maneuver aimed at impeding our lifesaving work."

The agency argued that there are occasionally more passengers on the ship than is allowed for in the ship's documents. That these people should not be defined as passengers, but rather as an "emergency at sea," or people who have been rescued from drowning. "Under international maritime law, their rescue is mandatory," Frederic Penard, director of operations at SOS Mediterranee said in a statement.

The migrants, mainly from Bangladesh, Eritrea, North Africa and Pakistan, were picked up in four separate rescues in the Mediterranean on June 25 and 30.

The ship resumed rescue operations on June 22 following a three-month break due to the coronavirus pandemic.

The Coast Guard did not specify the technical problems, but said they were "of a nature likely to compromise not only the safety of the ship and its crew but also of the people who have been and could be recovered onboard." It also referred to "violations aimed at protecting the marine environment."

The Ocean Viking’s race against time

"Why wasn't safety more of a concern to maritime authorities when, earlier this month, the Ocean Viking had to wait 11 days for a port to be assigned?" Frederic Penard, director of operations at the organization, asked in a statement.

More than 100,000 migrants tried to cross the Mediterranean last year, with more than 1,200 dying in the attempt, according to the International Organization for Migration.

Italy and Malta — for many migrants the early points of contact with Europe — were not offering their ports as safe havens during the initial months of the pandemic. Rome and Valletta, however, recently started admitting people coming in on ships again.

The Italian coastguard has previously taken action on similar grounds against other migrant aid vessels, including earlier this month against the Sea-Watch 3, run by German charity Sea-Watch.