Italy's populist government is determined to stand by its plans to raise its already high deficit despite a formal warning from the EU. Rome has, however, promised to keep an eye on its sizable debt pile. 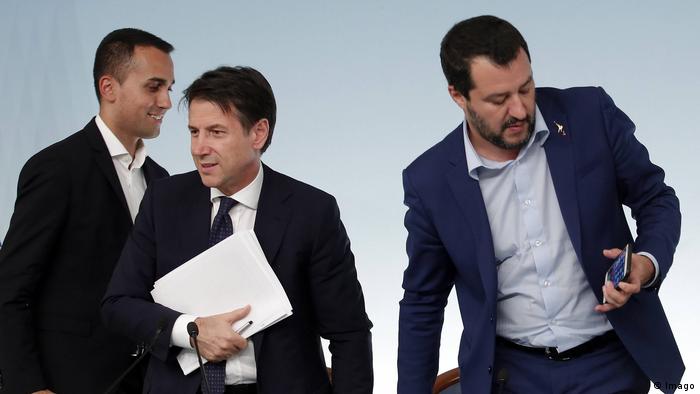 Italian Economy Minister Giovanni Tria has told the European Commission that Italy will raise its deficit to 2.4 percent of gross domestic product (GDP), defying eurozone budget rules. In a letter sent to Brussels in response to a formal warning from the EU.

Tria said he was aware that Italy's 2019 budget was not in line with the EU Stability and Growth Pact, but that raising the deficit was a necessary step to boost the economy.

"(The budget) was a hard, but necessary decision in light of Italy's delay in catching up to pre-crisis levels of GDP and the desperate economic conditions in which the most disadvantaged citizens find themselves in," the letter stated.

Tria assured the Commission that the government would monitor its debt levels and avoid going over its own debt and deficit limits.

Earlier on Monday, the EU's European Economic Affairs Commissioner, Pierre Moscovici, reminded Italy that its structural deficit was "way too high." He told the France Inter radio station that he did not want a "crisis with Italy" over its planned deficit-raising budget and still hoped for "constructive dialogue."

The Commission said it had received Tria's letter and would decide on how to proceed on Tuesday.

EU and Italy line up for budget standoff

How do Italians view the plans? An opinion poll released by Ipsos on Sunday revealed strong support for the proposed budget. Some 59 percent of respondents backed the plans. A majority also said higher government debt was necessary to help stimulate the economy.

Why are the proposals controversial? Although the planned deficit is below the EU's 3 percent limit, it exceeds the 1.8 percent targeted for this year. The European Commission wrote to the Italian government to warn that the difference between the expected budget deficit and the one now foreseen for 2019 was "unprecedented in the history" of EU budget rules.

Why is the European Commission worried?  The EU fears the plans mean that Italy is unwilling to steadily reduce its sky-high debt. Italy already has one of the highest levels of debt in the world, equal to more than 130 percent of gross domestic product (GDP). Moody's credit ratings agency downgraded Italy's credit worthiness to Baa3 — one notch above junk status.

What can the Commission do?  Since 2013, the EU body has had the power to dismiss budget proposals and ask member states to rework them, a power that has not yet been used. It could start infringement procedures if Italy does not comply.

Greece will exit its stability program on Monday. How has the Greek economy developed since austerity was imposed in 2010? And is Greece prepared to meet the budgetary targets? A data analysis provides answers. (19.08.2018)

The EU's budget chief has called for a row over Italy's draft budget to be resolved calmly. Rome's plans to flout eurozone budget discipline rules pushed Moody's to downgrade the country's credit rating. (20.10.2018)