Prosecutors in Sicily have announced 19 arrests, exposing a nationwide network of would-be fascist militants. Police have uncovered weapons, explosives, and extremist propaganda in a series of raids. 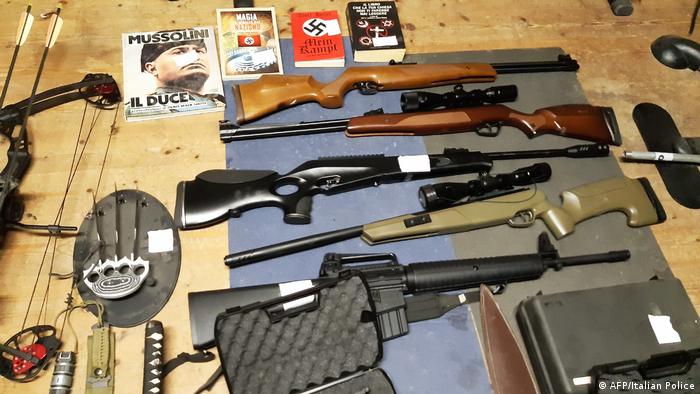 Italian police have arrested at least 19 people in connection with a militant neo-Nazi ring, national media reported on Thursday. Although the investigation was based in Sicily, the suspects hail from all over the country.

One of the arrested included a 26-year-old Milan resident who had been the winner of an online beauty competition called "Miss Hitler." She also spoke at an extreme-right conference in Portugal last August that attempted to unite the so-called "National Socialist movements" of Italy, Portugal, Spain, and France.

During the operation — led by prosecutors in Caltanissetta, Sicily, and dubbed "Black Shadows" — police undercovered troves of weapons, explosives, Nazi memorabilia and texts praising fascist dictators Adolf Hitler and Benito Mussolini, in a series of raids carried out across Italy.

On top of possible weapons charges, promoting fascism is a crime in Italy.

The supposed leader of the group is a 50-year-old public employee from the city of Padua, in the northeastern region of Veneto. She was not known to authorities prior to her detention, police have said, adding that they recovered anti-Semitic material from her home.

Another suspect is an offender with multiple convictions and ties to the 'Ndrangheta, the elusive Calabrian mafia, one of the richest organized crime syndicates in the world and by some estimates responsible for 3% of Italy's GDP. The man, Italian media said, had turned informant for the police against the mafia but was apparently acting as the chief "trainer" for the violence the neo-Nazi group hoped to carry out. Specific center-left politicians were named as possible targets.

The memorial is the latest organization to pull out of the fair over the presence of publisher Altaforte. Altaforte publishes work supporting neo-fascist party CasaPound and the upcoming book of Deputy PM Matteo Salvini. (07.05.2019)

Lovers of fascist architecture never disappeared from Italy's capital, where Mussolini sought to centralize powers. He continues to be revered in one of the Roman neighborhoods the dictator built, and elsewhere. (17.08.2019)