The painting was an oil-on-canvas by the Spanish painter from 1921. The woman won the painting in a charity raffle that raised money for African water projects. 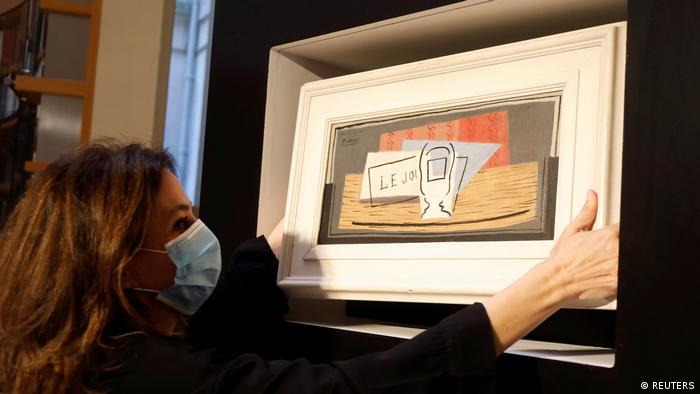 The Christie's auction house announced on Wednesday that an Italian woman won a Pablo Picasso painting worth €1 million ($1.1 million) in a raffle raising money for clean-water projects in Africa.

The winner was identified as Claudia Borgogno, who received her ticket as a gift.

The painting was a 1921 oil-on canvas "Nature Morte," or Still Life, a small abstract by the Spanish painter depicting a table, newspapers and a glass of absinthe.

Read more:  Why Merkel had an expressionist's works removed from the Chancellery

The raffle, delayed due to the coronavirus pandemic, raised more than €5.1 million, selling 51,140 tickets at €100 apiece. Monaco billionaire David Nahmad, who provided the painting, received €900,000, with the remaining funds going to the charity CARE for clean-water projects in schools and villages in Cameroon, Madagascar and Morocco. Nahmad also gave €100,000 to the charity.

"Picasso would have loved an operation like this because he was someone with a lot of interest in humanitarian and social causes," Peri Cochin, organizer of the event, told Reuters news agency.

"This coronavirus crisis has made it clear how important it is to wash your hands, and that can only be done with clear water."

In his late years, Picasso shifted both his studio and his work, focusing on his second wife and muse, Jacqueline, and their home in South France, the Villa La Californie, as can be seen at the Museum Barberini. (11.03.2019)