Israeli Prime Minister Benjamin Netanyahu's move comes a few days after President Trump threatened to cut off US aid to Palestinians. Experts warn that closing the agency could increase poverty and fuel violence. 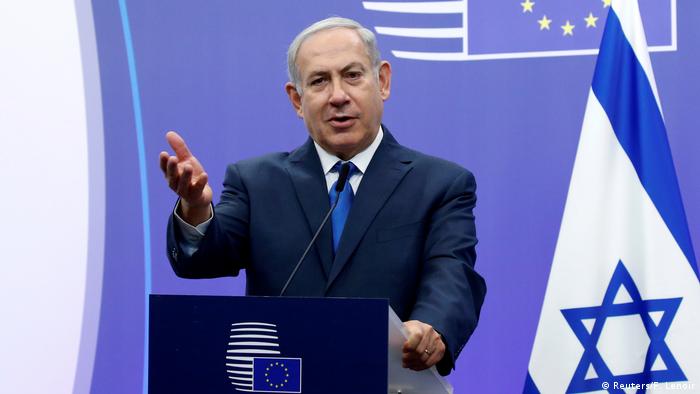 Israeli Prime Minister Benjamin Netanyahu on Sunday called for the closure of a United Nations agency that aids Palestinian refugees in the West Bank and Gaza — a move that critics say would lead to a humanitarian crisis.

Netanyahu's push on Sunday comes just days after US President Donald Trump threatened to cut off aid to the Palestinians.

The Israeli government has long looked at the agency, known as UNRWA, with a jaundiced eye, seeing the agency as biased against Israel.

Israel also objects to the agency's method of classifying refugees, with descendants also eligible to register.

"UNRWA is an organization that perpetuates the Palestinian refugee problem," Netanyahu said at the start of the government's weekly Cabinet meeting on Sunday.

"It also perpetuates the right of return narrative in order to eliminate the state of Israel," he added. "Therefore UNRWA must become a thing of the past."

The prime minister said millions of refugees around the world are aided by the UN High Commissioner for Refugees (UNHCR), but Netanyahu slammed UNRWA as an exclusive aid agency for the Palestinians that also treats "great-grandchildren of refugees — who aren't refugees."

Netanyahu added, "This absurd situation must be ended."

Hundreds of thousands of Palestinians either fled or were forced from their homes during the war that led to Israel's establishment in 1948. Now, 70 years later, there are an estimated 5 million refugees and their descendants, many scattered across the region in countries like Jordan, Lebanon, the West Bank and Gaza Strip.

On Wednesday Trump threatened to cut $300 million in annual aid to the Palestinians in an attempt to force them to the negotiating table.

The US has long provided the Palestinian Authority with much-needed budgetary support and security assistance, as well as an additional $304 million for UN programs in the West Bank and Gaza.

Israel's Channel 10 television reported Friday that the US had already frozen a payment to UNRWA, but a spokesman for the UN aid agency said Saturday that they "have not been informed directly of a formal decision either way by the US administration."

Many political experts, including Israelis, warn that closing the UN agency without an alternative source of aid could result in deepening poverty and, perhaps, an escalation of violence.

"While UNRWA is far from perfect, the Israeli defense establishment, and the Israeli government as a whole, have over the years come to the understanding that all the alternatives are worse for Israel," Peter Lerner, a former spokesman for the Israeli military, wrote in an opinion piece in Haaretz newspaper last week.

"In an extreme situation," Lerner added, "the administration of those refugees could fall on Israel's shoulders."