Israeli Prime Minister Naftali Bennett has been the latest world leader to visit Moscow to speak with President Vladimir Putin about the war in Ukraine. Some see Bennett as a potential mediator between Moscow and Kyiv.

Israeli Prime Minister Naftali Bennett has met with German Chancellor Olaf Scholz in Berlin to discuss the war in Ukraine.

Bennett arrived in Germany after a visit to Moscow, where he spoke with Russian President Vladimir Putin. After meeting with Putin, Bennett called Ukrainian President Volodymyr Zelenskyy.

"We continue to dialogue," the Ukrainian leader tweeted after his talk with Bennett. 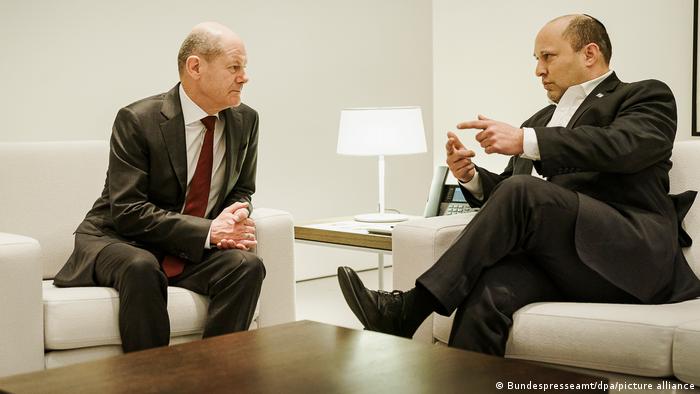 Bennett spoke with Germany's Scholz after meeting with Putin in Moscow

Bennett and Scholz spoke for an hour and a half, according to German spokesman Steffen Hebestreit.

Hebestreit said the two leaders agreed to remain in close contact and were committed to ending the war in Ukraine "as quickly as possible."

Before coming to Berlin, Bennett had a three-hour meeting with Putin. Bennett's office said he departed early Saturday morning for Moscow, accompanied by Russian-speaking Cabinet minister Zeev Elkin, who was born in Ukraine. Both men are observant Jews and would not normally travel on the Sabbath.

What are the implications for Israel?

Israel maintains good relations with both Ukraine and Russia, and has offered to act as an intermediary between the two parties.

Russia is also involved in the war in Syria, which borders Israel.

The founding editor of The Times of Israel, David Horovitz, said the trip had "extraordinarily high stakes." He added that "trying to maintain not neutral but warm relations" with both Russia and Ukraine "may harm Israel's standing in the free world."

Former Israeli ambassador to the US, Michael Oren, said "Bennett's action is bold but also risky."

"Russia is in a different position today, and Putin may be looking for a way out of his predicament," Oren said. "Naftali Bennett may just supply the ladder."

Correction, March 6, 2022: A previous version of this article misspelled the name of the Israeli Prime Minister Naftali Bennett and German spokesman Steffen Hebestreit. DW apologizes for the error.

A cease-fire attempt in two Ukrainian cities has collapsed, with Russia pushing forward with its military offensive. Meanwhile, Americans are being urged to leave Russia immediately.

Ukraine: Video Diaries from the War