A set of Israeli airstrikes in Gaza following rockets striking southern Israel threaten to unravel a ceasefire reached in May. Israel also cut off Palestinian fishing access to offshore waters. 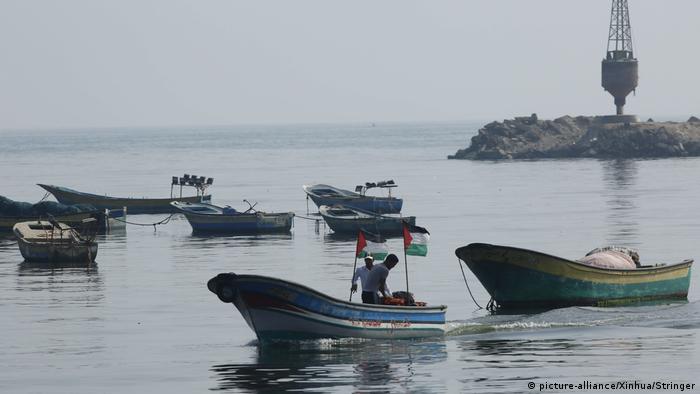 Israeli warplanes struck a target in the eastern Gaza Strip early on Friday in response to a rocket strike on a building in southern Israel in the most serious cross-border incidents in a month.

An Israeli army spokesman said Israeli Air Force warplanes struck targets belonging to Hamas militants. There were no immediate reports of casualties on either side.

The exchange has put in doubt a ceasefire reached in May after the most serious violence since 2014.

The latest conflict was sparked on Wednesday when Israel closed offshore waters to Palestinian fishing boats after incendiary balloons had set fire to Israeli farmland.

"Due to the continuous launching of incendiary balloons and kites from the Gaza Strip towards Israel," the Israeli Defense Ministry said, "it has been decided tonight [Wednesday] not to allow access to Gaza's maritime space until further notice."

There was no claim of responsibility for the rocket or incendiary balloon attacks.

Hamas spokesman Hazem Qassem accused the Israelis of using the situation for electioneering. The threats against the Gaza and Hamas leaders were "only to gain more electoral votes," Qassem said.

Israel reopened its crossings with the Palestinian territory after a decrease in tensions. Gaza Islamists had fired more than 600 rockets at Israel in one of the deadliest escalations in years. (12.05.2019)

Israel is preparing for another election. Prime Minister Benjamin Netanyahu is blaming his political rival Avigdor Liebermann, but Peter Philipp says that what he’s really doing is protecting his own interests. (30.05.2019)