At least four people have been killed and 15 wounded after a truck rammed into a group of Israeli soldiers in Jerusalem. The driver was shot dead by police, who described the incident as a "terrorist attack." 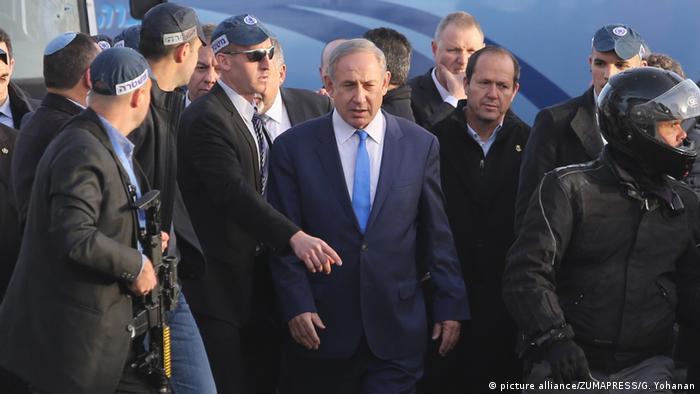 A Palestinian plowed a truck into a group of Israeli soldiers getting off a bus in East Jerusalem on Sunday, killing four people and wounding at least a dozen more in what police described as a terrorist attack. 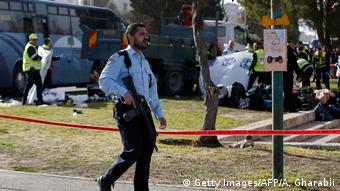 Security forces sealed off the area after the attack

"A lone terrorist drove his truck into a group of soldiers standing on the side of the road," police spokesman Micky Rosenfeld told reporters at the scene. "They got off the bus, and as they were getting off the bus and getting organised, he took advantage."

The driver was shot dead by Israeli forces.

Police Chief Roni Alsheich identified the attacker as a Palestinian resident of East Jerusalem. He added there was no warning or intelligence ahead of the attack that could have prevented it.

Israeli police said they detained five members of the attacker's family for questioning.

Prime Minister Benjamin Netanyahu said in a statement the attacker was likely a supporter of the so-called "Islamic State" (IS) group.

"We know the identity of the attacker, according to all the signs he is a supporter of Islamic State. We have sealed off Jabel Mukabar, the neighbourhood from where he came, and we are carrying out other actions which I will not detail," Netanyahu said in a statement, without elaborating on the alleged IS connection.

On Twitter, the Israeli leader likened the attacks to other deadly truck attacks in Europe, saying the Jerusalem attack followed "the same pattern."

If confirmed, it would be a rare incident of the IS group inspiring or directly carrying out an attack in Israel. There was no immediate IS claim of responsibility.

Following the attack, the United States offered Israeli authorities support as they investigate who was behind the attack.

"Such cowardly acts can never be justified, and we call on all to send a clear and unequivocal message that terrorism must never be tolerated," said National Security Council spokesman Ned Price in a statement. 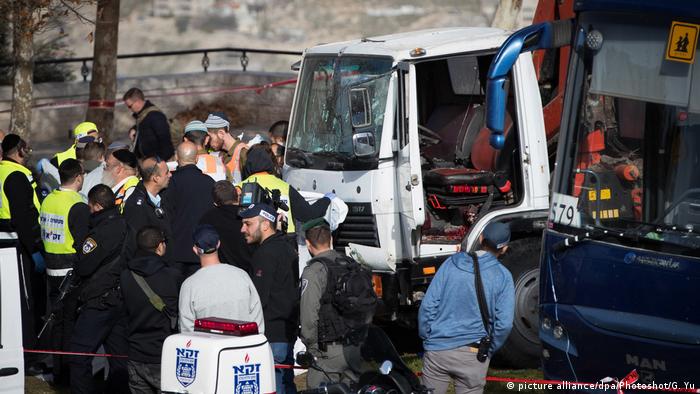 The Israeli military identified the victims as three female soldiers - Yael Yekoutiel, Shir Hadjaj, Shira Tzour - and one male, Erez Auerbach. All four were in their 20s.

Netanyahu posted a picture of the four victims on Twitter and offered his condolences to the families in Hebrew.

The incident occurred at a location overlooking the Old City, where hundreds of soldiers were reportedly on a historical tour of Jerusalem.

Video footage of the attack aired on Israeli Channel 2 TV showed the truck veering off the road at a high speed before slamming into the crowd of people as they got off the bus. The truck then went into reverse in an apparent attempt to crush more people before the driver was shot dead. TV footage showed bullet holes in the truck's windscreen.

Sunday's attack comes after a relative lull in the Palestinian attacks on Israelis that escalated last year. Since September 2015, Palestinian attackers have killed 40 Israelis and two US citizens in a series of stabbings, shootings and truck rammings. The seemingly random attacks have tested the Israeli government's ability to respond despite tough security measures.

The Palestinian Hamas movement praised the "attack" but did not claim responsibility, according to AP.

Abdul-Latif Qanou, a spokesman for Hamas, called the ramming a "heroic" act and encouraged other Palestinians to "escalate the resistance."

Qanou said the wave of Palestinian "resistance" has not ended, despite a recent lull. "It may be quiet, it may linger, but it will never end," he said.

Arrests over death threats to Israeli judges who convicted soldier

Police say online threats were made against three judges who convicted an Israeli solider of manslaughter for shooting dead a wounded Palestinian. The judges have been given military protection following a backlash. (05.01.2017)