The fragments of the biblical texts are believed to have been stashed away in a cave during an armed Jewish uprising against Rome. 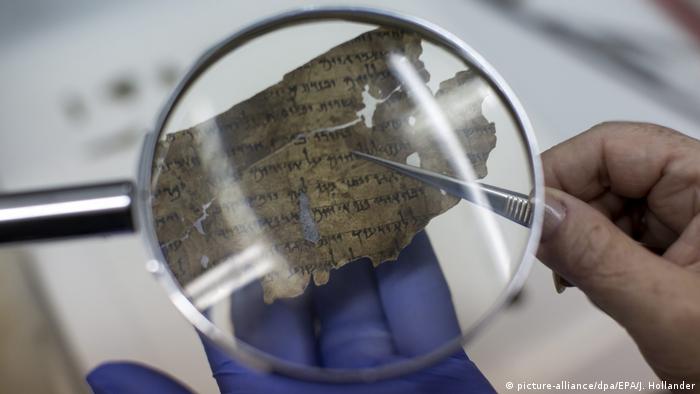 The parchment fragments are the first new scrolls found in archaeological excavations south ofthe city of Jerusalem in the last 60 years.

What have archeologists found?

The artifacts have been radiocarbon dated to the 2nd century AD, according to the Israel Antiquities Authority.

The lines of Greek text on the fragments come from the biblical books of Zechariah and Nahum.

The fragments are believed to have been hidden during the Bar Kochba Revolt, an armed uprising against Rome during the reign of Emperor Hadrian, between 132 and 136 AD.

"For the first time in approximately 60 years, archaeological excavations have uncovered fragments of a biblical scroll," the Israel Antiquities Authority (IAA) said in a statement.

The fragments also include passages written in Greek from the Book of the Twelve Minor Prophets, which is part of the Hebrew Bible.

One fragment, from the book of Zechariah, reads: "These are the things you are to do: Speak the truth to one another, render true and perfect justice in your gates."

While the text is in Greek, the name of God is written in ancient Hebrew script, the IAA said.

How the latest pieces were discovered

The relics were found in an operation in the Judean Desert to find scrolls and other artifacts to prevent possible plundering.

They found the fragments in a site known as "The Cave of Horror," so named because of the 40 human skeletons found there during excavations in the 1960s.

What are the Dead Sea Scrolls?

The Dead Sea Scrolls are a collection of Jewish texts found in desert caves in the West Bank in the Qumran caves above the Dead Sea.

The scrolls date from the 3rd century BC to the 1st century AD and include the earliest known copies of biblical texts. The documents are also considered to be of use in outlining the beliefs of a little-understood Jewish sect.

Egypt's ancient writing system remains a mystery to many. One museum in Jerusalem is hoping to change that by introducing emojis to increase understanding of hieroglyphs in the digital age.

The Museum of the Bible has announced that five pieces of its centerpiece Dead Sea Scrolls collection are fakes. German researchers found that the fragments had showed "characteristics inconsistent with ancient origin."

A German-Egyptian archaeological team has unearthed an 8-meter colossus depicting one of ancient Egypt's most powerful pharaohs. The statue was found in the working class Cairo neighborhood of al-Matariya.

Archaeology and Bible experts work together to explain the past 07.04.2021

Was Christ really crucified and did he really even exist? These questions have mystified not only the followers of Christianity but also scientific experts.

US issues first passport listing 'Israel' as place of birth for Jerusalem-born citizen 30.10.2020