Violence has flared in the Gaza Strip after Israel assassinated an Islamic Jihad leader in an airstrike. Benjamin Netanyahu has warned the group to stop the rocket attacks or "absorb more and more blows." 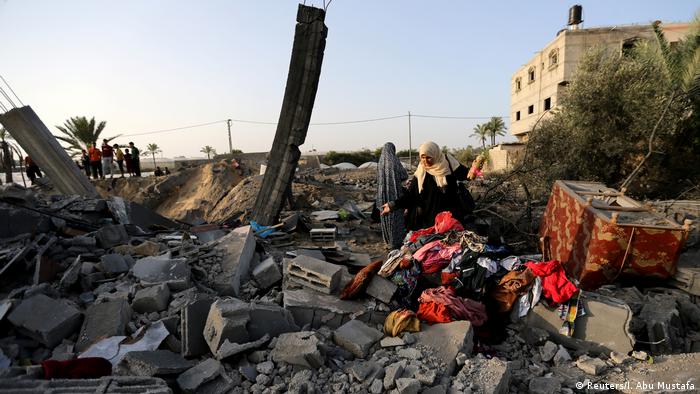 Militants continued to launch rocket fire into Israeli territory after a brief overnight lull, with about 250 rockets being launched, according to the Israeli military.

The death toll now on the Palestinian side stands at 22 in the past two days.

The Iran-backed group said the assassination of its leader on Tuesday was a "declaration of war."

"They have one choice: to stop these attacks or absorb more and more blows. Their choice," Netanyahu said at the start of a cabinet meeting.

Netanyahu said Israel was not seeking a further escalation, but that "this could take time" and that Israel would respond to attacks "without mercy."

Hamas has so far avoided joining the fighting and Israel has kept its operations targeted at Islamic Jihad.

DW's Israel correspondent Tania Krämer said civilians in the south of the country and in the Gaza Strip were worried that the violence would escalate further.

"Schools are closed and no one knows how long this will last or whether it will turn into a war," she said. "The situation is so unpredictable and it is a difficult time for civilians on both sides."

Israel's ambulance authorities said it had treated 48 people for light injuries related to the rockets.

Egypt, which often acts as an intermediary between Gaza and Israel, is again working to de-escalate tensions, according to officials in Cairo. United Nations Mideast envoy Nickolay Mladenov reportedly arrived in Cairo on Wednesday and is scheduled to meet President Abdel-Fattah el-Sisi.

An Islamic Jihad spokesman told Reuters news agency it had no intention of slowing down its attacks.

"Attempts to restore calm did not succeed, the Islamic Jihad see that it is time to respond to the assassination policy, which was revived by the Zionist enemy," the unnamed official said.

"The enemy will pay the price of its foolishness and we are determined to confront this aggression with all our might."