Israel has carried out new round of airstrikes on Gaza after Hamas shot rockets towards southern Israel. Diplomatic attempts for a cease-fire have failed to de-escalate tensions. 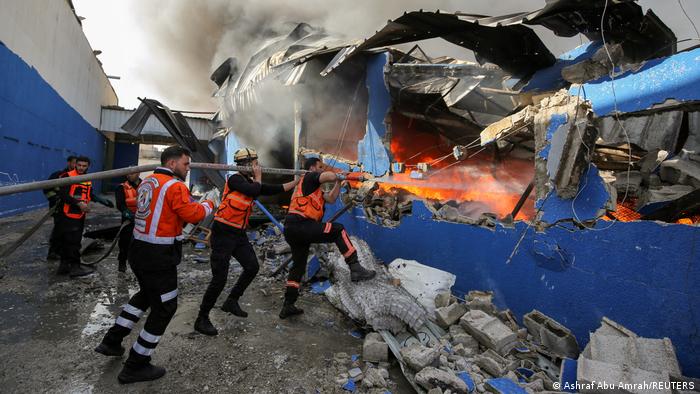 The Israeli military claimed it destroyed 15 kilometers of militant tunnels

Israel carried out airstrikes on the Gaza Strip early on Monday, after rockets from the Palestinian enclave targeted southern Israeli cities such as Ashkelon and Beersheva. The crisis has entered its second week, as diplomatic attempts for a cease-fire fail to make progress.

The airstrikes primarily targeted Gaza City, with explosions at one point rocking the area for 10 minutes straight, according to AP news agency. Local media reported that the airstrikes disrupted Gaza's electricity supply.

The military claimed it destroyed 15 kilometers (nine miles) of militant tunnels and struck the homes of nine Hamas commanders during its early morning aerial campaign.

Rocket alarms again sounded in southern Israel following the latest round of airstrikes.

At least 197 Palestinians have been killed in Gaza, according to the enclave's Health Ministry. Ten Israelis have died so far from the fighting.

A round of Israeli airstrikes early Sunday killed 42 people, including women and children.

'We expect conditions to become worse'

Gaza's mayor Yahya Sarraj told Al-Jazeera TV that the airstrikes had caused extensive damage to roads and other infrastructure. "If the aggression continues we expect conditions to become worse,'' he said.

Meanwhile, the Israeli military said that militants have fired around 3,150 rockets from the Gaza Strip toward Israel since shelling began. About 460 of the rockets never made it across the border and went down in Gaza territory, while the Iron Dome missile defense system had an interception rate of about 90%, it said.

As a result of the shelling, around 42,000 Palestinians in the Gaza Strip have fled their homes, seeking shelter in 50 schools run by the UN Palestinian Relief and Works Agency, the organization said. More than 2,500 people have been left homeless in the current conflict.

"The latest round of fighting only perpetuates the cycles of death, destruction and violence ... The fighting must stop, it must stop immediately," Guterres said in his opening statement at the meeting

The US Ambassador to the UN, Linda Thomas-Greenfield, told the Security Council members that the US is "working tirelessly through diplomatic channels to try to end this conflict."

US Secretary of State Antony Blinken spoke with the Qatari, Egyptian and Saudi foreign ministers by phone on Sunday in an attempt to quell the violence, according to the State Department.

Palestinian and Israeli leaders traded blame for the violence during the Security Council session.

Palestinian Authority Foreign Minister Riyad al-Maliki demanded the US "shoulder its responsibilities" and accused Israel of "war crimes" during the gathering.

"Act now to end the aggression and the assault on our people, our homes, our land. Act now so freedom can prevail, not apartheid," al-Maliki told members. "Israel always says put yourselves in our shoes. But Israel is not wearing shoes. It is wearing military boots."

Israeli Ambassador to the UN Gilad Erden claimed the current round of tensions was "premeditated by Hamas to gain political power."

"Do you really believe this property dispute is what caused Hamas to launch these large-scale attacks on the people of Israel?" Erdan told members, referring to the eviction of six Palestinian families from the East Jerusalem neighorhood of Sheikh Jarrah.

During an interview with US broadcaster CBS News, Netanyahu defended an Israeli airstrike on a building which housed news outlets in Gaza, saying the structure was used by Hamas to carry out terrorist operations.

Reporters without Borders has called on the International Criminal Court to investigate the airstrike on the media building and determine whether it was a war crime.

How have other countries responded to the escalating violence?

Egyptian President Abdul Fattah el-Sissi issued a statement on Sunday calling for a "cessation of all violence and hostilities." Egypt also sent ambulences to the Gaza Strip to evacuate the wounded.

The 57-member Organization of Islamic Cooperation convened an emergency meeting on Sunday, with regional foreign ministers taking part. Saudi Arabia said during the gathering that Israel was committing "flagrant violations" against Islamic holy sites and Palestinians.

US President Joe Biden said his administration is working towards "sustained calm" between Israelis and Palestinians in pretaped video remarks that were screened at an event celebrating the Islamic holiday of Eid al-Fitr.

In Canada, pro-Palestinian and pro-Israeli demonstrators clashed in Montreal.

What triggered the current crisis?

The ongoing crisis was triggered by the pending evictions of the six Palestinian families from their homes in Jerusalem's Sheikh Jarrah neighborhood. Right-wing Jewish settlers claim the land was owned by Jews prior to 1948.

Israel postponed the legal hearing on the evictions as a means to defuse tensions.

The crisis then escalated when Israeli security forces broke up Palestinian worshippers in the holy Al-Aqsa mosque last week. Muslims typically congregate for group prayer at the mosque in order to celebrate the holy month of Ramadan.

Last Monday, Hamas threatened to shoot rockets towards Israeli cities if security forces did not leave the Temple Mount. Israel refused to remove troops from the area.

Hamas then launched rockets towards Jerusalem for the first time since the 2014 Gaza War. In response, Israel began its military operation against Hamas in the Gaza Strip, termed "Guardian of the Four Walls," a reference to Jerusalem.