Israel has approved the first new West Bank settlement in two decades. The decision comes despite international concern settlement building is an obstacle to peace. 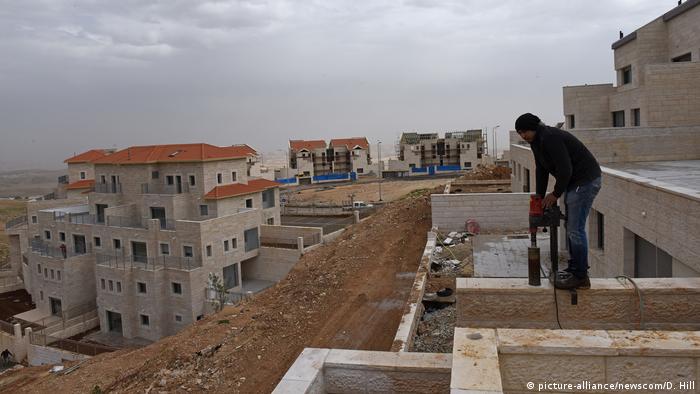 Prime Minister Benjamin Netanyahu's security cabinet on Thursday approved the first new settlement in the occupied West Bank in two decades, despite international concern they are an obstacle to peace.

The security cabinet unanimously approved the new construction around Shiloh, near the Palestinian city of Ramallah, to house settlers from a Jewish outpost in the West Bank known as Amona. That illegal settlement was destroyed in February after a court found it was built on privately owned Palestinian land.

Netanyahu had previously vowed to house dozens of families from Amona in a new settlement. "I promised to create a new community and we are going to respect that commitment and create it today," he said in a statement before the security cabinet meeting.

The Palestinians quickly condemned the decision.

"Today's announcement once again proves that Israel is more committed to appeasing its illegal settler population than to abiding by the requirements for stability and a just peace," said Hanan Ashrawi, an executive committee member of the Palestine Liberation Organization.

Settlements in land Israel captured in the 1967 Six-Day War are considered illegal by most of the international community and an obstacle to restarting peace talks as they are built on land Palestinians claim for a future state.

The move comes after last month US President Donald Trump, who had been viewed supportive of settlements, told Netanyahu at the White House to "hold back on settlements for a little bit" in order to open space for renewed peace talks.

Emboldened by Trump's election victory, Israel approved thousands of new settler homes in existing settlements in the first month of the new US administration. The settlement activity may be a way for Netanyahu to gain support from far-right members of his coalition government.

Earlier this week, UN Middle East envoy Nickolay Mladenov told the UN Security Council in his first report since a December resolution condemning illegal settlements that there was a spike in new building within existing settlement blocs, indicating "a clear intent to continue expanding the settlement enterprise in the occupied Palestinian territory."

There are about 550,000 Jewish settlers in the West Bank and East Jerusalem living amid some three million Palestinians, according to the Israeli human rights group B'Tselem. The settlements include those that Israel considers legal as well as at least 100 wildcat outposts.

Since the 1993 peace agreement between Israel and Palestine, the number of settlements has increased more than threefold, threatening the viability of a two-state solution.  The settlements have turned the land of a future Palestinian state into a patchwork marked by Jewish-only roads, security barriers and military checkpoints.

Israel argues most settlements would be included within Israel as part of any future peace deal in exchange for giving Palestinians land of equal quality and quantity. Israel also cites biblical, historical and  security interests to defend settlements.

Arab states have offered Israel a reconciliation deal provided it cedes land captured in 1967 to a future Palestinian state. US President Donald Trump had rattled leaders when he said he was open to a one-state solution. (29.03.2017)

Washington's ambassador to the UN has called for the damning report to be withdrawn immediately. The UN secretariat has distanced itself from the publication, saying it solely reflects the authors' views. (16.03.2017)