Arab states have offered Israel a reconciliation deal provided it cedes land captured in 1967 to a future Palestinian state. US President Donald Trump had rattled leaders when he said he was open to a one-state solution. 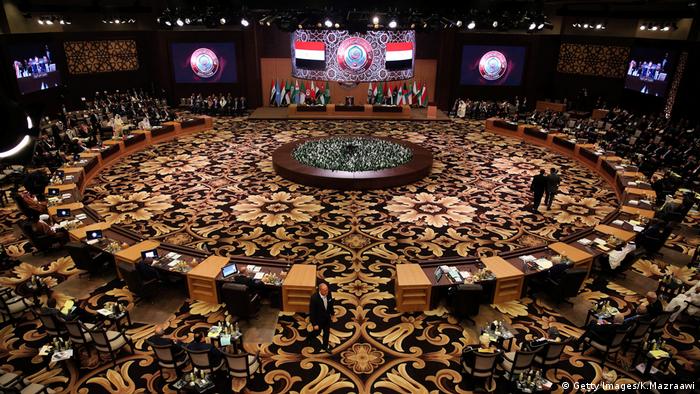 Arab leaders on Wednesday said they would renew a historic reconciliation offer with Israel in return for its withdrawal from land it has occupied since the 1967 war.

A communique read out at the end of Wednesday's Arab League summit on the Jordanian side of the Dead Sea said that "peace is the strategic option" and that Arab states would back Palestinian-Israeli peace talks if they guaranteed the creation of a Palestinian state alongside Israel.

Palestinians want to establish a state in the West Bank, Gaza Strip and east Jerusalem - all of which Israel captured and to varying extents continues to occupy.

Arab leaders had previously pitched such a "reconciliation" deal back in 2002.

Palestinian President Mahmoud Abbas said the summit resolutions would "send a clear message to the world" of a united Arab stance, while Jordan's Foreign Minister Ayman Safadi said the Arab Summit ended with a "message of peace."

Although he was never mentioned by name, the summit resolution also aimed to send a message to US President Donald Trump, who rattled Arab and European leaders in February when he suggested that the internationally backed notion of a two-state solution would not be the only feasible approach.

That has appeared to empower Israeli Prime Minister Benjamin Netanyahu. During his speech on Tuesday to AIPAC, a pro-Israel American lobby group, Netanyahu gave little lip service to the notion of a two-state solution.

The summit's host, Jordan's King Abdullah II, reaffirmed the region's position that the creation of a Palestinian state would form the basis of any peace deal.

"Israel is continuing to expand settlements and wreck chances of peace," he said. "There is no peace or stability in the region without a just and comprehensive solution to the Palestinian cause through a two-state solution."

Arab leaders also urged countries the world over not to relocate their embassies and consulates in Tel Aviv to the disputed city of Jerusalem, something Trump has said he intended to do.

The summit came ahead of a series of White House talks with Arab leaders. Jordan's King Abdullah II, Egyptian President Abdel-Fattah al-Sisi and Palestinian President Mahmoud Abbas are all scheduled to meet with Trump.