Islamists in Germany: Quiet, but dangerous

A stabbing spree in the German city of Würzburg has renewed focus on the threat of Islamism, even if the attacker's motive remains unclear. 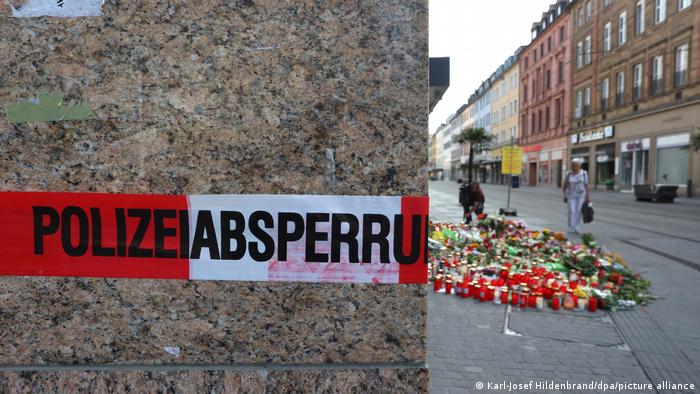 The stabbing in Würzburg has sent shockwaves through Germany

Last week's knife attack in the Bavarian city of Würzburg left three people dead and seven injured — five of them seriously. The suspect is a man from Somalia whose asylum application had been rejected.

Police are investigating his motives, including potential links to violent Islamism. So far, all they can confirm is that he was being treated for psychological issues.

Just the whiff of Islamist extremism brings the debate over religiously and politically motivated violence back into focus in Germany. It recalls memories of the Islamist-inspired Christmas market attack in Berlin, which left 12 people dead and more than 60 injured, as well as far-right attacks in Halle and Hanau in 2019 and 2020 respectively, targeting Jews and people with Turkish roots. Walter Lübcke, a regional conservative politician, was gunned down in front of his home in 2019 for his pro-refugee stance.

In some of these incidents, police have been criticized for failing to act to prevent the crime or help the victims.

Germany's latest domestic intelligence report, presented in June, views far-right extremism as the biggest threat to society. It also included information about the potential for left-wing and Islamist violence.

Authorities tied 409 crimes to "religious ideology" in 2020. That marked a 13% increase over the year before. More than 90% of those crimes were linked to Islamists; however, many were non-violent. The 33 crimes that resulted in death marked a 20% drop over 2019 figures.

The report noted that sophisticated attacks plotted from abroad were "conceivable at any point," but none have actually taken place. Lone-wolf attacks, regardless of motive, are instead the bigger threat and are "meaningful for the goals of terrorist groups."

Single attackers may have no formal ties to any groups or movements, the intelligence report suggested, but may be inspired by them to attack "soft" targets. That was "probably" the case in Dresden last year when two tourists were stabbed in a homophobic attack. One of them died.

Another one-off attack took place in Berlin in 2020. This time it was a car that rammed motorcyclists, leaving six people injured. The suspect's "psychological impairment" may have made an Islamist motivation more appealing, the report said.

Similar attacks in Germany's neighboring countries, such as France and Austria, have authorities worried about copycat crimes here.

Nearly 700 people are classified as potential perpetrators and are under surveillance in Germany, according to a government statement from earlier this year. Most of them are suspected of having the potential to carry out crimes due to their religious fervor, largely Islamist in nature.

In 2020 the government said it is aware of 240 Islamists who are at large and could potentially pose a threat.

Some 135 of these people were reported to have German citizenship, while a third of them have other nationalities — 41 Syrians, 17 Russians, seven Iraqis, seven Turks and people from around 20 other countries. The nationality of seven Islamists was termed "unclear," while three had been registered stateless.

German domestic intelligence authorities have also expressed concern about radicalization abroad that comes back home. About 1,100 Islamists are reported to have gone to Iraq and Syria since 2012. One-third of them have returned to Germany, including some who have then been sentenced to prison for various crimes.

Both their incarceration and release pose a "particular challenge" to Germany's security and justice apparatus, the report said.

A new report on terrorist activity in the EU has highlighted the threat of online propaganda during the pandemic. The research shows Islamist and far-right extremists have posed the greatest threat.