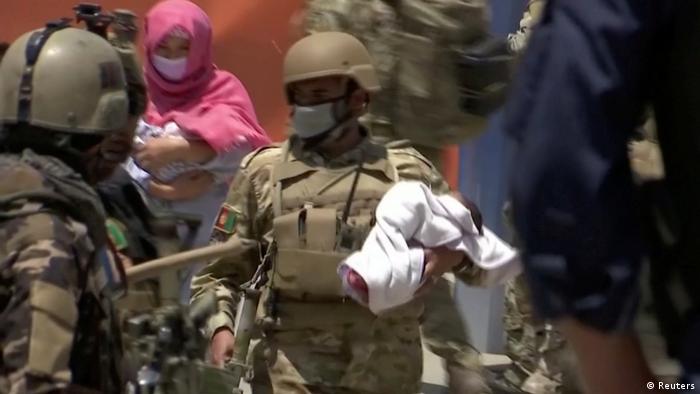 The US government has assessed that the "Islamic State" (IS) is responsible for two separate attacks in Afghanistan earlier this week that killed over 50 people, Zalmay Khalilzad, the US special envoy for Afghan reconciliation, said Thursday.

The fresh violence was a blow to the shaky peace deal in the war-torn country signed in February by the US and the Taliban. The deal was supposed to pave the way for talks between Taliban militants and the Afghan government, but little progress has been made. Khalilzad said that IS in Afghanistan opposes a peace agreement between the government and the Taliban, and is trying to further destabilize the region.

"Rather than falling into the ISIS trap and delay peace or create obstacles, Afghans must come together to crush this menace and pursue a historic peace opportunity,"  Khalilzad said on Twitter Thursday.

Taliban carries out another attack

Afghan President Ashraf Ghani ordered the Afghan military to launch an offensive against the Taliban following Tuesday's attacks. The Taliban said the move was a "declaration of war."

On Thursday, the Taliban carried out a suicide bombing in Afghanistan's eastern Paktia province, targeting a military compound. The explosive detonated before it reached its target, and killed five civilians and injured at least 29 others, Afghan officials said.

The Taliban said the attempt at bombing an Afghan military post was in retaliation for President Ghani's statements blaming the militant group for the attacks earlier in the week.

The ongoing tit-for-tat between the Taliban and the Afghan government is drawing concern that the peace deal signed in Doha is not bringing stability.

"Prospects for moving forward in the peace process are certainly in a worse state than they were a week ago, but it would be premature to declare the process dead," Andrew Watkins, senior analyst for Afghanistan at the Crisis Group, told DW.

"There are strong incentives [or disincentives] that the United States is pressuring both parties with, and neither wishes to be seen as the party that takes a step to close the window on peace."

US refuses to release data on Taliban attacks in Afghanistan — watchdog

A US watchdog has said the NATO-led mission to Afghanistan has withheld information on the number of Taliban attacks in 2020. President Trump is keen on the success of a peace agreement between the US and the Taliban. (01.05.2020)

Germany: Refugees sue the government for invasion of privacy

A law that allows Germany's migration authorities to access refugees' phones will now be challenged in court. Three refugees — from Syria, Afghanistan and Cameroon — have decried what they see as a violation of rights. (06.05.2020)

Health experts warn that the pandemic could have devastating consequences for the war-ravaged nation. Without a unified response and access to enough tests and ventilators, it risks facing a highly deadly outbreak. (22.04.2020)