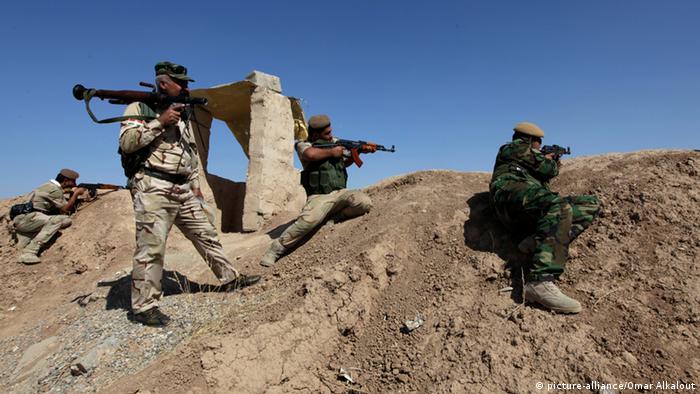 The capture of the Mosul Dam could give the group a base from which to attack major cities and aid its bid to topple Prime Minister Nuri al-Maliki's Shiite-led government. ISIS's capture of the northern town of Sinjar has already forced up to 200,000 people to flee, the United Nations announced on Sunday.

"A humanitarian tragedy is unfolding in Sinjar," UN envoy Nickolay Mladenov said Sunday after ISIS, formerly known as the Islamic State in Iraq and the Levant, captured the town near the Syrian border, which had served as a refuge for thousands of families displaced from elsewhere in previous fighting.

After beating militia fighters (pictured) to take territories in what had until recently been a stronghold for the transnational Kurdish minority, fighters hoisted the ISIS flag. The group has declared a caliphate in an area on the Iraq-Syria border and taken aim at the region's various sects, including the dwindling Christian population in areas such as Mosul.

In the town of Sinjar, witnesses told news agencies that residents had fled after Kurdish fighters put up little resistance against ISIS. On its Twitter site, ISIS posted a picture of one of its masked fighters holding up a pistol and sitting at the desk of the city's mayor. In a statement on its website, ISIS reported that its fighters had killed scores of Kurdish militiamen.

"Hundreds fled leaving vehicles and a huge number of weapons and munitions, and the brothers control many areas," ISIS reported. "The fighters arrived in the border triangle between Iraq, Syria and Turkey," the group claimed.

After soldiers fled ISIS's offensive on Mosul and Tikrit in June, abandoning arsenals the group took over, militias became a critical line of defense. However, Sunday's battles have called into question the reliance on militias, increasing pressure on Iraq's leaders to form a power-sharing government uniting political, ethnic and religious factions against ISIS.

In July, the Kurdish political bloc ended participation in Iraq's national government in protest over Prime Minister's Maliki's accusation that the ethnic group had allowed "terrorists" to stay in Arbil, the capital of the minority's semiautonomous region.

So far, ISIS has stalled in its drive to reach Baghdad, halting just before the town of Samarra, about 100 kilometers (60 miles) north of the capital. ISIS has, however, proved successful at consolidating its gains, capturing strategic towns near oil fields, as well as border crossings with Syria so that it can move easily back and forth and transport supplies.

The battles in Iraq have led international airlines, including Germany's Lufthansa, to reroute flights away from the country.