ISIS fighters have occupied a monastery near northern Iraq’s predominantly Christian town, Qaraqosh. The Sunni militants have increasingly targeted Iraq's Christian minority, forcing many to flee Mosul over the weekend. 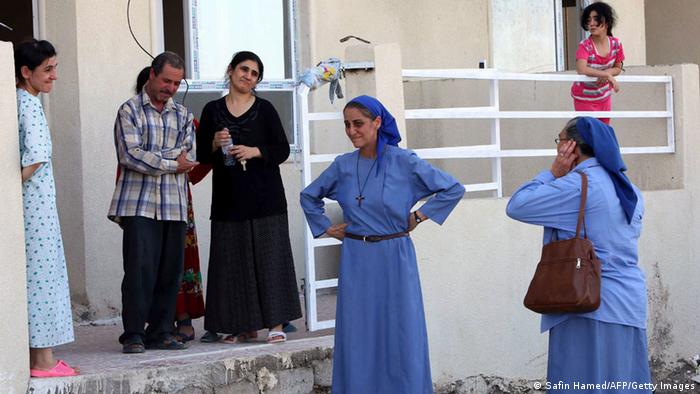 News agency AFP quoted a cleric who heard the militants saying, "You have no place here anymore; you have to leave immediately." The monks were reportedly forced to abandon all their possessions and leave the monastery with nothing except the clothes they were wearing.

Christian families in the area said nearly nine monks may have been living in the monastery. Several hundred Christian families living in Mosul were forced to flee from their homes over the weekend (pictured) after ISIS fighters demanded that they convert to Islam or pay a special tax. In some cases, local residents were given an ultimatum to either leave or face death at the hands of ISIS fighters.

The Saint Behnam or Mar Behnam is a prominent Christian pilgrimage site in Iraq where devotees pray for healing and fertility. It was built in the fourth century by the Assyrian king Sennacherib II, who killed his two children Behnam and Sarah for converting to Christianity.

ISIS is a group of Sunni jihadist fighters who want to create a state based on an orthodox interpretation of the Shariah, or Muslim law. The group has declared a caliphate in the large swath of territory that it controls in Iraq and Syria.

The group is known to be relatively lenient with Christians as compared to Shiite Turkmen and people from ethnic groups like the Shabak and Yazidis. But some analysts believe that this may have been an ISIS ruse to placate less orthodox Sunni groups.

"They tricked us, because in the beginning they did not threaten us, but after they established themselves, they began imposing their terrorist laws on us," said Father Emmanuel Kelou, who once headed a church in Mosul.

On Saturday, ISIS militants targeted a Shiite neighborhood in Baghdad, killing at least 25 people. The ISIS occupied large areas of Iraq after which Iraq's army launched an offensive to regain control of Tikrit in the country's north. However, the army - which is being backed by Shiite fighters - has been unable to recapture significant areas.