Is NATO finally in Finland's future? 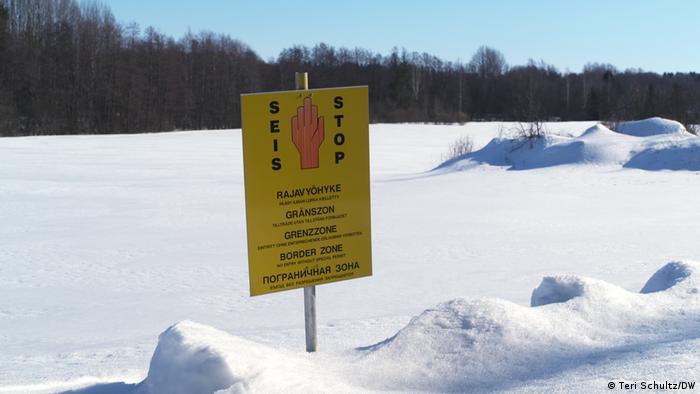 The war in Ukraine has left many wondering: Will Finland join NATO?

What line won't the Kremlin cross? Nobody knows anymore, not even in a country like Finland, which has much experience in reading Russia's signals.

Stretching over 1,300 kilometers (807 miles), Finland's eastern frontier is the European Union's longest border with Russia. It has been peaceful between the countries since the end of World War II. But, now that Russia has — without provocation — attacked another sovereign neighbor, Finns aren't taking their situation for granted.

But at Vaalimaa, the checkpoint closest to Helsinki, Captain Jussi Pekkala said things are normal so far since last month's invasion of Ukraine, aside from what he said was a relatively small number of Ukrainians and Russians seeking to flee the conflict. 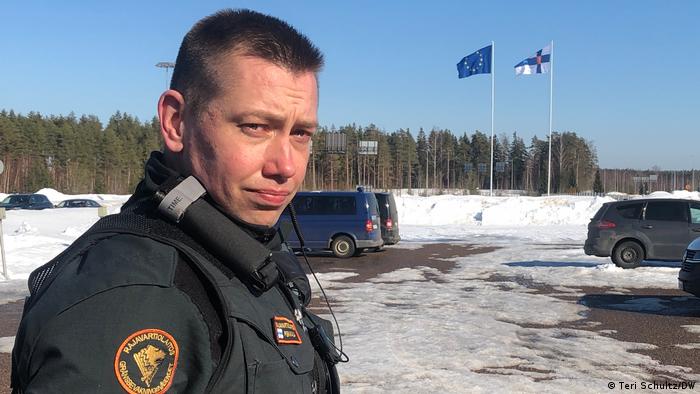 Captain Jussi Pekkala of the Finnish border guard says while the border is where changes in the political environment show up first, the 1340 km-long Finnish-Russian border has seen nothing out of the ordinary so far

Vigilance is the norm

"Of course, we are prepared and we are preparing ourselves for many kinds of situations," he told DW. "I wouldn't say it's a 'state of alert', but if you are on any border, all the changes in the environment, it will actually be the first place where you'll see those changes."

A change to this environment would be extremely unwelcome in Finland, which has worked for decades to maintain its delicate geo-strategic balance outside any military alliance, carefully tending both a civil relationship with Moscow and a well-equipped, highly-trained military.

Until now, Finns felt they didn't need the mutual defense guarantee of NATO allies, with a majority of the population consistently rejecting any suggestion of seeking membership.

That was until February 24 — when Russia attacked Ukraine.

Sudden but not surprising

Suddenly, according to a poll commissioned by the national broadcaster YLE, 53% of respondents wanted to join NATO. This month, that figure climbed even higher — to 62%. 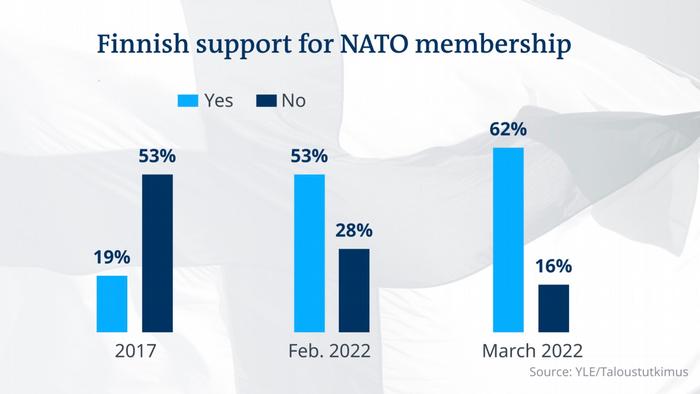 Finnish Defense Minister Antti Kaikkonen said that while the surge in NATO support is "huge," the reasons are clear. "People have thought that we would live in peacetime in the 2020s, but now we have a war in the middle of Europe, not so far from Finland," he told DW after a meeting at NATO headquarters in Brussels earlier this month, to which he and his Swedish counterpart were invited.

Kaikkonen explained that the government will deliver parliament an updated assessment in April of the country's changed security situation, putting the NATO debate firmly on the table. Many believe after a subsequent public and parliamentary debate, Finland will seek membership. 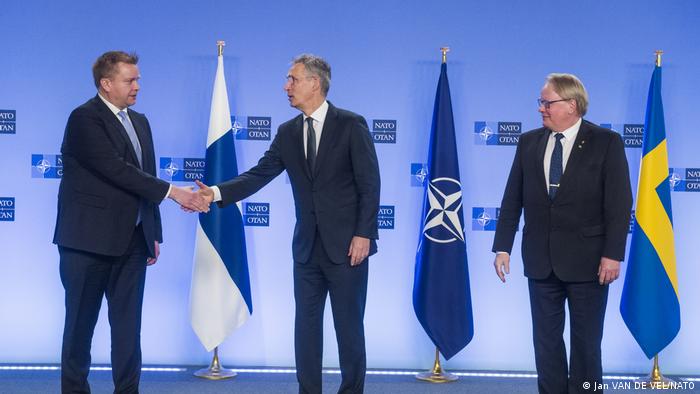 For Finns, rethinking the risks to their independence is not only about the future; it's also about the past. The Soviet Union invaded Finland in 1939. In the Winter War, as now in Ukraine, Moscow justified the attack by saying Finland provoked it. Finns maintained their independence at a huge cost in lives, territory and well-being, fighting virtually by themselves.

They've prepared themselves ever since to do that again, if necessary. In its "whole of society" approach to national security, the country trains the entire adult population to be self-sufficient in any emergency situation, whether caused by nature, industrial accidents or border-busting neighbors. 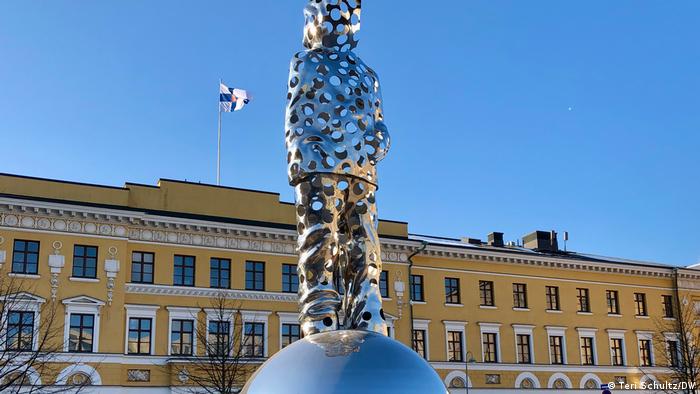 A memorial to the 1939 Winter War, when Finland fought to preserve its independence from the Soviet Union, dominates the Helsinki square in front of the Defense Ministry

In Vantaa, a Helsinki suburb, military reservists work to keep their marksmanship in top shape. In the last month, there are more members practicing than ever, with enrollment in both self-defense classes by the public and training for military reservists jumping dramatically.

Antti Kettunen, chairman of the Vantaa Reservists club, said that in the first two weeks following Russia's invasion, the group's roster grew by 20%, up 250 members. "We haven't seen anything like that before," he said.

"The situation in Ukraine shows that everything is possible. You have to be ready," said Minna Nenonen, head of the Finnish Reservists' Association. "But it's not panic," she explained. "It's only that people want to survive. And now it's time to learn." 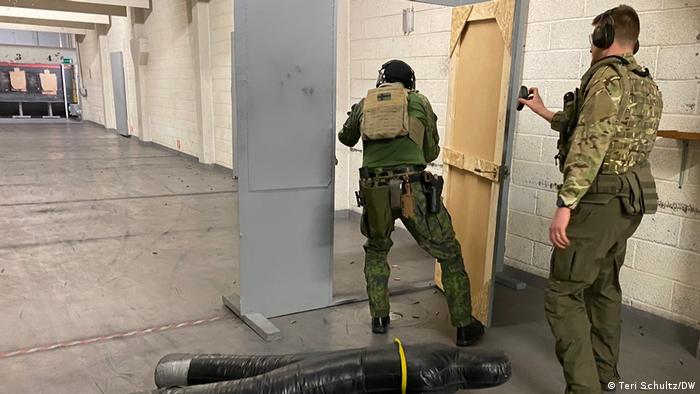 But seeking the extra protection NATO's Article 5 mutual defense clause would provide carries its own risks, which have historically been part of the deterrent to Finland seeking membership. Now, repeatedly, Moscow has explicitly threatened "serious political and military consequences” if the country goes ahead with applying.

Defense Minister Kaikkonen says Helsinki takes the Kremlin at its word. "There would be some kind of reaction from Russia," he responded. "What kind would it be in practice. Impossible to say.”

Given that uncertainty, parliamentary advisor Henri Vanhanen says "it's now or never" for a NATO application.

"If we don't join, then we have to find the reasoning," he explained. "What is the backbone for our security in the future as well? Would our close international defense cooperation with the EU be enough? We don't know."

Vanhanen believes it would be a good move for the alliance, too. "We are not security consumers," he said. With Finland's well-maintained military, full NATO interoperability and key regional location, "we're actually security producers."

But as quickly as the national debate is evolving, Russia may still be one step ahead, said Hanna Smith, director of research and analysis at the European Center of Excellence on countering hybrid threats. Smith points to a March 16 tweetfrom the Russian Embassy in Helsinki.

"Dear compatriots!" says the tweet in Russian. "Please report cases of violation of rights, discrimination and incitement of hatred against citizens of the Russian Federation and native speakers of the Russian language to the consular department of the embassy."

She noted that Putin claimed Russian speakers were being mistreated in Ukraine and that he needed to intervene to "protect" them. "Even if you know this is wrong, [that] this is testing, it does kind of awaken the fear factor," she told DW. "It's very important for us to remember that this is deliberate."

Although Finns are also well-equipped to deal with information warfare, Smith doesn't dismiss the efforts or what may be ahead.

The fate of Ukraine has shown the nation, she said, that "this is serious, this is real and it could happen even to Finland." Smith thinks that will at long last propel the country into NATO.

"If there is a new Iron Curtain coming to Europe," she said, "then Finns hope to be on the western side of that curtain."