The European Union reacted with shock to the death of more than 100 refugees in the Mediterranean Sea. But will the tragedy lead to a change in the EU’s migration and refugee policy? 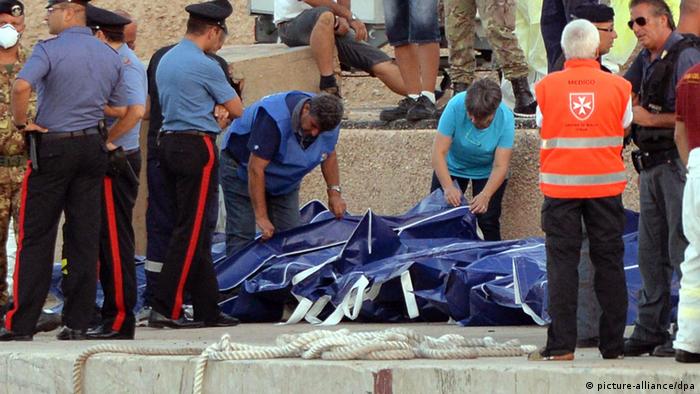 EU officials reacted with dismay to the number of drowned refugees in the waters of Italy's Lampedusa island. But quickly afterwards, the debate about the best way to deal with the issue of refugees was back in full swing.

There are two core issues being debated. One, every EU country has its own refugee and asylum policy. There is no common European stance. Two, most countries try to deter refugees as much as possible. That's why the countries that are most concerned by immigration, such as Italy and Greece, are largely left alone in dealing with the issue.

EU's member states agreed on the existing policies that stipulate that refugees have to file their application for asylum in the country where they first step on EU soil. From a legal perspective, the other member states in the EU are not required to show solidarity. 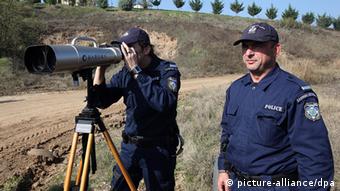 The border between Greece and Turkey is heavily watched

But this policy should not continue, according to EU Home Affairs Commissioner Cecilia Malmström. She has called for a common European refugee policy for years. Since it doesn't exist, all she can do is "urge member states to receive more people who need protection," said Malmström in a letter from New York, where she is currently attending a United Nations meeting.

Her spokesman Michele Cercone said "behind this tragedy and many other tragedies there are criminals and criminal networks who are exploiting human beings in despair." Human trafficking, he added on Thursday (03.10.2013) in Brussels, was a crime that generates huge profits for those networks, "That's why we really have to step up our efforts in order to fight those criminal networks."

Cercone said the coming border surveillance system Eurosur to help improve the situation. As of December this year, it would then be easier to detect even small boats with refugees on board and to rescue capsized ones. But critics believe that the focus will not be on rescuing but on keeping boats from even embarking on their journey to Europe.

Günter Burkhard, director of non-governmental organization Pro Asyl, said the EU Home Affairs Commissioner's reaction bordered on cynical. "Europe closes its borders. And then Europe fakes dismay when the consequences of a long process of strengthening the fortress are beginning to show," he said.

Since the EU's land border with Turkey has been sealed off, refugees increasingly embark on the much dangerous journey across the sea, according to Pro Asyl. Cornelia Ernst, a member of the European Parliament with the Left Party published a statement on Friday: "The European refugee policy focuses on criminalizing migrants, on expulsion and on discrimination. The ruling classes in the EU's member states stop at nothing to defend their wealth against people from other countries." 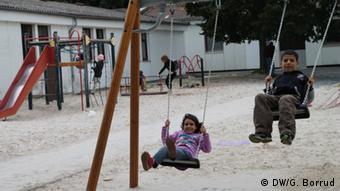 Germany is receiving 5,000 Syrian refugees via a special program

The EU's Home Affairs Commissioner insisted her focus was not on keeping refugees out of the EU. Her spokesman Michele Cercone stressed in Brussels: "We have to make sure that we open more legal ways to come to Europe." That would of course require "very precise and strict conditions." But Cercone criticized the national governments in the EU for considering "immigration as mainly a threat, as a problem," adding that an aging Europe was in need of migrants.

Not everybody agrees - not even in the European Parliament. In mid-September, Monika Hohlmeier, an MEP from the German Bavarian Conservative CSU party, told Deutsche Welle in an interview, "We are receiving small towns every year." Her colleague Nadja Hirsch from the Liberals went on to admit: "It's not a topic that will gain you any support at home."

What is a mass influx?

Martin Schulz, the president of the European Parliament, was outraged about the reluctance shown by the member states: "It's a European problem. I don't accept that there are member states who say 'we're out of room.'"

The Home Affairs Committee of the European Parliament, which is in charge of the issue, is now coming forward with a resolution in which the members call on national governments and on the Commission to start thinking about properly applying a directive dating back to 2001, which has so far not been applied. It regulates "minimum standards for giving temporary protection in the event of a mass influx of displaced persons and on measures promoting a balance of efforts between member states in receiving such persons and bearing the consequences thereof."

If applied, refugees could be granted a residency permit for the time they're in need of protection and be allowed to work. Next week, there will be a debate about the topic in the plenary session of the European Parliament. The EU's home affairs ministers will also consult on the topic in Luxemburg on Monday. But there is still no common definition of what actually constitutes a "mass influx" and it is likely most member states will fight having to receive higher numbers of refugees.