The latest tragedy off the coast of Lampedusa is the worst so far - and it is up to Europe to ensure that it is never repeated, says DW's Andrea Schmidt.

The appalling tragedy off the coast of Lampedusa reveals Europe's shortcomings. There must be an immediate end to the death of innocent people in the waters of the Mediterranean. No one leaves his or her homeland and places themselves in the hands of unscrupulous smugglers without experiencing extreme desperation.

In past years, tens of thousands have attempted to reach Europe by dangerous routes. They have no other choice as legal pathways are barred to them. Refugees attempt to escape from crisis regions in unseaworthy boats, with no food or water to sustain them. 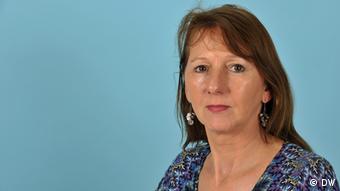 Andrea Schmidt is the head of DW's Swahili Service

Many pay with their lives. If such tragedies are to be brought to an end, Europe must end its rigid closed-door policy and look for solutions that focus on the wellbeing of those who seek protection.

Death outside the walls of Fortress Europe

Italy is just 120 kilometers (75 miles) away from Africa and is one of the main destinations for refugees from African crisis regions. Just like the coastal waters of Greece and Malta, the Italian Mediterranean has also become a death trap for many refugees. The many deaths are evidence that Europe is committing a sin with its policy of creating barriers, backed up by military border controls. The European Union (EU) has even threatened Greece with the reintroduction of border controls if it does not hermetically seal its borders. Why does no one listen to the human rights organizations who have been calling for years for an end to the dangerous practice of human smuggling across the sea and for solutions to be sought?

The widespread indifference in Europe must also end. Countries like Italy must not be left alone. Radical rightwing political parties are already making capital out of the flow of refugees. All European countries must work together constructively to establish a fair and secure method of access for people seeking protection and refuge. The right to asylum is laid down in the constitutions of EU member states. But where do people from Eritrea, Somalia, Afghanistan or Syria get the chance to apply for the asylum to which conditions in their homelands entitle them? For many, the only way to get to Europe is to place themselves in the hands of criminal bands of smugglers.

Problem must be tackled at its roots

At the same time, energetic efforts must be undertaken to improve living conditions in the crisis regions. Refugees from Eritrea have fled a country whose authoritarian regime is among the most repressive in the world and where human rights are systematically violated. The "failed state" of Somalia now has a government but has not yet managed to establish functioning state structures and ensure security within its territory. For years troops from African Union (AU) states have been fighting militant al-Shabab Islamists. They have now taken the fight across the border into Kenya, culminating in the attack on the Westgate shopping mall in the capital, Nairobi, which left more than 100 people dead.

People in crisis regions long for a life in security and peace. They flee from hunger, poverty, war and suppression. It is there, at the roots of the refugee problem, that the international community must take action. Africa is our neighbor. We must help fight poverty where it exists and actively support attempts to bring about democratic change so that people can live securely and with dignity. Until this goal is achieved, Europe must establish a fair and secure means of access for those seeking refuge. The EU's joint asylum system, introduced earlier this year, for which Germany took part in the negotiations, has failed to improve matters. The fact that Italian fishermen or captains who rescue refugees from drowning risk being taken to court for trafficking is evidence of an unparalleled cynicism towards those seeking protection.